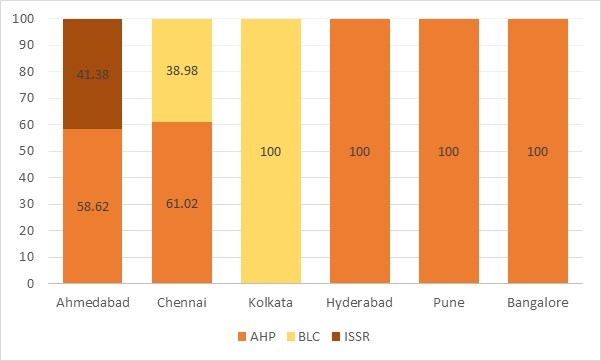 A comparison of the top 6 metropolitan cities shows considerable variations in their approach to PMAY-U.
By Sama Khan  |  December 14, 2020

A comparison of the top 6 metropolitan cities shows considerable variations in their approach to PMAY-U. Three out of the top six cities i.e. Bangalore, Pune and Hyderabad have only sanctioned housing under the scheme’s affordable housing through partnership (AHP) vertical. While Chennai and Ahmedabad have sanctioned a larger share of AHP housing as compared to beneficiary-led construction (BLC) and in-sity slum rehabilitation (ISSR) verticals, respectively. On the other hand, Kolkata is the only mega city that has only sanctioned BLC housing whereas Ahmedabad is the only mega city to sanction ISSR housing. Delhi and Mumbai have not sanctioned any PMAY-U housing till March 2018.