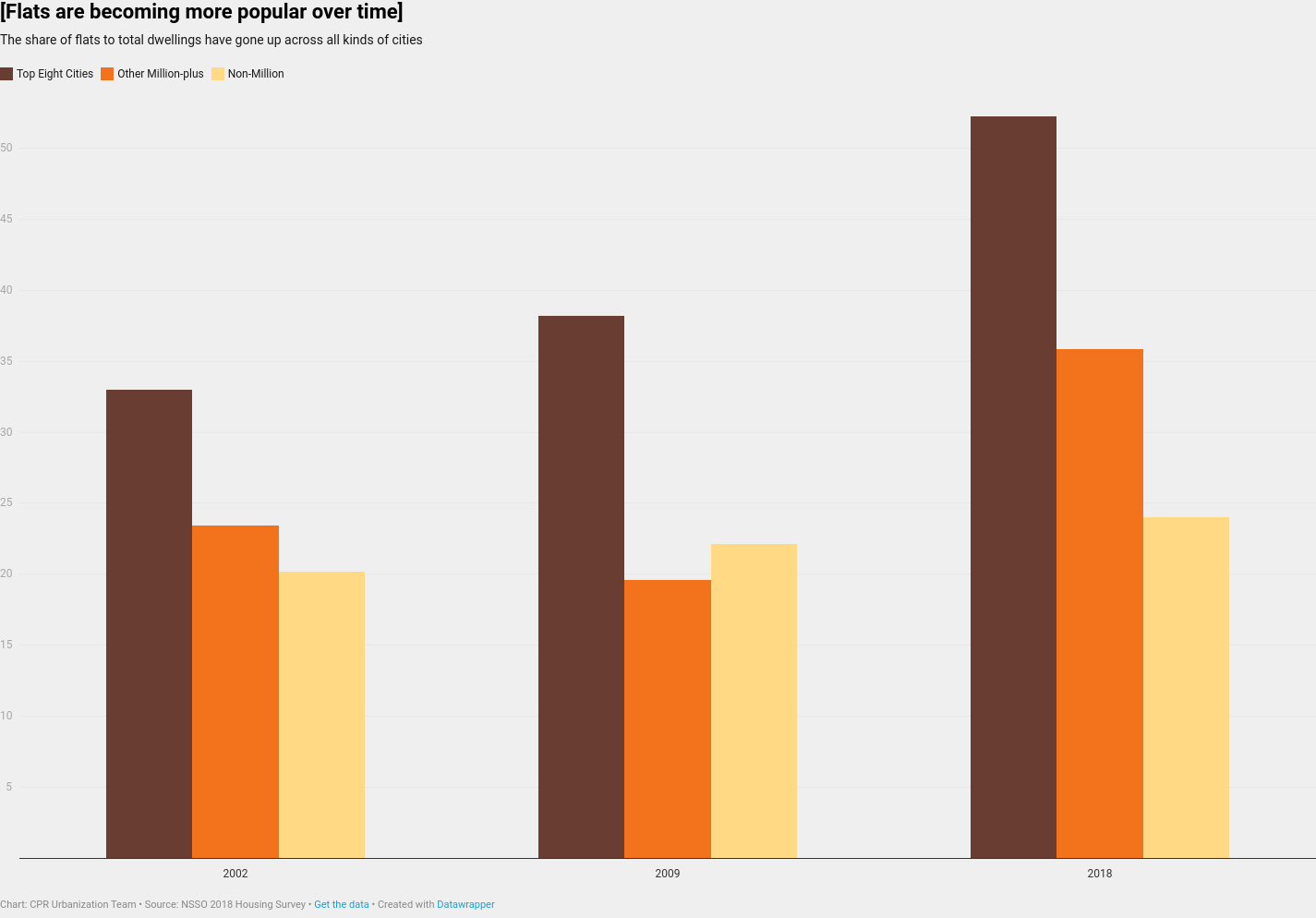 Flats, where multiple households live in the same structure, are increasingly popular and not just in large cities in India. What does the data tell us about the implications of this rising trend?
By Harish Sai  |  August 21, 2020

The building typology of dwelling units in urban areas have undergone changes over time. A notable change is a rise in the share of flats as a proportion to total dwelling units. A flat is understood as a dwelling unit in a built structure that is shared with one or more households. Interestingly, the rise of flat or apartment-style living is not just evident in large metros, but also in smaller cities which have less than a million people. Fig 1 shows that about 24% of the dwelling units in these smaller cities are flats, as per the NSS 2018 housing survey. Overall, these units comprise over a third (31.3%) of the dwelling units in the urban areas. The size of the flats, measured in terms of median floor area per capita, varies from 133 square feet in the top eight metropolitan cities to 120 square feet in the smaller cities.

Multi-storied apartment complexes are certainly a popular housing trend. However, the data shows that the share of single-floor flats have increased over the last decade, more so in the smaller cities. More than 65% of the flat constructions in the smaller cities (less than a million population) are either single or double storied flats, in comparison to 38% in case of top metropolitan areas (Fig 2).

Small cities may not be making rapid transitions to high-rise housing. Nevertheless, flats have emerged as an affordable housing option and are key component in the supply of rental housing in smaller towns. Over 50% of the flats in smaller towns are used for residential rental purposes. As compared to metros, a higher share of flats in smaller towns (8.5%) are also used as employer-provided housing.

More research is required, however, on what segments of the housing market these flats serve. Data seems to indicate that this could be an umbrella category including many types of housing arrangements for different kinds of people. The NSS 2018 housing survey reveals that only 65.1% of the households living in the single-storied flats have access to exclusive in-house latrines, while only 38.4% of them have in-house exclusive access to water (Fig.3). About 15% (3.03 million) of the casual workers in urban areas also live in flats, half of which are single-storied and based on adverse rental contracts (hired dwelling without written contract).