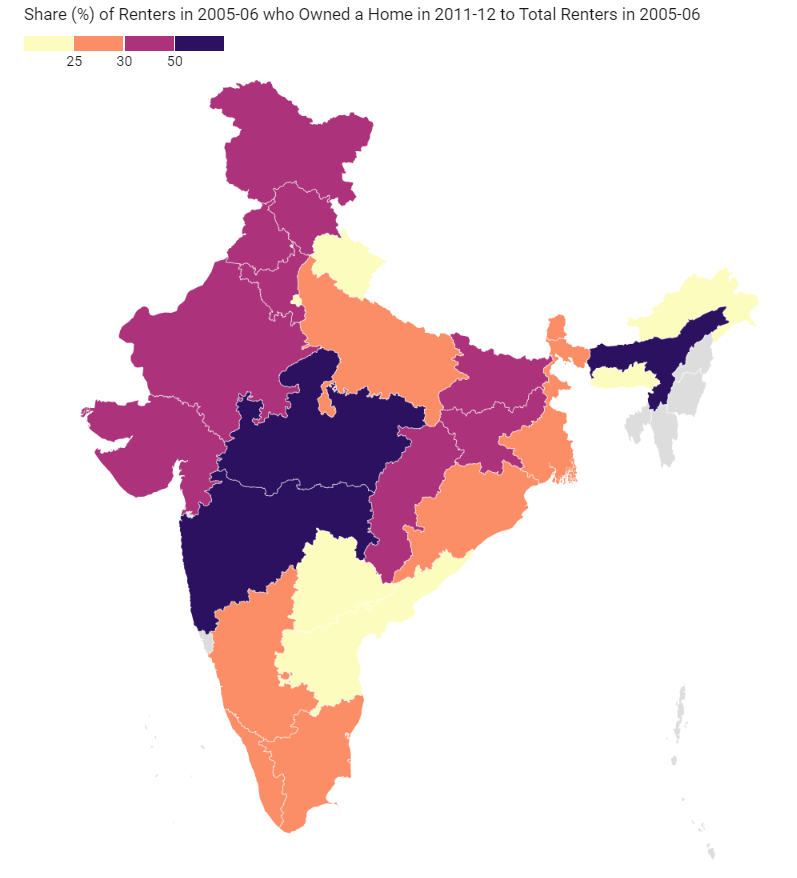 Owners, Renters and Buyers: What happened over time? (Part-1)

This is the first in a series of data tales that looks into the India Human Development Survey (IHDS) panel dataset (2005-06 and 2011-12) to portray certain trends on the nature and profile of house ownership, renting and purchase in urban India. While the previous series provided a comprehensive picture of housing supply in urban India, this one will focus more on the demand side parameters; such as profiles of buyers and renters in the housing market of these cities.

What were the dynamics of the urban housing market in 2011-12?

A comparison of the nature of housing ownership across 2005-06 and 2011-12 shows that about 14.4% of the households reported change in the nature of housing ownership in urban areas (as per IHDS 2011-12), out of which 98% happened in case of households that resided in the urban areas across both the years. While this indicates a not very dynamic picture of the urban housing market in that period, 40% of these households moved from rented to owned houses, and another 36% reported shifting to rented accommodation from owned housing.

The opposite picture can be seen in the case of households that moved from rural to urban areas, as seen in the chart above. This shows the variation in the nature of housing demand of people from different spatial backgrounds in urban India. The households which moved from owned to rented in urban India constituted 34% of the overall rented households in cities, while those who were renting in 2005-06 but bought houses in 2011-12 constituted 7% of the households that owned houses in cities in 2011-12.

Where are people buying houses?

The share of households who were renting in 2005-06 but bought houses in 2011-12 to total rental households of 2005-06 varies across states, as seen in the map below. It is high in the urban areas of Maharashtra, Gujarat, Haryana, Rajasthan or Bihar but comparatively lower in case of some of the urbanized states like Tamil Nadu or Karnataka. This indicates that the house-buying scene has more dimensions cutting through supply-demand chains throughout the country.

The distribution of homebuyers as a share to total rental households in 2005-06 across the urban size-class on 2011-12 in IHDS also shows interesting variations, as visible in the graph below. While moving from rented to owned accommodation is high in the six metro areas: Delhi, Mumbai, Kolkata, Chennai, Bangalore and Hyderabad; about 60% of the households are also seen to be moving from rent to owned outside these metros. This indicates the wide spatial variety of the housing market and also signifies a high share of homebuyers in states like Bihar.