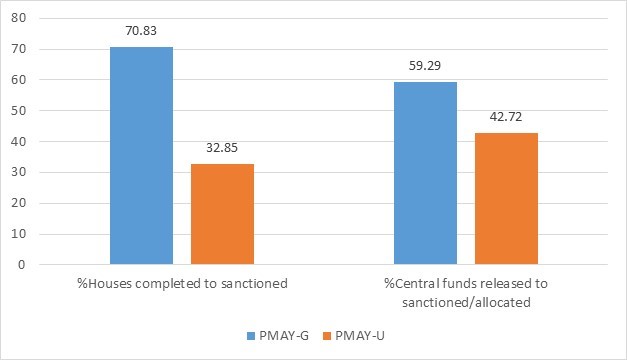 Neither the physical and financial progress of the urban component of the Pradhan Mantri Awas Yojna have fared as as well as the PMAY-Grameen, which focuses on housing in rural India.
By Sama Khan  |  July 9, 2020

Neither the physical nor the financial progress of the urban component of the Pradhan Mantri Awas Yojna has fared as as well as the PMAY-Gramin, which focuses on housing in rural India. Not only have a larger share of central funds been released under the rural component of PMAY, but a larger share of houses have been completed as part of it, as compared to the urban component of the housing mission. There isn’t a stark difference in the share of funds the Centre has released out of the total funds sanctioned for both components. However, there is a substantial difference in the share of houses completed to total houses sanctioned, with PMAY-U faring poorly in comparison.