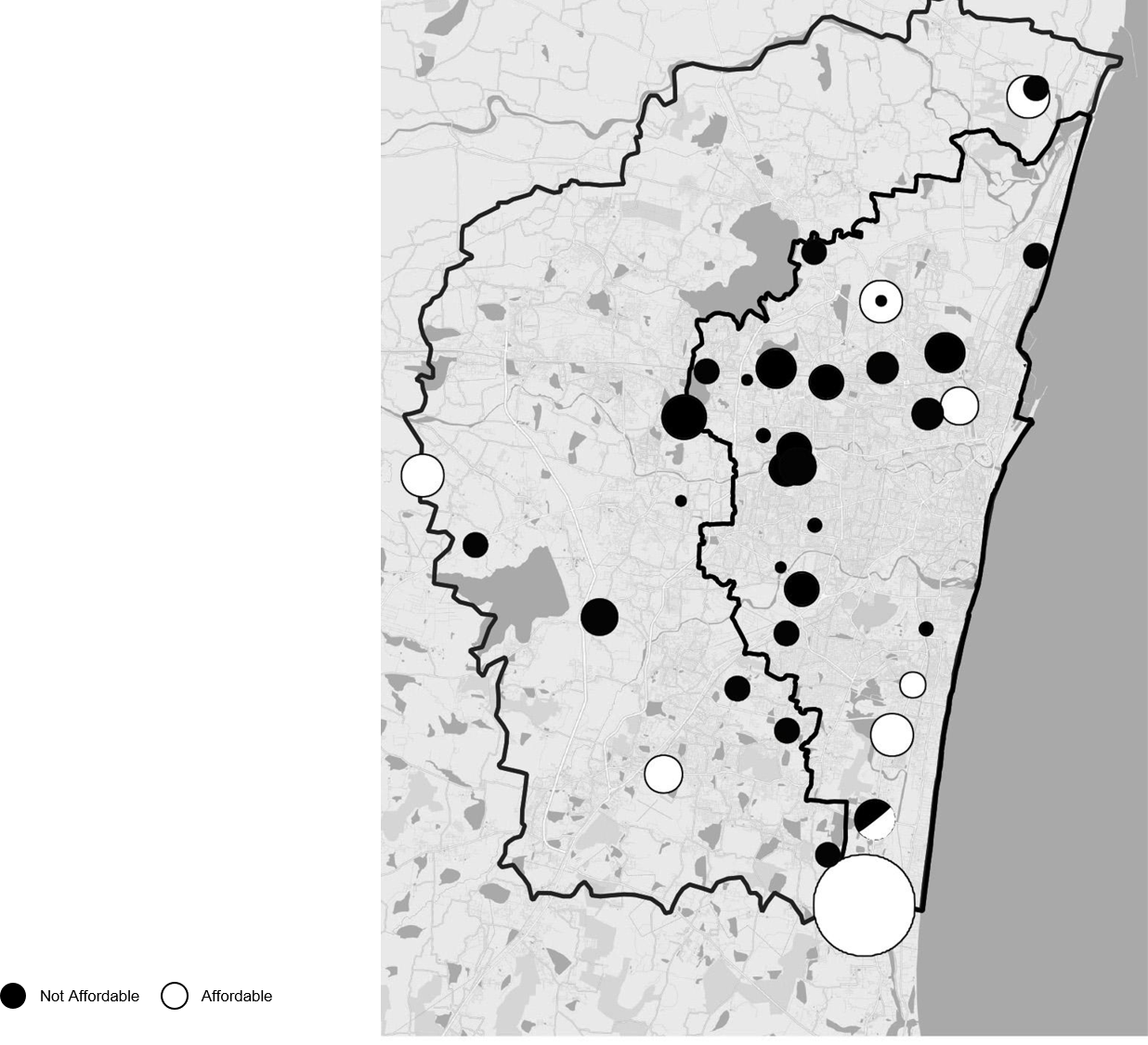 The Geography of Affordable Housing in Chennai

Affordable housing in Chennai means a unit costing between ₹ 8 and 20 lakh (₹8-10.2 lakh for EWS and ₹16-20 lakh for LIG households), based on the Deepak Parekh Committee’s definition of affordability. In practice, however, state agencies as well as private builders define affordable housing by size, referring to units of 300 to 600 square feet.  This approach has contributed to making most “affordable” housing produced in the city unaffordable to EWS and LIG households.
By Karen Coelho, A Srivathsan and Gayathri Pattnam  |  June 4, 2021

Affordable housing in Chennai means a unit costing between ₹ 8 and 20 lakh (₹8-10.2 lakh for EWS and ₹16-20 lakh for LIG households).  This was indicated by a recent MIDS study, which analysed expenditure data from the NSSO’s 66th Round (2009-10) to calculate affordability thresholds for the city, using the Deepak Parekh Committee’s definition of affordability. In practice, however, state agencies as well as private builders define affordable housing by size, referring to units of 300 to 600 square feet.  This approach has contributed to making most “affordable” housing produced in the city unaffordable to EWS and LIG households.

Examining data for the five-year period from 2014 to 2018, our study found that housing in the affordable price range was provided almost exclusively by the government. This was despite decades of efforts by the government of Tamil Nadu to induce private builders to contribute to supply for this segment.

Figures 1 and 2 below show that not only did the public sector account for 91 percent of affordable housing units produced in the city in this period, but that it was a single agency, the Tamil Nadu Slum Clearance Board (TNSCB), that provided the vast majority of this housing. The two public sector housing agencies, the TNSCB and the Tamil Nadu Housing Board (TNHB) together provided 1.2 lakh units of “affordable housing” in Chennai, against a shortage, predominantly in the low-income segment, of 2.99 lakh houses (as calculated from Census 2011 and the NSSO’s latest Housing and Amenities Survey).  Of this, TNSCB accounted for 1.16 lakh “units” – however, most of this (nearly 56,000 units) was provided under PMAY’s Beneficiary-Led Construction scheme, where households simply received a subsidy of ₹1.5 lakh to construct a house. The TNHB, which is mandated to construct housing for all income groups, contributed only 6000 units in this category.

Geographies of price and supply

As the following maps show, affordable housing in the city is increasingly moving to the edges not only of the city, but of the larger metropolitan area. Figure 3 reveals that land prices remain fairly high, at ₹1000-2000 per square foot, even 20-30 km outside the city, especially in the southern and western peripheries. Figure 4 shows that even government housing for EWS households has predominantly been provided in the city’s peripheries, some at the outer edges of the metropolitan area, over 30 km from the city center. The map shows the location of 26088 units built for EWS households between 2014 and 2018, of which 20,332, or 78 percent, were located in resettlement colonies (like Perumbakkam, Gudapakkam and Navalur), more than 20 km from the city center.  Units within the city were mostly part of reconstruction projects in old and dilapidated tenement sites, in which a few new units were provided. While it does not cover the nearly 90,000 EWS units provided under the PMAY scheme, as location details were not available for this stock, over 30,000 units built under this scheme (through the Affordable Housing in Partnership (AHP) component) were also tenements built by TNSCB in the peripheries of the city.

Figures 5 and 6 below show that TNHB housing, located mostly inside city limits, is priced at the same square foot rates as private housing. Unit sizes for TNHB’s LIG housing range from 500 to 750 square feet, with prices ranging from ₹13-50 lakh and a median price of ₹31.3 lakh. The private sector supplies “affordable” housing predominantly through the CMDA’s (earlier) mandate that residential projects over one hectare in size reserve 10% of their area for lower income group housing units, defined as units not bigger than 45 square metres.  Between 2014 and 2018, this mandate yielded around 12,200 units, amounting to around 9% of the total private sector stock produced. However, since the median price for these units was ₹30.2 lakh, a large proportion fell outside Chennai’s affordability ceiling.   For private builders, affordable housing meant units under 600 square feet, which sold in the ₹15-40 lakh range. As Figure 6 reveals, most of the private sector stock built between 2014 and 2018 was located on the outskirts of the city, in the western and southern peripheries, where industrial corridors (IT and automobile) and their associated infrastructure have created thriving real estate markets. Several recent market launches in what the market calls affordable housing are located even outside the Chennai Metropolitan Area, with prices ranging from ₹20-50 lakhs.

With escalating land prices in the immediate periphery of Chennai, there are few affordable projects within 30 km from the city, leaving low-income households effectively priced out of the city.  Figure 7 sums up the affordability profile of Chennai’s housing by showing that the vast majority of its stock, apart from units produced by TNSCB, are unaffordable to its residents.

Dr Karen Coelho is an urban anthropologist and Assistant Professor at the Madras Institute of Development Studies, Chennai.

A Srivathsan is Executive Director, Centre for Research on Architecture and Urbanism, CEPT University, Ahmedabad.

Gayathri is a researcher on urban governance issues, and currently works at the Indian Institute for Human Settlements (IIHS).