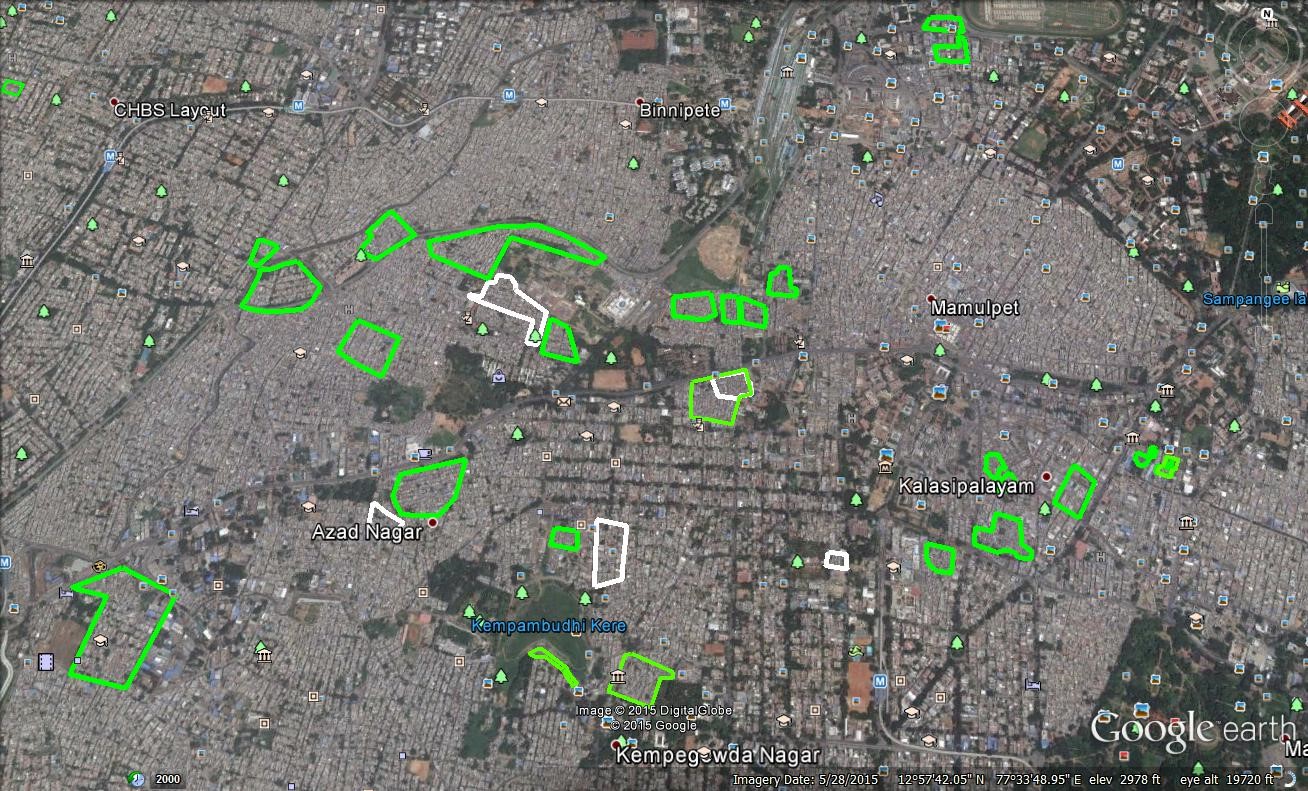 A Continuum of Living Conditions and Property Rights in Indian Slums

This piece summarizes several key takeaways about property rights and informal housing markets from in-depth interviews with key informants, including housing brokers, in 35 slums in Bengaluru. The authors identified at least eighteen different official papers that have been given out to slum dwellers by one or another official agency at different stages in the slum notification process, constituting a tenure continuum. They find that although the legal process for a slum to become notified and for residents to access various individual housing documents is straightforward, ground realities are more ambiguous, and residents as a result misperceive the legal value of their housing status.
By Emily Rains and Anirudh Krishna  |  February 23, 2022

More than 100 million urban Indians live in slums — neighborhoods lacking secure property rights and adequate services — and this number continues to grow as the country urbanizes. This vast group of citizens is uniquely vulnerable, and requires additional attention from policy makers, as a result of their high levels of poverty and informality. Yet, official information on slums is scarce, and the government routinely undercounts the number residing in slums and oversimplifies the wide ranging set of needs across settlements.

This piece and the accompanying Data Tale draw on a massive data collection effort undertaken to locate and study a representative sample of slums (including both those documented and undocumented on official lists) from three Indian cities. Rather than relying on incomplete or outdated data sources, we utilized satellite images to locate slums (Figure 1). We then conducted nearly 10,000 household surveys in more than 200 slums in Bengaluru, Jaipur, and Patna. Our approach and the data collected are summarized in detail elsewhere. To learn more about property rights and informal housing markets in these settlements, we also conducted in-depth interviews with key informants, including housing brokers, in a subset of 35 of these slums in Bengaluru. The rest of this piece summarizes several key takeaways from these data.

A. Characteristics of slums

Slums come in different shapes and sizes, with living conditions varying considerably across neighborhoods. While the least well-off reside in structures constructed from tarp and mud and remain entirely disconnected from crucial resources like water and sanitation, the most well-off slums are virtually indistinguishable from lower middle-class neighborhoods. A continuum of incrementally improving living conditions spans these poles, with key attributes, such as access to municipal infrastructure, housing quality, education levels, and access to stable employment with government benefits increasing along this continuum.

Despite this wide range of conditions, slums share several common underlying characteristics. First, historically marginalized caste groups are overrepresented in slums across cities. While the Indian census reports that Scheduled Castes make up 16%, 17% and 16% of the populations of Karnataka, Rajasthan, and Bihar respectively, we find much higher percentages of Scheduled Caste residents (41%, 35% and 52%) in the slums of these state capitols. To varying degrees, settlements are also characterized by informality, volatility, and persistence.

Perhaps the central defining feature of slums is informality. Many slum residents are “triply informal,” with informal jobs, informal (i.e., untitled) properties, and informal (or no) identity papers. Education levels remain low in these neighborhoods, with residents completing five years of school on average; relatedly, the vast majority of employed residents (91%) work in the informal economy — primarily in low paying and volatile positions. For many slum households, the title to one’s home, too, is not recognized in law. More than 70% of the slum households we surveyed across three cities lack legal titles, limiting their capacity to mortgage their homes or live without fear of demolition. Particularly at the lower end of the slum continuum, slum residents also often lack government-issued identity papers, such as ration cards, Aadhaar cards, and voter ID cards), making it legally impossible to access government assistance.

In general, these informalities increase vulnerability, making it difficult for slum residents to withstand adverse shocks. As a result, slum dwellers’ economic trajectories are highly volatile. While some households experience upward mobility over time, one step forward is too often followed by two steps back. Living conditions fluctuate, with many slum residents ending up at the same level or even worse off than they were previously.

As a result, slum residents often live only one adverse shock away from chronic poverty, and most slum residents remain poor throughout their lives. In fact, many households remain in the same slum for multiple generations, and these neighborhoods rarely develop into non-slum areas. This reality stands in stark contrast to a common misconception, which holds that slums are ephemeral and that, occupied primarily by circular migrants. Most slum residents we surveyed are neither transient nor recent migrants. Nearly 75% are not urban migrants at all, and, on average, our survey respondents have lived in their current home for 20 years.

Yet, while the average slum resident has lived in the same home for decades, we find substantial variation in the types of housing documents they hold, and ultimately, in their level of tenure security. The rest of this piece focuses on variation in property rights in greater detail for the case of Bengaluru.

B. Identifying a tenure continuum in Bengaluru

To further investigate the range of tenure security across slums, we conducted an in-depth examination of property documents and housing market transactions in 35 slums distributed throughout Bengaluru. According to the Karnataka Slum Areas (Improvement and Clearance) Act (“Slum Act”), there is a clear, sequential process for a settlement to officially be declared as a notified “slum.” Once notified, slums are legally eligible to receive municipal services, like water taps and roads, and, it is only after notification that residents become legally eligible for individual titles. Different official documents are issued at each stage of this sequential process. Figure 2 on the left illustrates the notification process and the timeline for issuing different paper types.

In practice, because separate agencies have overseen the notification process, and because the same laws have been applied in different ways by the same agency, we identified at least eighteen different official papers that have been given out to slum dwellers by one or another official agency that we categorize into Type 1, Type 2, or Type 3 papers based on when in the notification process the document should have been issued. The papers acquired at each stage in this process are increasing in value and constitute a tenure continuum. In other words, evictions are less common, residents feel more secure, and properties sell for more where residents have higher paper types. Figure 3 provides examples of each of these types of documents and where they fall on this continuum. A full description of these 18 documents is in the accompanying Data Tale.

While the notification process, as described in the law, is straightforward, the reality is far more complicated. Ambiguity and misperceptions abound among both slum residents and official agencies. For example, we find 19 percent of slum residents in neighborhoods without any of these types of housing documents believe they have full rights to their home, land, or both. In contrast, in neighborhoods where Type 3 documents are prevalent, 17 percent of respondents believe they have no documents to prove their ownership over their house or land.

Official records are also ambiguous. We compared a random sample of 75 slums that we surveyed with each of the official lists of slums maintained by three separate government agencies. We found only two slums out of the 75 for which the three government lists are in agreement with one another about the legal standing of the settlement. In each of the remaining 73 slums, the legal status varies depending on the list consulted.

In light of these ambiguities, policy and practice frequently diverge. Through our investigations, we found many instances where paper types were issued out of order according to the Slum Act. We came upon slums that are not notified but where a significant share of residents have Type 2, and even Type 3, papers — cases where titles have been issued even before notification. Less commonly, we also found notified slums whose residents have only Type 1 papers. Moreover, though services are only legally supposed to be provided after notification, we do not find a correlation between notification status and service access. Nor do we find differences in housing market liquidity among slum residents without Type 3 documents (full titles). Instead, property markets are highly liquid across neighborhoods, regardless of the types of documents held.

Residents of slums that are represented by intermediaries who can mount effective political pressure move more quickly along the tenure continuum. As a retired revenue inspector of Bengaluru’s municipal corporation told us, “There are no concrete rules. Decisions about who has to be relocated, who has to be given hakku patra, all depends on the mercies of officers and leaders… Cases are sped up during elections.” In practice, effective intermediation, rather than the legally delineated process, helps explain which slums get which types of paper.

In our preliminary examinations of property rights in Jaipur and Patna, we observe differences in the legal processes for slum recognition, as well as in the types and numbers of papers issued to residents. However, our initial inquiries support our key takeaways across cities: not only are misperceptions pervasive but, in practice, incremental property rights are also acquired with the help of political intermediaries.

Despite the vast and growing number of Indian citizens living in urban slums, there is little systematic evidence on the range of lived experiences for this population. We collected original data in order to learn more about the range of neighborhood characteristics and property rights across slums in three cities. We find that, in Bengaluru, there is a plethora of official documents that can be arranged along a tenure continuum. Though the legal process for a slum to become notified and for residents to access various individual housing documents is straightforward, ground realities are more ambiguous. Different agencies distribute and recognize different papers, and residents misperceive the legal value of their housing status.

Better understanding about slums in general, and informal property rights in particular, is necessary for designing and implementing more effective upgrading projects. Attempts to improve tenure security in slums must begin with a careful understanding of the local, often ambiguous, factors that impact how property rights are acquired and perceived.

The authors would like to thank the International Growth Centre and Omidyar Network for funding and analytical support. Shafali Sharma provided excellent research assistance on the housing inquiry. We would also like to thank Mohammad Mansoor, Selvam K, Ramesha, and Sujeet Kumar for skilled interviewing.

Sections B and C of this piece draw heavily upon the discussion in Krishna, Rains, & Wibbels (2020).

Emily Rains is an Assistant Professor of Political Science at Louisiana State University.