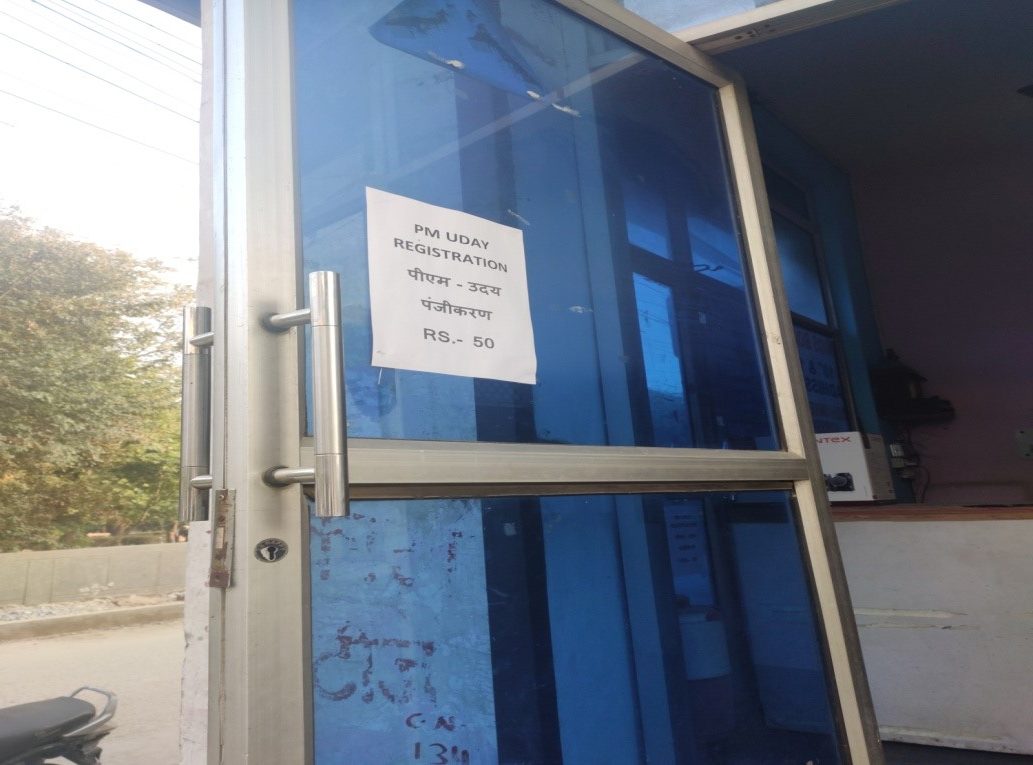 Regularising Delhi’s 1639 unauthorised colonies has been a regular issue in Delhi’s assembly elections for many years now. Based on field research carried out in the Uttam Nagar area of west Delhi during the months of January and February 2020, this piece helps to understand what the promise and process of regularisation has involved, and how it has played out for the residents before the Delhi elections of 2020?
By Asaf Ali Lone  |  June 19, 2020

Regularising Delhi’s 1639 unauthorised colonies has been a recurring issue in Delhi’s assembly elections for many years now. The regularisation process, which is supposed to benefit a very large number of people living in these colonies, started way back in 2007. It has proceeded slowly since then, primarily due to a lack of clarity on the division of institutional responsibilities between the various levels of government in Delhi, which are controlled by different political parties. This time around, a Bill was passed in Parliament in 2019, placing the responsibility on the Delhi Development Authority (DDA), currently run by the Bharatiya Janata Party (BJP), and the issue momentarily took up speed just before the Delhi elections of 2020. However, it could not become a major issue that caught popular imagination, and the BJP did not perform well in the election results.

To understand why, one has to understand what the promise and process of regularisation involved, and how it played out for the residents of these colonies on the ground before the Delhi elections of 2020? This note attempts to do so through some insights from fieldwork carried out in the Uttam Nagar area of west Delhi during the months of January and February 2020.

Uttam Nagar, located in West Delhi, has as many as 140 unauthorised colonies which have grown into a prime affordable real estate market and a good example of incremental housing in Delhi. Electorally, Uttam Nagar area falls into three constituencies, Vikaspuri, Uttam Nagar and Matiala, in the Delhi Vidhan Sabha. The Aam Aadmi Party (AAP) won all three constituencies in the Delhi state elections in 2015, and retained them in 2020.

The 2019 scheme for regularisation, called Prime Minister-Unauthorised colonies in Delhi Awas Adhikar Yojana (PM-UDAY), was launched by Delhi Development Authority (DDA) with much fanfare and publicity, highlighting the contribution of the Ministry of Housing and Urban Affairs under the Central Government. Just days after the launch of PM-UDAY portal and application process, the images of the colonies with satellite images taken in 2015 were shared on the DDA’s twitter handle. It could be seen as an act timed just before the elections to make it a spectacular achievement of the BJP in Delhi. But somehow it could not capture the imagination of the Delhi voter.

Vashu Vihar Colony, Holambi Kalan, New Delhi, is one of the unauthorized colonies whose mapping for delineating the boundaries is completed. This has been uploaded on the portal launched by Hon’ble Minister @hardeepSpuri on 23rd Nov’19. pic.twitter.com/oFnyxet4CB

Fieldwork in Uttam Nagar revealed that on the ground, people were aware of the fact that registries of the houses and the regularisation process were being conducted by DDA through the BJP-run Central government. At the same time, they were also conscious of the fact that this had nothing to do with actual services or infrastructure in the colonies. Rather, they vaguely understood it as a process of ‘legalizing’ their properties.  The residents of these colonies were aware that this Bill gives them already promised legal recognition by previous governments that has been impeding for a long time now.

Residents I met in Uttam Nagar told me that the MLAs of AAP in the area were approachable and have worked on major issues of the area since 2015. Even those who identified as BJP supporters mentioned that AAPs work in the area is very much visible. Thus, if the regularisation process started by BJP could not take the limelight in the 2020 election, it was largely because its impact was not able to show on the ground before the elections. People whom I met during my fieldwork also mentioned that it would have no impact on the everyday lives of the people living in the area, as they were conscious of the fact that regularising the area would not make the streets wider and the area less congested.

During my fieldwork in Uttam Nagar and my conversations about regularisation process, people I spoke to were aware of the process, but were not as enthusiastic about it as the Central government and BJP’s leadership. During one conversation, a respondent mentioned that the area has already been built up and is very congested, the lanes inside these colonies doesn’t have even space for ambulances to enter. They were very skeptical about the regularisation process changing the status of the area and mentioned that before every election this issue crops up but nothing happens afterwards. One respondent told me that normally, whenever they used to go to the MLA or MP (Member of Parliament) or Municipal officers with their issues, they would be told that this area does not fall under their jurisdiction and so nothing could be done. But just before the elections everyone comes to them and asks them about their problems, suddenly it becomes their problem to solve.

The residents also mentioned facing many problems for constructing houses in the area. They require permissions from local authorities (police and municipality, both administered by the BJP), for which they have to bribe the authorities every time, otherwise, they can’t start construction. Another major issue that people in these colonies face is the issue of loans. It is very difficult to acquire loans if your property doesn’t have a conveyance deed or a registry, which was the situation in Uttam Nagar due to these colonies being unauthorised. The process of regularisation guarantees the residents in these colonies the title and registration of their properties in their names, and will thus facilitate financial inclusion.

Respondents told me that the process for registration of the individual buildings had already started. People were applying for registering their properties on DDA’s online portal, after which DDA officials  would call them up and come to their properties to do the verification. They mentioned that some officials from DDA have come to their buildings and done the survey and verification of their house, including the mapping of the plot. I also found a cybercafé which charges a certain amount to apply on behalf of the residents on the DDA’s website.

One of the respondents said that verification has started but no registries have happened so far. He mentioned that in a few colonies here in Uttam Nagar the rates of the property are higher because they have registries, approved land-plans and are standard colonies. In these approved areas, the rate for 1 gaj (a Hindi term for a square yard) is 1 lakh rupees while as for unapproved areas it starts from 40 thousand rupees per gaj. Regularisation also seems to increase demand: a broker told me that one property which had been lying vacant for a long time now in an unauthorised area is now receiving calls to sell it from many clients after the regularisation process started.

It is important to note here for residents living in unauthorised colonies, the regularisation process is seen as an entitlement due to citizens and voter, but also signifies an aspiration for a better life. The entitlement as a citizen comes from the right to city and the claim to the equal status while comparing their status with the residents of the neighboring planned or regularised colonies of Janakpuri and Vikaspuri. These unauthorised colonies have been built incrementally over the period of years by the people through the invisible presence of the state. As they are built in violation of planning norms, this makes them vulnerable to the gaze of the state and its intervention.

One respondent who is a broker as well as a resident in the area mentioned that his colony has been regularised now but the rules were still unclear; despite having applied for his house’s verification, no one from the DDA has visited his house yet. He also said that if some property has any issues, their RWA members go with the resident to the local office of DDA and gets it resolved, adding that the title of the property and land-use has till now not been changed; meaning it is still not freehold and the government can takeover anytime. Thus, there have been many loopholes in the process of regularisation: though people affected by it are a significant number, at the end of the day it still has not delivered to people the benefits that are missing from their everyday lives.

People in these colonies very pointedly speak about the missing services, lack of space, lack of infrastructure, and planning in the area. The colonies have been self-built incrementally, and services like drinking water, electricity, sanitation and drainage gradually implemented in the area through the intervention of local activists, MLAs and other actors. While there are still issues, provision of these services translated into major electoral benefits for the MLAs of the area who are from AAP.

One of the main reasons that the 2019 regularisation process could not give BJP a foothold in the 2020 Delhi elections was that it did not solve everyday problems of residents of the unauthorised colonies. The story of Uttam Nagar tells us that challenges faced by residents including overcrowding, lack of recreational spaces, inadequate sanitation and healthcare etc, still persist in these areas. The primary reason that residents have been pushed to live in these unauthorised colonies is also because DDA has failed to provide an alternative to such housing arrangements. Delhi still lacks a good plan for affordable, adequate and equitable housing for its burgeoning population as the city keeps spreading. In the future, a lesson for political parties could be that the issue of housing needs to be seriously and comprehensively addressed, not just through piecemeal efforts immediately prior to an election.