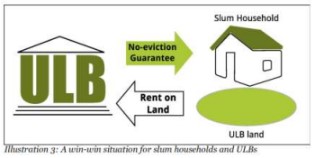 Housing is one of the basic necessities of life and the right to housing and adequate shelter is guaranteed in the Directive Principles of State Policy enshrined in the Constitution of India.
By IHR Team  |  April 28, 2020
Download

Housing is one of the basic necessities of life and the right to housing and adequate shelter is guaranteed in the Directive Principles of State Policy enshrined in the Constitution of India. The rapid pace of urbanisation in India has resulted in severe shortage of housing and basic services like potable water, well laid out drainage system, sewerage network, sanitation facilities, electricity, roads and appropriate disposal of solid waste. The urban housing shortage was estimated to be 18.78 million3 during the 12th Plan period with consequent increase resulting from intense urbanisation in future years. Provision of affordable housing has been a priority area for the Government of India; however, providing housing to all on ownership basis is difficult and may not be possible. The fact that a large percentage of households live in congested condition, indicates that a large section of population find decent and adequate housing unaffordable.

The growing urban housing shortages in India provide the rationale for policy focus on promotion of rental housing in urban areas which has been recognized by the National Urban Housing and Habitat Policy (NUHHP), 2007. This policy intends to promote sustainable development of ownership as well as rental housing stock in the country with a view to ensuring equitable supply of rental housing at affordable prices to all sections of society. Given the magnitude of housing shortage and budgetary constraints of both the Central and State Governments, it is amply clear that efforts of Public Sector alone will not suffice in fulfilling the rental housing demand. In view of this scenario, the National Urban Rental Housing Policy (NURHP), 2015 focuses on a multipronged approach such as enabling legal and regulatory measures, encourage involvement of Private Sector, Cooperative, Non-Governmental Sector, Industrial Sector (for labour housing) and the Services/Institutional Sector (for employee housing), to promote rental housing. The Policy seeks to promote various types of public-private partnerships for promotion of rental housing in the country which will act as a catalytic force to achieve the overall goal of Housing for All by 2022.

Urbanization is an undisputed driver of the process of economic growth. In tune with the global trend, India is undergoing through a process of rapid urbanisation. Whereas the total population of India has grown 3.4 times during the period 1951 to 2011, the urban population has grown 6 times during the same period i.e. from 62.4 million (1951) to 377.1 million (2011). The increasing pace of the urbanisation process could be gauged from the fact that whereas the overall population of the country grew by 17.64% during the decade 2001-2011, the urban population increased by 31.8% during this period.

Housing is not mere provision of four walls and a roof but it also requires to be supplemented by access to basic amenities such as water and sanitation, thereby offering a sense of privacy, safety, dignity and better living. The right to housing and adequate shelter as guaranteed in the Directive Principles of State Policy enshrined in the Constitution places an obligation on the Governments to ensure housing for all. With the rapidly increasing population of urban areas, the gap between supply and demand of the housing has been ever widening with increasing prices of real estate sector. Urbanisation in India is characterised with massive shortage of housing specifically towards the Economically Weaker Section (EWS) and Lower Income Groups (LIG), who are heavily dependent on governmental support for housing.