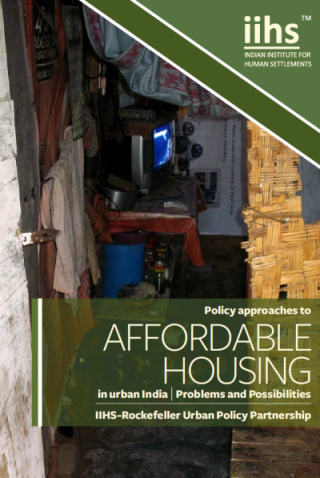 In this paper, the authors lay down what they understand as “affordable housing”— a term that can mean many things to many people— and present a set of empirics to locate their understanding of affordability. Following that, they sets out ten dynamics that are often seen to be at the root of why extreme housing inequalities persist in Indian cities. For each, they outline existing debates, suggest policy responses and interventions and, at times, mark the medium- and long-term structural changes required. Finally, they summarize by a necessary partial translation into action and locate their suggested interventions with particular institutions and different scales of government.
By Gautam Bhan, Geetika Anand and Swastik Harish  |  July 22, 2015
Download

This paper has three foci.

The first is housing policy. By this we mean that we are concerned with particular forms of public action, the specific instruments used in order to carry them out, and the actors and institutions tasked with doing so. Such a focus does not imply that we believe that policy actions more powerfully control or direct housing as opposed to, for example, the market or self-built housing by communities. It implies only that our focus is on how and to what ends policy makers and public institutions must act precisely given that they are just one part of the various dynamics influencing urban housing. Our focus is on urban areas in which we include peri-urban growth. We look at policy across scale of action – local, city, regional, state and central – as well as domains of practice. We consider a range of approaches and interventions from regulations to incentives, rights and entitlement frameworks to missions, projects and plans. We consciously remain quite closely tethered to current frameworks of urban policy in India – actually existing practices, policies and paradigms. This limits our room for maneuver. While it implies that many of our suggested policy responses and interventions are feasible without radical changes to the existing policy and political landscape, it also means that we are unable to propose certain systemic and far-reaching changes as powerfully as we’d like. We have attempted to balance the need for pragmatic and immediate action with slow, medium- to long-term structural change as far as possible throughout. In this paper, however, we have chosen to emphasize the former. This is a paper then that takes seriously the imperative to act amidst uncertainly and imperfect policy paradigms.

The second focus of this paper is to think about a particular object—“affordable housing”— that is an emergent and critical policy terrain. The term has gained increasing attention in recent years within policy circles. States from Rajasthan to Karnataka are passing what are called “Affordable Housing Policies;” the Reserve Bank of India has declared priority sector status to “affordable housing;” the erstwhile JNNURM made it a focal goal through the Rajiv Awaas Yojana (RAY), and the proposed Affordable Housing programme in the Modi-led BJP government implies that policy attention and resource allocations will, in fact, deepen in the near future. Indeed, the current government’s commitment to “Housing for All by 2020” will inevitably require a successful tackling of widely acknowledged inequities in access to decent housing in Indian cities. Again, this does not imply that “affordable housing” represents an isolated, coherent object within housing that can be targeted separated from the rest of the sector. Yet the claim of this paper is that both the particular nature of challenges in reducing inequities in access to affordable housing as well as the existence of a policy track that seeks a set of directed interventions, make a focus on affordable housing relevant, important and necessary. It does mean, however, that the discussions that follow cannot be read in isolation as a set of  “best practices” or “toolkits” that will “fix” an affordable housing problem. That is not our intention.

Third, we have chosen to address policy questions through responses to a set of “dynamics” that we believe are particularly relevant to thinking about affordable housing in Indian cities. We address these generally, laying out the debates within each and then suggesting approaches, responses and interventions. We do not focus on particular cities, regions or states. We are aware that contexts vary quite extensively across cities and therefore our discussion of different dynamics will not have the same relevance, effectiveness or salience across city-regions. Our hope is that these sets of dynamics will offer a set of relevant questions that must be asked from within different cities and states, adapted to their contexts, evaluated anew and then applied.

This paper was originally published in 2014 by the Indian Institute of Human Settlements.