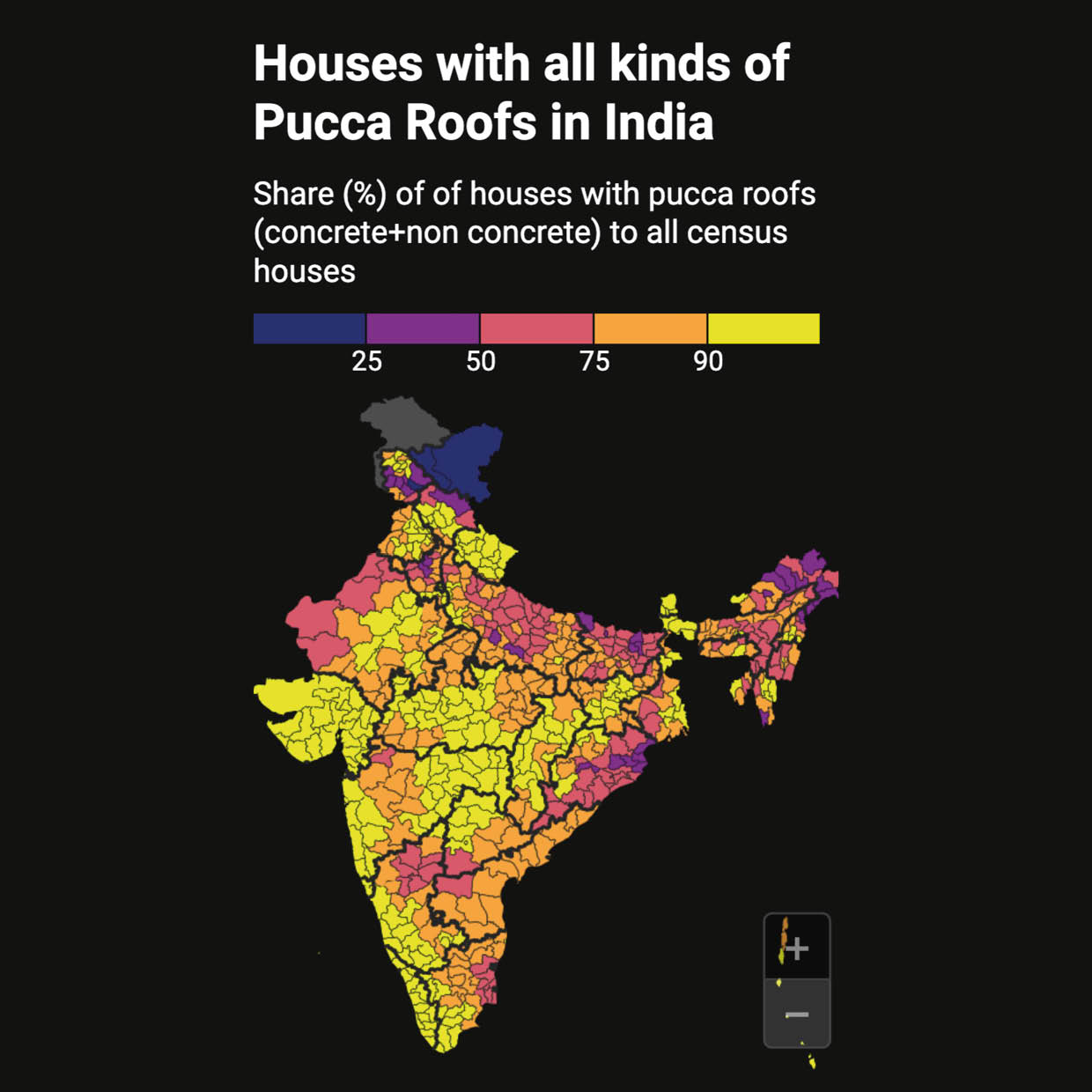 Successive governments in India have pushed for the construction of ‘pucca’ houses to improve the quality of low-income housing. The pace picked up during the PMAY, a large-scale program on house building that started in 2015. The total number of completed houses under the program in rural and urban areas is nearly 25 million, which is about 11.1% of the housing stock in India. This tale, investigates two questions—how does the notion of ‘pucca houses’ manifest in different regions in India; and what are the changes that happened in this landscape after PMAY implementation.
By Samridhi Agarwal and Shamindra Nath Roy  |  August 24, 2022

Successive governments in India have pushed for the construction of ‘pucca’ houses to improve the quality of low-income housing. The pace picked up during the PMAY, a large-scale program on house building that started in 2015. The total number of completed houses under the program in rural and urban areas is nearly 25 million, which is about 11.1% of the housing stock in India, and higher than the share of social rental housing in the European Union (9%).

Spatial diversity is an aspect that distinguishes the PMAY. Under both the rural and urban verticals,  the scheme covers settlements across a range of scales, starting from the villages to an exhaustive set of small and medium towns and the largest cities. The PMAY offers four different modes of construction, under which self-construction through the ‘Beneficiary led construction’ (BLC) model enables a variety of building types, allowing for culturally diverse modes of house building that involve a variety of materials beyond the conventional Reinforced Brick/ Cement Concrete (RBC/RCC) structure of pucca housing.

In this tale, we have investigated two questions—how does the notion of ‘pucca houses’ manifest in different regions in India; and what are the changes that happened in this landscape after PMAY implementation.

We looked at the urban and rural typologies of pucca houses in terms of roofing materials over time, from 2011 to 2019-21, to understand the variation in pucca housing typologies over time. PMAY’s BLC component has substantively augmented supply, adding 2.9 million housing units in urban areas and 19.3 million housing units in rural areas since 2015. Therefore, a temporal view also helps understand how the scheme has impacted housing quality.

Before we get into the analysis, a word of caution about the data. Since NFHS is a survey focused to capture health and family welfare characteristics of households, information on house-building materials are collected as associated information in the dataset. However, given the large sample size of the data (6,36,699 households), we believe the numbers derived from it can be considered as representative at the state level. The second factor is regarding comparing the share of households with pucca housing varieties across the Census and the NFHS survey—though not strictly comparable, we have only considered the relative shares across states over time to provide an idea of summary changes over time. We have avoided district-wise analysis because this would require comparing the districts over time and across the two datasets, adjusted by their areal changes–which would lead to varied assumptions regarding the comparability of a survey data with Census and over time.

For this short analysis, we have grouped the roofing materials across two categories—concrete and non-concrete. The first one includes materials like reinforced cement or brick concrete (RCC/RBC), while the other one consists of hand-made and machine-made tiles, burnt brick, stones, slates and GI Metal or Asbestos sheets. Houses constructed by these two main categories of roofing materials are termed as pucca houses, while any other kind of houses are termed as ‘kutcha houses.’ These combinations are based on our findings of geographical differences in using these roof materials for constructing houses in India.

We have used the Census 2011 data to look at the spatial distribution of houses with different kinds of pucca materials. The share of houses with pucca roof materials, both concrete and non-concrete is high across the board—with the national average hovering around 80%. The share of houses with pucca roof materials is high all across Gujarat, Kerala, coastal Maharashtra and Vidarbha regions, the hilly states of Uttarakhand and Sikkim, coastal Odisha and Gangetic West Bengal, and scattered areas across central India. However, distinct patterns emerge if we start delving into the nature of materials used to construct the pucca roof in these places—the share of pucca houses with concrete materials in both rural and urban India is higher in districts of Gujarat, Haryana, Punjab, and coastal Andhra Pradesh; but not so high in MP, parts of Maharashtra, Chhattisgarh, parts of West Bengal, coastal Karnataka and North-East India. The share of non-concrete roofing materials, beyond the traditional RCC or burnt-brick structure, is high in many of these districts—e.g. in the districts of most of the states of North-East India, the predominant roofing material are metal/GI or Asbestos sheets. In coastal Maharashtra and Karnataka, machine-made tiles constitute the larger chunks of the pucca roofing material. This differentiated patterns of building materials reflect the climatic and cultural diversity that impacts housebuilding practices across India. However, there are urban-rural differences—while the share of concrete roofs is higher in the cities in general, many places like Madhya Pradesh, Rajasthan, coastal and inland Karnataka have registered a lot higher share of concrete roofs in urban areas than the total share of concrete roofs in general.

Visualization 1: Houses with all kinds of Pucca roofs in India

The larger regional differences in ‘pucca typologies’ have become narrower after the implementation of PMAY, though there are differences across the space. In rural India, the share of houses with pucca roofing materials to total houses has increased from 79% to 84% between 2011 and 2019-21. Much of this growth is attributed to the growth in concrete materials, which increased from 18.3% of the total pucca roofs in rural areas to 41.4%. In the case of urban India, the convergence is more—while about 55% of all the pucca roofs in the census houses were constituted by the RCC/RBC or similar concrete materials in 2011, the share rose to 73% in 2019-21. This progressive transformation to concrete-based structures is one of the interesting features of house-building in India.

The all-India patterns of increasing similarity in housing typologies over time do not hold if we look into the North-Eastern states of India (Assam, Arunachal Pradesh, Nagaland, Manipur, Mizoram, Tripura, Meghalaya and Sikkim)—where roof building through non-concrete materials are more common. The share of concrete materials to total pucca roofs was 1.4% in the rural areas of the North-East, which increased to 2.8% 2019-21. In the case of urban areas of the region, there is a little more convergence—while 16.9% of the census houses in Census 2011 used to have concrete roofs, the share only increased to 22.1% in 2019-21. This is different from all-India trends and significant in illustrating how diversity in housebuilding has been taken into account under PMAY. About 9,47,340 new houses have been delivered under PMAY-U and PMAY-G in the North-Eastern states, which constitutes about 4% of the total PMAY construction to date.

Visualising the Share of Concrete and Non-Concrete roofing materials to all houses:

Samridhi is a Research Associate working with Yamini Aiyar and Mekhala Krishnamurthy on their research projects and is part of the State Capacity Initiative. She holds a Bachelor’s degree in Economics from Daulat Ram College, University of Delhi, and a Post Graduate Diploma in Economics specializing in Public Policy from the Meghnad Desai Academy of Economics, Mumbai. Her research interests lie in studying the intersection of the social sector with poverty and inequality, understanding the systemic and structural issues, and the state’s role that governs growth and development with an interdisciplinary focus.