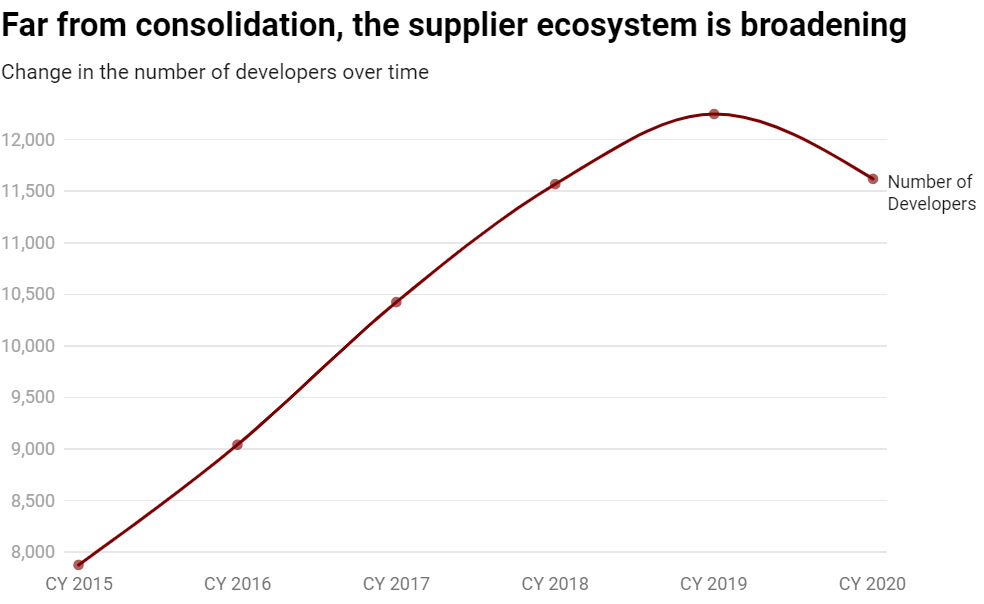 The myth about consolidation in real estate

The common narrative of most talk shows, media articles, and investor presentations suggests consolidation in the real estate market in recent years. The general perception is that demonetization and introduction of RERA and GST compliances have made real estate a business of deep pockets where smaller developers have been or are being acquired by the large developers and there is massive consolidation in the market. However, data from Liases Foras shows a completely different story.
By Pankaj Kapoor  |  June 24, 2021

The common narrative of most of the talk shows, media articles, and investor presentations suggests consolidation in the real estate market. The general perception is that demonetization and introduction of RERA and GST compliances have made real estate a business of deep pockets, with smaller developers having been or being acquired by large developers resulting in massive consolidation in the market. However data from Liases Foras shows a completely different story.

This piece analyses the consolidation theory from three angles.

Since most of the above-mentioned interventions were introduced post-2015 (demonetisation in 2016, RERA and GST came into force in 2017), we decided to look at data trends from 2015 from the perspective of the above three questions.

Liases Foras has been tracking the real estate market across 60 cities in India, monitoring active projects’ performance in primary marketable supply.  As of December 2020, there were 11,620 developers with 17,022 active projects. The definition of marketable supply is that the developers should have unsold inventory for those projects, and he is offering them for sale in the market. Thus this consists of only primary supply and does not include resales or proposed supply.

Data shows a steady increase in the number of developers from 7,876 developers in 2015, growing over 50% to 12,249 by 2019. The number of builders has been increasing every year, except during CY 2020, which has reduced numbers of developers with active supply largely on account of the Covid-19 impact. Instead of consolidation, the trend suggests that the real estate market has been broad basing all these years.

The value of the stock sold also shows similar trends. The annual value of sales contributed by all the builders show an upward trend. In contrast, the percentage share of top builders witnessed a decrease, especially from CY 2018, which shows a broad-based market when smaller developers increase market share.

The question that then arises is when there are amalgamations, why is the number of developers not decreasing? The answer is that joint ventures or amalgamations are happening at the project level and not developer level. For example,  a Mumbai-based developer, Nirmal Group, who had nine marketable projects, has given three of his projects for the development and sales to three different developers, namely, L& T Realty, Shapoorji Pallonji, and Godrej Properties. These projects have shifted from the books of Nirmal to these three developers’ books, while all four developers existed despite the amalgamation.  The Nirmal group is still managing six of its projects. Most of the amalgamations are such.

RERA has acted as an enabler and helped the market to become broad-based. It has enabled smaller performing developers to access credit facilities from the financial institution. Our experience working with lenders also suggests similar trends. The incentives brought to boost affordable housing under PMAY have also helped smaller developers. While large developers launched mega townships, mostly far away in the peripheral locations, smaller developers offered affordable housing in much interactive and end-usable locations. Their pricing, product mix, and location cater to local needs more efficiently.

Housing production in tier 2 and tier 3 cities are growing much faster than in tier 1 cities. As the figure below shows, smaller cities' contribution to the Indian real estate landscape has been steadily increasing over the year.  Sales in Tier 1 cities grew 22% between 2015 to 2019; during the same period, sales in Tier 2 cities grew 73%, from 59,390 in 2015 to 76,466 units in 2020. While Covid-19 has impacted the demand for tier 1 cities, it has benefited the smaller towns. Work from home/hometown has triggered the phenomenon of spatial diffusion of jobs. The high cost of living, densities, and experience of remote working abilities coupled with cost benefits suggest that the jobs will move to places where people live.

Tier 2 cities are slated to grow faster with the government's boost for the manufacturing sector. The Finance Minister in the 2021 Budget committed an infusion of Rs 1.97 lakh crore for the manufacturing industry. With land and labour costs being cheaper in tier 2 cities, manufacturing units are more likely to operate from these cities thus driving their economic growth. This in turn will further boost housing production and credit growth to the broader region of the Indian economy.

Rather than consolidation, the landscape of housing is expanding and will continue growing. Smaller developers of tier 2 and tier 3 cities will play a significant role in broadening housing and housing finance in India.