On June 7, Supreme Court reiterated its order of February and April 2020 to evict the Khori Gaon basti on the Delhi-Haryana border, falling within the Faridabad Municipal Corporation (FMC) jurisdiction. The Court concluded that this basti is an encroachment on the Aravalli forest land and so deemed it fit to order the municipal corporation to undertake evictions using force if needed. The residents have been given a few days to collect their belongings and leave before the demolition squad comes to vacate these lands. The demolitions of over 6,500 homes are scheduled to take place just when the monsoon arrives and we are still in a pandemic where most of the population is not vaccinated. This is great injustice to bring upon anyone during a pandemic. The urgency shown in demolishing the houses of the poor is therefore unjustified.
By Manju Menon and Ishita Chatterjee  |  June 29, 2021

On June 7, Supreme Court reiterated its order of February and April 2020 to evict the Khori Gaon basti on the Delhi-Haryana border, falling within the Faridabad Municipal Corporation (FMC) jurisdiction. The eviction orders are premised on a set of cases heard in the higher courts since 2010.

The Supreme Court concluded that this basti is an encroachment on the Aravalli forest land and so deemed it fit to order the municipal corporation to undertake evictions using force if needed. The residents have been given a few days to collect their belongings and leave before the demolition squad comes to vacate these lands. The demolitions of over 6,500 homes are scheduled to take place just when the monsoon arrives and we are still in a pandemic where most of the population is not vaccinated. Haryana is under partial lockdown till June 21.

The residents of Khori Gaon are the working class of NCR. They perform a range of services that keep it moving. The early residents were quarry workers who got stuck in a vicious cycle of debt to the quarry contractors. Over the years, urban poor who have been displaced from various bastis in Delhi to make way for urban development projects have also settled here. A large group also comprises low-income families who have migrated from the neighbouring states in search of jobs.

While the land of Khori Gaon officially belongs to the government, these residents have been sold little parcels of land by dubious land dealers through power of attorney documents. The houses they have built are their entire life’s savings. Over the years they have spent their meagre resources to obtain water and electricity services. Among those to be displaced are more than 5,000 pregnant and lactating women and over 20,000 minors.

The first houses in Khori Gaon came up during the mining operations in the Aravallis. Between the 1990s and 2009, the Supreme court banned mining in the Aravallis and gave the Aravallis an additional layer of legal protection through a series of orders.  Due to these orders, lands regulated under the Punjab Land Preservation Act, 1900 (PLPA) are to be treated as forest land irrespective of ownership. Clauses of the Indian Forest Act are applicable on these lands and no construction can be done without permissions under the Forest Conservation Act.

On the ground, matters are quite different. The state failures in regulating land use on PLPA areas are self-evident. In a June 2020 report submitted by the Haryana Forest Department to the National Green Tribunal in the long running case, numerous cases of construction violations on PLPA lands have been identified. In Faridabad alone, there are 123. Although the Forest Department claims to have issued notices from time to time to select developments in this list, it has had little success in dealing with forest encroachments overall. This is mainly because most of these violations are on village common lands and many of these have been privatised and now co-owned by several people. The violations may be done by one of the members of the co-ownership.

Managing government land under PLPA restrictions is just as challenging. Although the Development Plans of the Faridabad Municipal Corporation indicates that land use is highly restricted in PLPA areas, several high-end commercial establishments like resort hotels and tourist facilities are in the neighbourhood of Khori Gaon. These buildings are also listed in the forest department’s report to the NGT. But they don’t seem to be threatened with demolition orders. 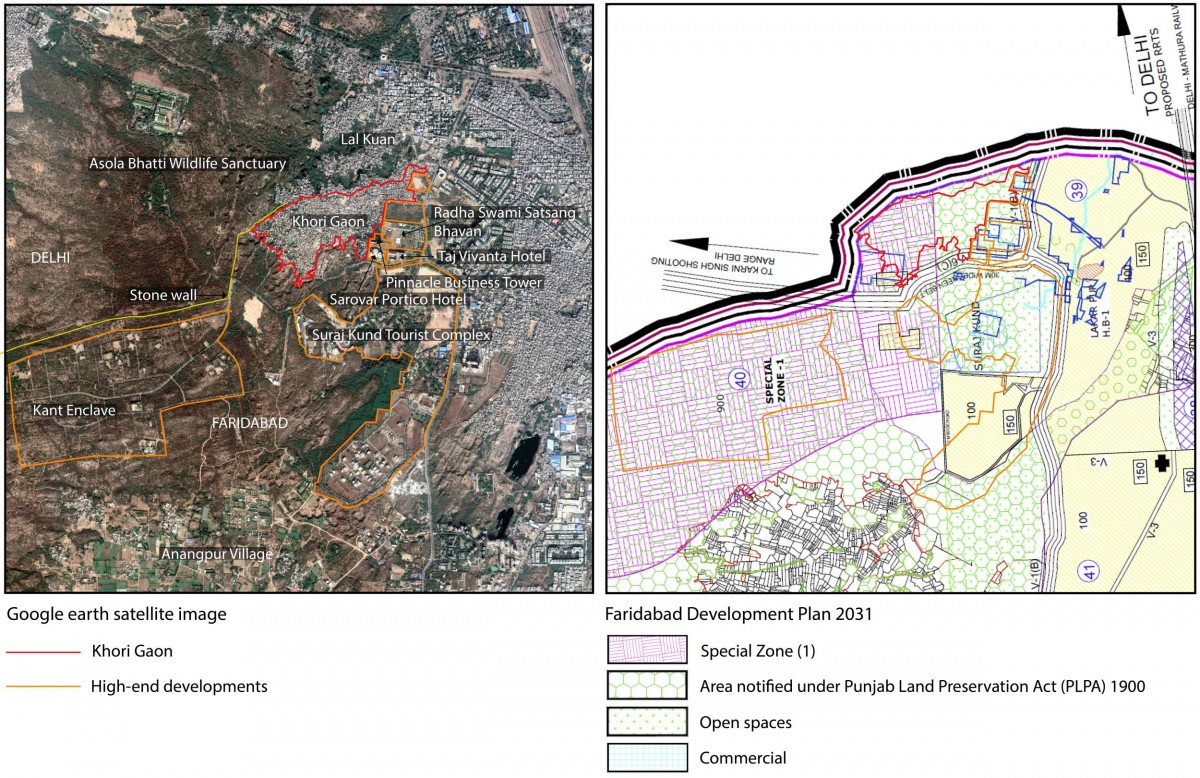 The orders of the higher judiciary have greatly curtailed the Haryana government’s efforts to monetise PLPA lands through mining and real estate. They would like to scrap PLPA and its environmental imperatives altogether. Their problems with PLPA came to a head with the Kant enclave judgment of 2018 where a sprawling property near Khori Gaon was ordered to be demolished because the permissions given to the project were found to be in violation of forest regulations. In this case, the court ordered compensations to those who lost their property. After this judgment, the Khattar government attempted to amend PLPA in favour of opening it up for real estate development. The amendment was stayed by the Supreme Court.

But in the Khori Gaon cases, the government has claimed that this densely packed human settlement on 120 acres is essential for forest conservation in the state. Lt. Col. Sarvadaman Singh Oberoi, who has filed several cases on forest conservation, states that the human cost of reclaiming this forest land will be the highest in the Aravalli. His broad estimates show that this will lead to the displacement of 600 people per acre and the loss of primary residences of poor people.

“There are more than a hundred farmhouses in the Aravalli forest areas running commercial or religious enterprises in villages like Mewla Maharajpur, Ankhir and Anangpur. The human cost per acre of reclaiming aravalli forests in these areas will be negligible. Surely  some prioritisation has to be done for reclaiming forest land in the state?” he asks.

Housing rights and the environment

In mega cities where land prices are kept unaffordable for a majority of city dwellers, bastis should ideally not be upended. Evicting residents during a pandemic and rendering them homeless is a gross human rights violation. Eviction without rehabilitation violates the right to decent housing. In India, activists have done painstaking work to reform legal statutes and democratic politics to address urban evictions as a manifestation of economic and social inequality. Their efforts have been to extend the rights to the city to the urban poor. However, these reforms have not come to bear on cases that involve informal settlements on lands held important for environmental reasons.

These cases are typically polarised as a contest between housing rights and environmental conservation, with the latter being presented as public interest threatened by housing rights of the poor. But conservationists have been demonstrating that environmental protection can be achieved only with socio-economic justice. As the pandemic has revealed in the most traumatic way, public interest lies in finding radical ways to address social, economic and environmental inequality.

There is a housing crisis for the working class in these cities. Khori Gaon is a symptom of this crisis. It is very important that a full plan is created to address this crisis while keeping both objectives of forest conservation and social housing at its centre. Indeed, this is what conservationists and housing rights activists working in mega cities would want to see.

If the government and judiciary is interested in making Khori Gaon available for forest conservation, then it would be very reasonable to offer alternative land to the basti  residents. But for this kind of collaborative approach to materialise, the state government must resist the use of force or coercion. Over the last five days, several vocal residents and activists have been detained, the water and electricity connections to the area have been cut and residents are forced to leave with their belongings. Section 144 has been imposed in the area. This is great injustice to bring upon anyone during a pandemic.

The urgency shown in demolishing the houses of the poor is unjustifiable. As one young woman residing in Khori Gaon asked, will you be able to grow a forest here in a few days or weeks?

(This article originally appeared in The Wire on June 17, 2021. A Hindi version is available here.)

Manju Menon is Senior Fellow at the Centre for Policy Research.

Ishita Chatterjee is an architect and PhD Scholar at the University of Melbourne who has been studying Khori Gaon.