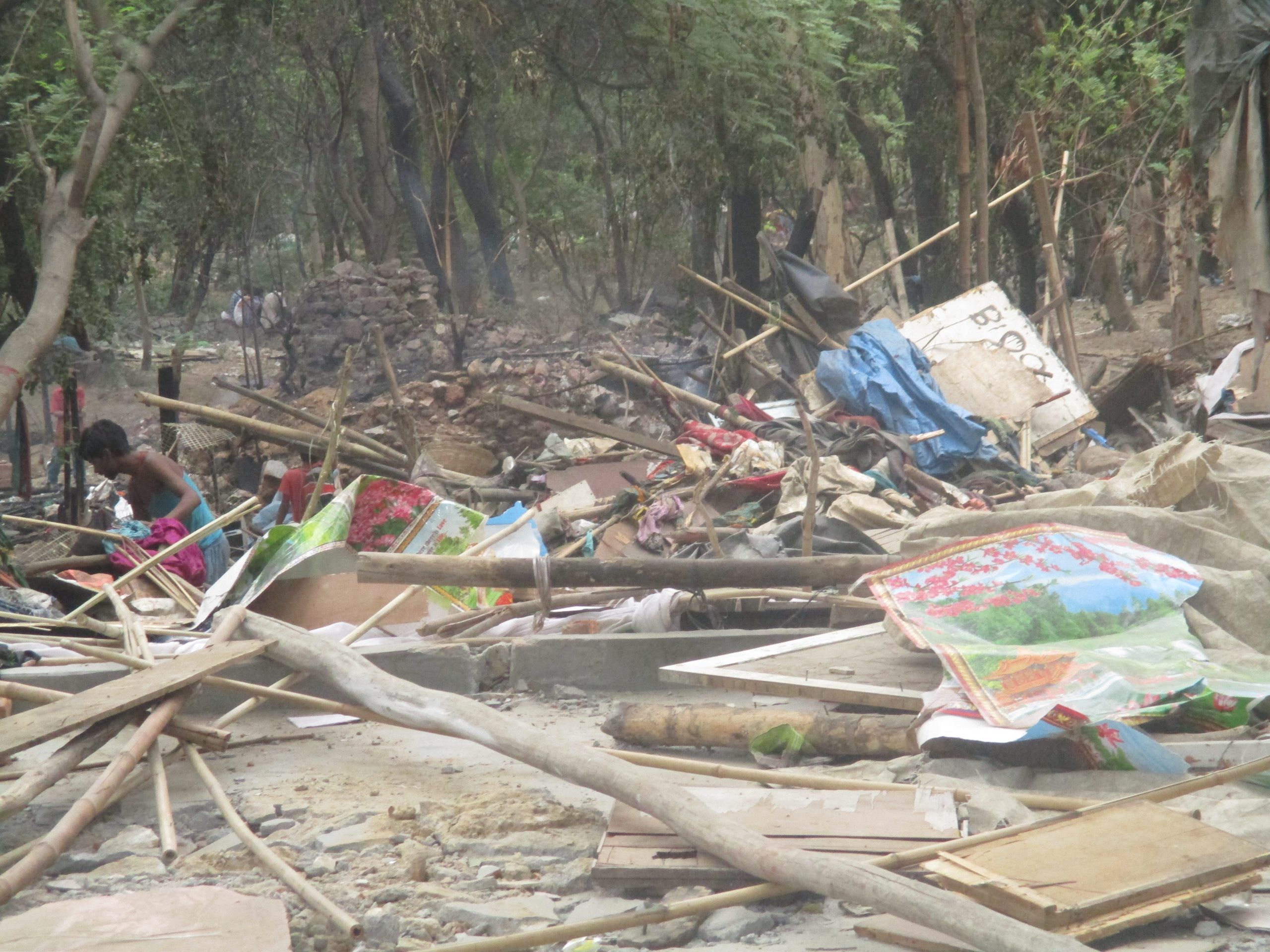 “A potential death sentence”: Impact Assessment of Evictions during the Pandemic in Delhi

The making of the city of Delhi is characterised by perennial eviction at the legal and spatial peripheries of its urban landscape. Disturbingly, this character of regular eviction was not disturbed even during the time of the COVID–19  pandemic, when the world was facing a state of exception.
By IHR Team and Basti Suraksha Manch  |  May 18, 2022

As the capital city, Delhi has particularly pursued goals related to aesthetics and order. A consequence of this has been a continual purging of those residents who are seen to violate these goals, through evictions and housing demolitions. Disturbingly, this cycle of regular eviction and demolition was not broken even during the time of the COVID–19  pandemic, when the world was facing a state of exception. Widespread evictions in Delhi and elsewhere in the country have been reported during both the first wave of COVID-19 in 2020, as well as the second wave in 2021, with at least 245 documented instances between March 2020 and July 2021 resulting in an estimated displacement of more than 2,50,000 people.

How were communities facing evictions during the pandemic specifically affected? Did evictions in this context differ in any way from what has taken place before? We summarise the results of Basti Suraksha Manch’s rapid assessment study of 10 communities in Delhi that were evicted during the first wave of the pandemic in 2020. The data was collected through a survey, administered via a semi-structured open-ended questionnaire through a combination of individual and group discussions with residents of the affected communities described hereinafter. The questions were realigned to respond to sensitivities and realities on ground and surveyors were required to spend time and effort to build connections with community members who were recovering from the trauma of the evictions. The surveyors interacted with more than 10 people at each site and in all more than 100 residents were surveyed across all the settlements.

Spread across Delhi, these settlements ranged in terms of typology, from JJ bastis to unauthorised colonies to agricultural lands. The size of settlements in terms of number of households as well as the land owning agencies also varied considerably. In most cases, the evictions were carried out on only part of the settlement.  Details are provided in Table 1 below: 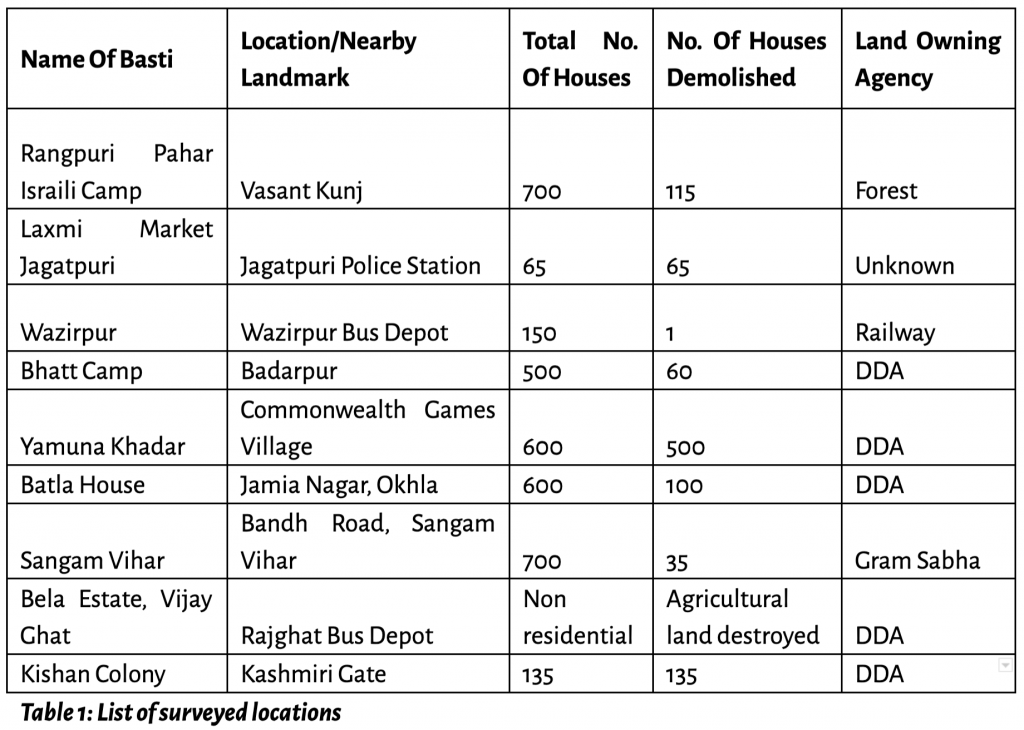 Notably, most of these settlements have been subject to demolition multiple times in the past. A representation has been provided on the image below. 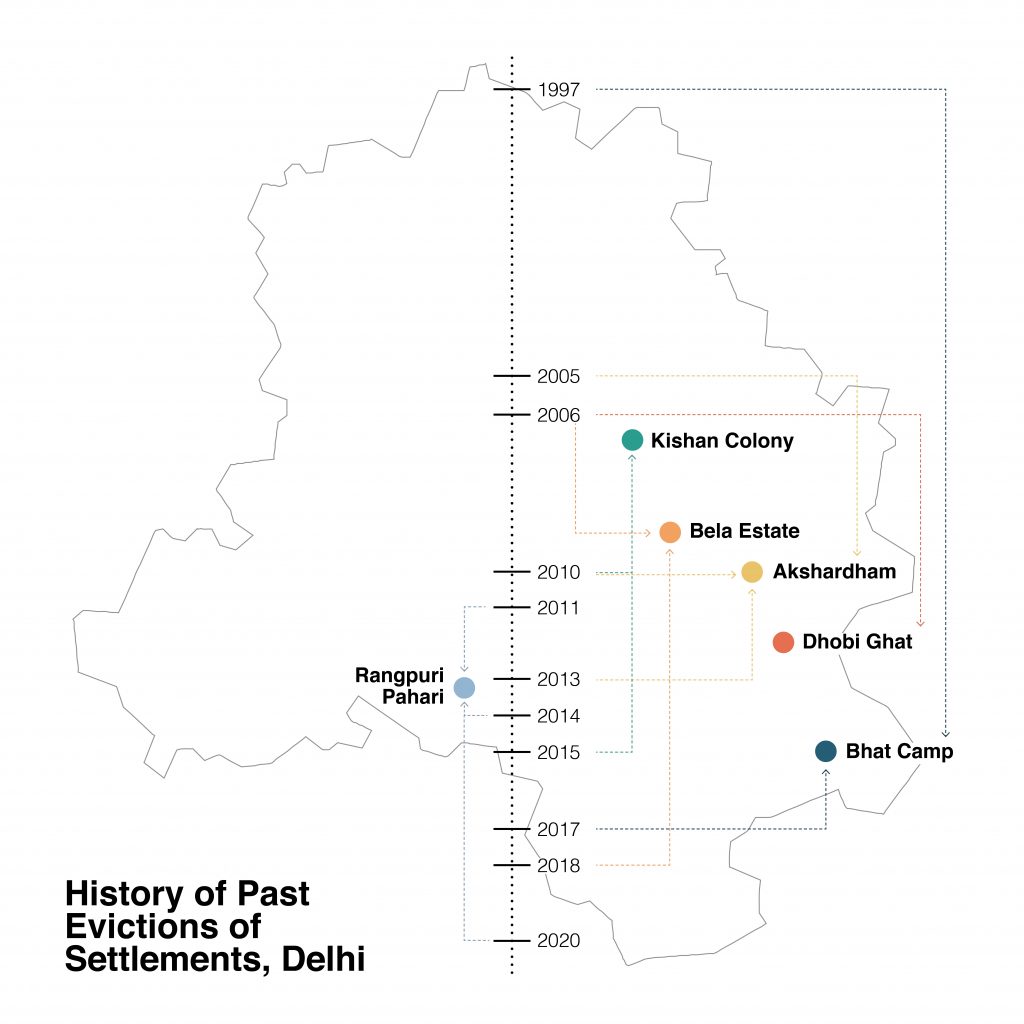 Scale of damage, Absence of due process

Starting March 2020, at the very onset of the pandemic, evictions appear to have continued through the year, across locations regardless of the multiple lockdowns and waves of infections. Though the jurisdiction for slum eviction and rehabilitation in Delhi lies entirely with the Delhi Urban Shelter Improvement Board (DUSIB), the eviction drives were in fact led by various land-owning agencies like DDA, forest department, and the different Municipal Corporations in the city.

Estimates of housing losses are approximated based on figures stated by the residents which varied across the settlements as well as the quality of the built structures demolished, ranging from Rs 50,000 for a hut in Wazirpur to Rs 20 lakh for a pucca house in Jagatpuri. Across all settlements, the total value of the 1000 houses that was demolished was assessed to be about Rs. 28 crore.

In Bela Estate, no houses were demolished but several acres of agricultural lands were laid to waste by the authorities. Mature agricultural products on the field were destroyed by running bulldozers over them, which has also damaged the land and made it impossible to cultivate in near future. Families living in Kishan colony also lost their agricultural land of 6 bighas per head in the same manner.

Regardless of the agency involved, the evictions were characterised by the lack of due process. The survey revealed that in almost all the evictions little or no notice was served to the residents, leaving them unprepared and multiplying their distress and material losses. A few like Rangpuri Pahari and Batla house experienced multiple phases of eviction within the three months during the lockdown.

Unsurprisingly, these evicted communities comprised the working poor of the city, who are engaged in a range of informal occupations and dependent on daily wage earnings. Selling fruits, vegetables, fried food on carts was a dominant source of livelihood among men, while women predominantly engaged in domestic work at nearby colonies. Residents of Bela estate and Kishan Colony were fully dependent on agricultural activity. Among children, almost 90% were school going and 5% were college-going.

These households were not new to the city, nor were they seasonal migrants who lived between their home villages and Delhi. Interactions revealed that these communities had been residents of these bastis for more than a decade. Places like Rangpuri Pahari claimed their existence for more than 25 years. Despite this, only a small number of people possessed voter id cards before 2006 – the cut-off date for bastis to be included in the DUSIB lists. None of these settlements surveyed was on the DUSIB lists, thus making them ineligible for rehabilitation.

Residents’ claims to their sites of residence varied in degree of firmness. Across all settlements, about 50% of the total residents evicted during the pandemic claimed to possess all the necessary documents for rehabilitation as per the 2015 Delhi Slum & JJ Rehabilitation Policy. In the case of the agricultural communities in Yamuna Khadar and Bela Estate, residents possessed receipts of taxes paid to the local co-operative society in 1945-49.  Other residents had relatively weak claims and were also too impoverished to have any other recourse to shelter. In the case of Batla house, for instance, most of those evicted were newly settled people, who continued to live under temporarily constructed tarpaulins on site in the absence of any other option for shelter, even after the demolitions were carried out.

The impact of these demolitions was particularly harsh on basti residents, who were already facing losses of livelihood on account of pandemic-induced restrictions and lockdowns. The survey documents a large number of schoolgoing children in these bastis. This offers a sense of how far-reaching the impacts of hunger and inadequate nutrition were for these families, struggling to survive multiple calamities.  Almost all settlements had to rely on food rations provided in a few cases by the Government and in most cases by NGOs. A summary statement of the impact is given below in Table 2: 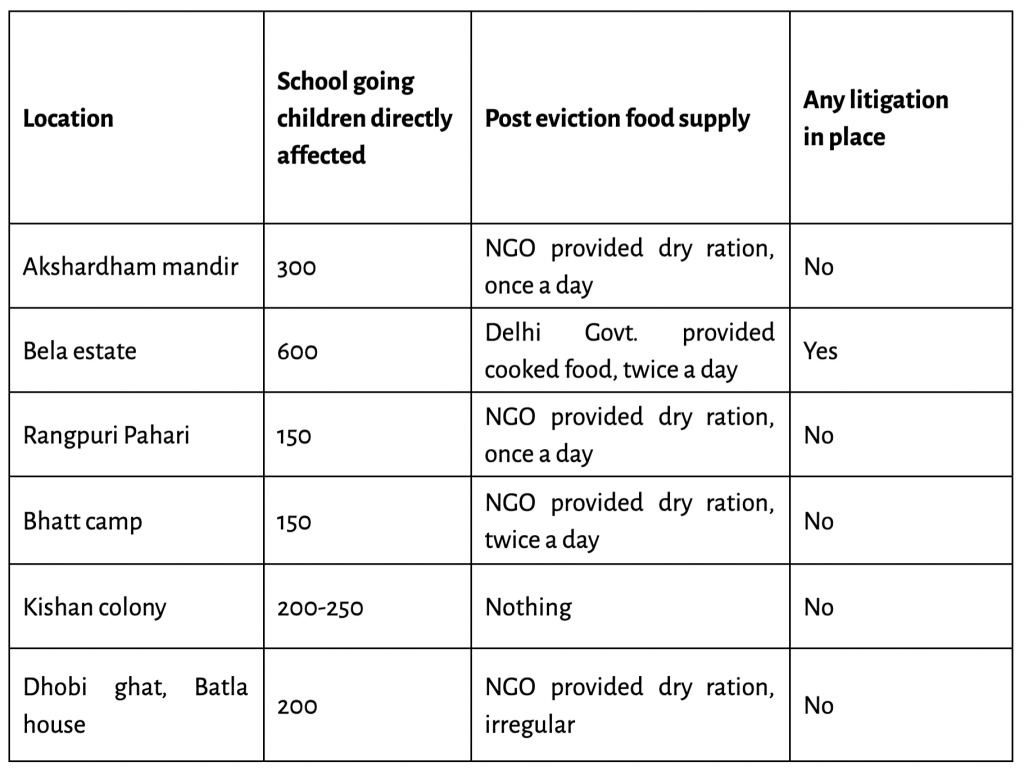 While the survival challenges were great, the most dire consequence of the pandemic for these communities was the stymying of legal recourse. Admittedly due process for evictions was not necessarily better followed pre-pandemic. However, residents’  access to remedies were severely restricted on account of pandemic-related movement restrictions, and the closure of courts and government offices. Additionally, several avenues like writing letters to authorities or taking legal recourse were not available at this time. Consequently, in most cases, the residents were unable to obtain any relief from the courts and were immediately rendered homeless. Moreover, the residents reported that on account of pandemic related restrictions, they also received little or no help from individuals or organizations that had been able to mobilise support to assist them in the past.

The UN Special Rapporteur on the Right to Adequate Housing, in a guidance note issued to the governments of all countries in April 2020, made the following observations in the context of the COVID – 19 pandemic:

Evictions are not only inconsistent with the ‘stay home’ policy but forced evictions are a violation of international human rights law, including the right to housing, as are any evictions that result in homelessness. In the face of this pandemic, being evicted from your home is a potential death sentence.

The unprecedented disruption caused by the pandemic placed a greater responsibility on state authorities to extend support to already vulnerable communities. Instead, this study documents how a number of communities living in informal settlements in Delhi were subject to eviction, with due process requirements violated and little opportunity available for remedy. This represents a failure of state institutions to show humanitarian benevolence to the most marginalised. The significant poverty shock due to the economic damage caused by the loss of houses and displacement, in addition to the economic impacts of the pandemic itself, is likely to linger. A strategy to ‘build back better’ after the pandemic must pay attention to displaced communities, who are long-time residents and the working poor of our cities. Only then can we truly claim to have left no one behind.