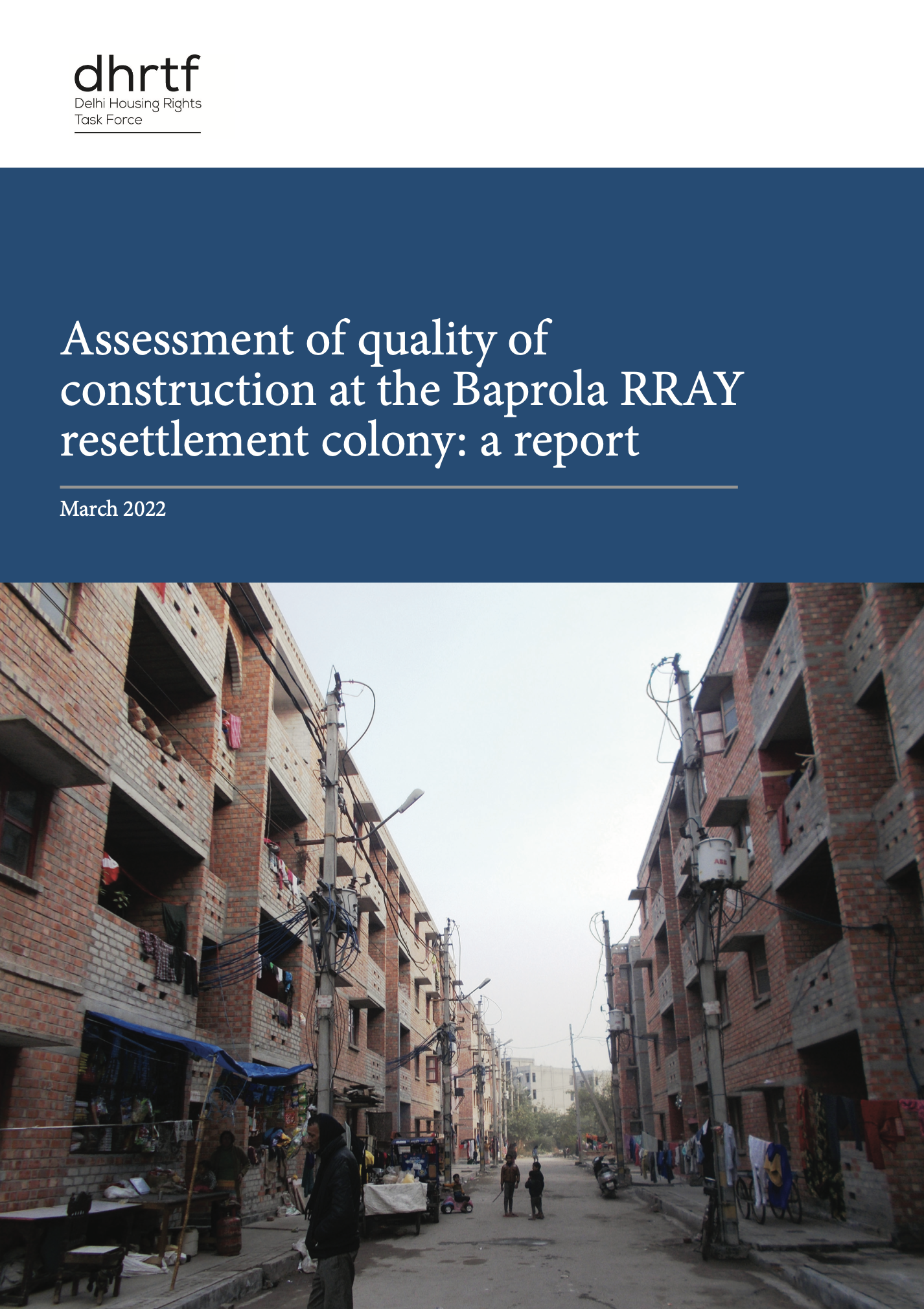 Assessment of quality of construction at the Baprola RRAY resettlement colony: A Report

In keeping with its mandate to improve the quality of life of residents of JJ clusters, DUSIB constructed an Economically Weaker Section (EWS) Housing Society in Baprola Phase 2, approximately 25km from central Delhi. However, in less than five years from completion and relocation of allottees, issues of seepage, cracks in walls, peeling of bricks, overflowing drains have been reported by residents, including to DUSIB. The emergence and wide prevalence of these issues in such a short duration necessitated the need for a comprehensive assessment of the design, construction quality, and grievance redressal mechanism in this context.
By DHRTF Team  |  May 12, 2022
Download

In keeping with its mandate to improve the quality of life of residents of JJ clusters, DUSIB constructed an Economically Weaker Section (EWS) Housing Society in Baprola Phase 2, approximately 25km from central Delhi. The project was planned and executed under Rajiv Ratan Awas Yojana (RRAY) Guidelines. It was sanctioned in 2008 and completed in 2014 with 2000 DUs: the first batch of allottees were relocated over 2014–15. These residents were from settlements located 10-15 kms from Baprola, such as Punjabi Bagh and Jwalapuri.

This report presents a preliminary evaluation of the issues at hand. A total number of 110 respondents from Blocks F, G, J, and K were surveyed to determine the nature and extent of the problems and understand measures taken by DUSIB to resolve the same. As many as 64% of all respondents reported structural issues, out of which 83% consisted of moisture in toilets and 73% of brick peeling. While residents on lower floors reported greater incidence of structural issues, those on upper floors faced acute problems in accessing potable water as it had to be carted manually from DJB tankers. Given the high prevalence of these problems, 41% of the surveyed households reported having carried out repairs in their homes. DUSIB’s response to these issues was generally apathetic, with less than 10% of all complaints resolved according to respondents.

Initial assessments suggest two kinds of lapses in the project, which can only be confirmed further by an in-depth evaluation, conducted by or with cooperation from DUSIB. The first major issue lies in the quality of the material used for construction of the buildings, which has resulted in the widespread issues facing the communities today. Secondly, there are minor structural issues with the buildings themselves, despite the design of the project being in line with industry standards.

This report documents how these lapses have detrimentally affected living conditions in the Society and put families at risk in case of collapse and deteriorating conditions. Consequently, a publicly funded project meant to improve allottees’ quality of life by providing them affordable and liveable housing has, instead, pushed them into deeper financial and emotional vulnerability. In light of these findings, the report concludes by suggesting measures to ameliorate the living conditions of residents and set a benchmark for all such resettlement and/or rehabilitation projects in the future.

The Delhi Housing Rights Task Force (DHRTF) is a collective of individuals and organisations working to protect and promote the human right to adequate housing, with a focus on Delhi. Formally established in 2015, DHRTF works to minimize forced evictions, improve public housing delivery, and promote greater discussion and interactions on housing rights through collective work, collaboration, and sharing of resources and knowledge among its members.