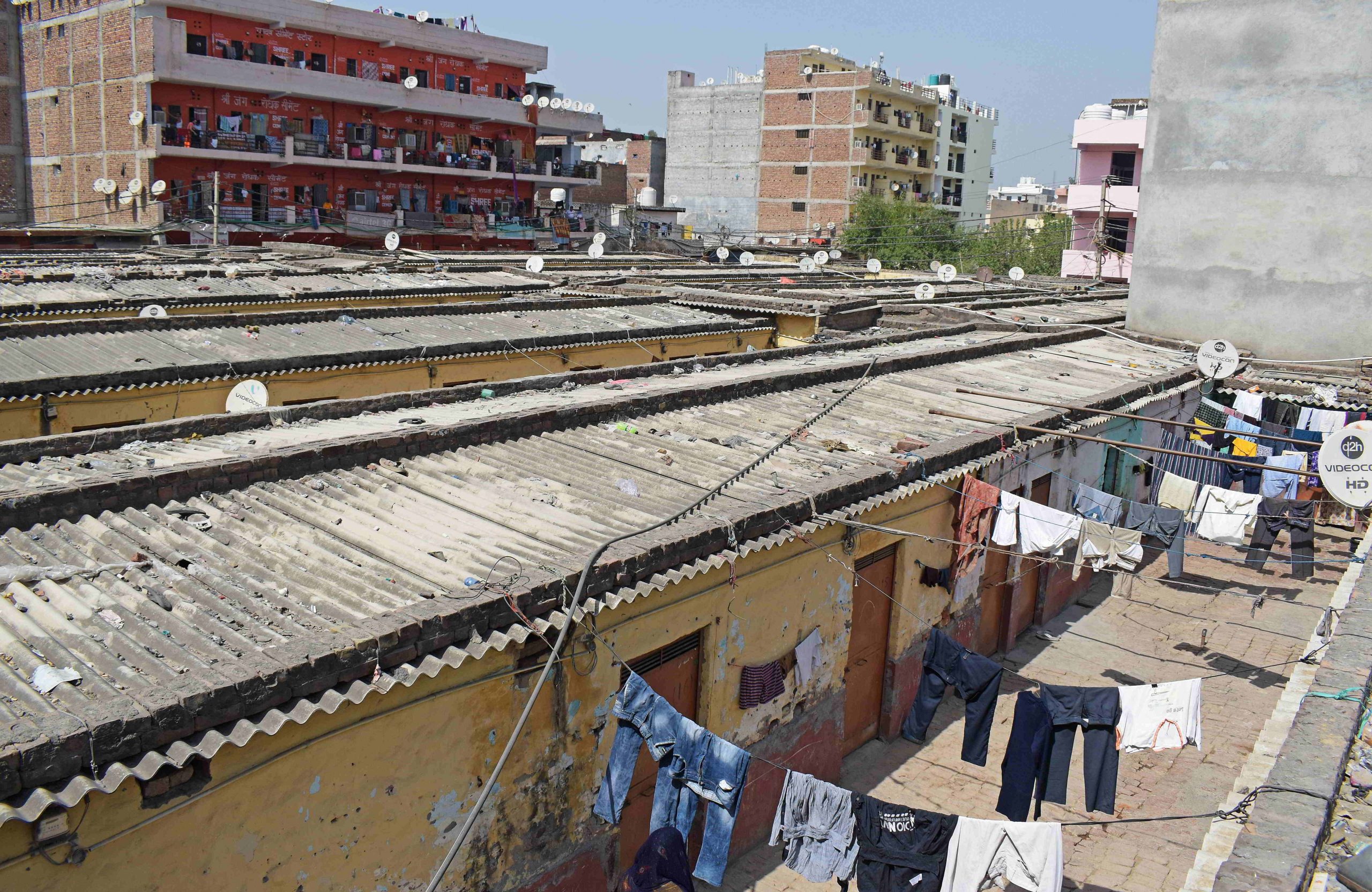 While the power of asset-owning landlords in rural India is well-understood, less attention has been paid to the same in urban areas. Examining Kapashera, a low-middle income settlement in Delhi, this article outlines the housing typologies and dynamism in landlord-tenant relations that relegated working class migrants to exploitative housing experiences.
By Richa Sekhani and Advaita Singh  |  July 6, 2021

Land ownership has been an integral source of power and prosperity throughout history. Since the old days of Zameendari, an asset-owning class of landlords (zameendars) across India have exerted dominion over destitute, landless peasants. Complete control over property provided landlords with unfair power and authority, leaving the renters vulnerable to their exploitation. To ensure fair behavior and protect tenants, the Delhi Rent Control Act, 1958 was passed. Since then, peasant tenants were legally empowered to seek the essential services they deserve. However, in many countries, the same privileges have not extended into the urban, low-income settlements.  While inequality in land ownership has declined over time in India — with only 7.41% of households classified as landless — the power structure between landlords and tenants has endured.

Though landlords, and those belonging to the main asset owing class, have always been powerful, the modern topological complex — with industrial areas and employment epicenters — has added complicated layers in the power dynamics of the asset-owning class. As migrant workers gravitate towards industrial hubs amidst the widespread lacuna in employment opportunities, the demand for housing has massively increased. This surge in demand has made it rewarding to own properties in metropolitan cities as compared to rural areas, rendering urban landlords powerful, modern-day zamindars.

As rents in cities skyrocket and the need for proper housing remains unmet, low-income families often resort to living in squatter settlements and slums. Amidst this urban housing crisis — with families struggling to find affordable housing and claim their basic rights as tenants — Delhi’s Kapashera had emerged as an ecosystem of support that amplifies co-existence and affordability.

Located about a mile northeast of the Delhi-Gurgaon border, Kapashera is a slum-like settlement in Delhi that is home to migrant workers from Bihar and other northern states. From being an agrarian village, Kapashera has transformed into a dense settlement full of tenements because of ‘formal’ industrial areas and gated communities that have emerged in the post-1990s period. The dense colonies are not only home to people but also a colourful arrangement of stories, culture and tradition. The variation in the population, presence of various housing structures and lack of basic amenities, distinguishes  Kapashera from other informal settlements and slums in India.

Given the close proximity to Udyog Vihar in Gurgaon, most of the migrant workers are primarily employed in the industrial sector with the textile export industry or in the IT companies providing their services as drivers and guards. Some of them are daily wage workers engaged in construction, masonry, painting, tile and marble work, etc. The earnings are low and the nature of the employment is largely informal. Over the years, particularly in the garment industry, the real wages of the workers have witnessed a decline as a result of the inflationary spiral. We also find some of the migrant workers owning general stories and rented shops of rations, dairy products, shoes to cater to the needs of the local population.

Housing and rent in Kapashera

Kapashera is also an affordable living hub for the low-earning migrant workers, who wish to reside close to their workplaces. Unlike the various slums in India, including Dharavi, which mainly consist of jhuggis, the settlement exhibits various housing patterns. A recent research report brought out by Center for New Economic Studies on The Lives and Livelihood in Kapashera, based on extensive fieldwork in Kapashera, found various housing patterns in the settlement. Since Kapashera is arranged in lanes, the rent of the house varies based on location. There appears a spatial pattern to the type of structure and quality of housing, which also related to location. These typologies and the links with location, housing quality and type tenants and landlords, are summarised below:

Occupied mostly by waste-pickers, these dwellings are made of temporary materials like mud and corrugated iron sheets. Landlords are absent and no rent is usually charged.

Located in the intermediate zone at the heart of Kapashera village, these structures are semi-permanent in nature, with brick walls and tin or asbestos-cement roofing. They are inhabited mostly by fruits and vegetable vendors, cleaners, rickshaw pullers, etc. Most of the landlords stay in Palam Vihar, a planned colony near the village. Often, a contractor is nominated by the landlord who collects rent to the tune of Rs 1500-3000 from the tenants.

In lane numbers 4-8 behind a well-known management institution, where the high-tension wires criss-cross overhead, a more permanent set of multi-storey structures house workers engaged in informal and semi-formal work, including drivers, security guards, construction workers and factory workers. Families or a group of individuals share the cramped rooms, and about 8-10 rooms share a toilet. Similar to the above category, they pay rents in the range of Rs 1500-3000 to landlords who live in formal settlements nearby Kapashera.

Also located in the ‘high tension’ area of the village in lanes 1-3 and with a similar tenant and landlord profile as the category above, these rooms are more expensive as only 5-6 families share toilets and baths. The bathing area is often open and the rooms are poorly ventilated.

Catering to migrants with higher job security who have been staying in Kapashera for longer, these housing units are relatively self-sufficient in terms of services, with attached toilets and baths and improved ventilation. Accordingly, the rent is higher: Rs 4,500 for 1 bedroom-hall-kitchen (BHK), Rs 7,000 for 2BHK and Rs 8,000-10,000 for 3BHK accommodation. Landlords often stay near or within the premises. This kind of housing is located at the periphery of the village in what is popularly called the Extension-wali Gali. The term extension derives from the phenomenon of urban villages spilling out of the prescribed ‘lal dora’ area that was demarcated in the land records as the inhabitation area, outside which the village commons and the agricultural lands once existed.

Like in other urban villages and informal settlements, rental agreements between the landlords and the tenants are either oral or written on paper, having no legal validity. Rental payments are mostly made in cash without being provided with any receipt to act as proof. The absence of contracts and legal formalities leaves tenants vulnerable to exploitation that is inherent to the power structure between landlord and tenant.

For instance, landlords and some of the property managers often own shops of ration or water in the neighbourhood. Being local businessmen, they want to increase their sales, which they often accomplish by pressurizing their tenants to buy solely from their shops. Given the absence of enforceable contracts, tenants are forced to oblige at the risk of being evicted. “In absence of contracts, there have been several anecdotes of tenants being asked to vacate their room on short notice by landlords on account of tenants not maintaining the property or not buying grocery from the shops owned by the landlords”, explained a member of local NGO- Ideal youth for Revolutionary Changes (IYRC). This bestows de-facto monopoly status to each shopkeeper in their local area and gives room for abuse of market power.

Drinking water is used as a rent-seeking source. While untreated water is supplied to households throughout the day, the treated water (used for cooking and drinking) is supplied for a certain period of time. Only one bucket of drinking water is provided per room for free. The additional consumption of water is managed through the water jars distributed locally (costing Rs 10-20 each). These are available for purchase near the premises in shops often owned by landlords or property managers. Drinking water is a form of autonomous consumption that results in the minimum monthly expenditure being approximately Rs 450–500 per month.

The drainage system in Kapashera is also used as a source of revenue collection by the landlords. The wastewater goes through ‘nalas’ (sewage canals) and continues flowing within the lanes, posing to be a major health hazard. Most of the time the drainage lines carrying this water get choked up. The presence of only one municipal vehicle responsible for sanitation is not enough to rectify the problem. It is not uncommon for landlords to demand payments (of around Rs 20 per house) from the residents to get the choked drains cleaned.

For the tenants staying in lanes 1–8, most of the landlords stay either in Palam Vihar, a formal housing colony nearby, or in the Extension-wali Gali. They appoint thekedars or contractors who act as property managers or middlemen between the landlord and tenants. Under the Model Tenancy Act of 2021, the Property Manager refers to a “person or company who is authorized by the landowner to manage the premises and who represents the landowner in his dealings with the tenant”.  In return, the property managers are released from either paying rent for the room or from other charges including electricity, water etc.

The presence of a middle man, like in many other sectors including agriculture, health etc., has also presented cases of exploitations in Kapashera. Thekedars hike up electricity bills and water bills to scam their tenants into paying more than they need to while pocketing the difference. As a result, households spend Rs 1200 every month on average on electricity and gas. Furthermore, as representatives of the landowners, property managers are required to carry out certain activities, which they fail at. For instance, they do not fix local issues with the buildings in time or refuse to cooperate during police verification processes without bribes.

The corrupt and unethical behaviour of the thekedars has fostered major trust issues in the tenants. In such cases, the absence of landlords makes the situation worse for the tenants. On the other hand, in the extension-wali-gali that provides 1-BHK, 2-BHK and 3-BHK apartments, the presence of the landlord benefits tenants by offering them quick repair services and assistance in police verifications for legal rental contracts between landlords and the tenants.

Abuse of power by landlords in low-income settlements has exposed the more subtle impacts of the urban housing crisis, especially in large low-middle income settlements like Kapashera. The mismatch observed between the need for proper housing and its availability has resulted in the deplorable conditions of thousands of (migrant) families, and the lack of basic tenant rights for others. With a growing population and increasing rural-to-urban migration, there is a strong case for urgent government investment in proper housing. Since choices empower consumers, without an increase in housing options, the power of landlords in Kapashera will remain unchecked and boundless. It is the tenants who will suffer the brunt of it.

(The authors would like to especially thank Ms. Swati from IYRC, an NGO based in Kapashera for the invaluable conversations that assisted in the research for this article. This article is drawn out of  research undertaken during a field study in January and February 2021 which involved a household survey of migrant workers and their families living in different areas within Kapashera.)

Richa Sekhani is a Research Associate at ICRIER and a Senior Research Analyst with the Centre for New Economics Studies, Jindal School of Liberal Arts and Humanities, O.P. Jindal Global University.

The manager have a shop but nowadays tenant can’t be forced to buy goods from manager shop
Due to shop manager is mostly available in building or plot.