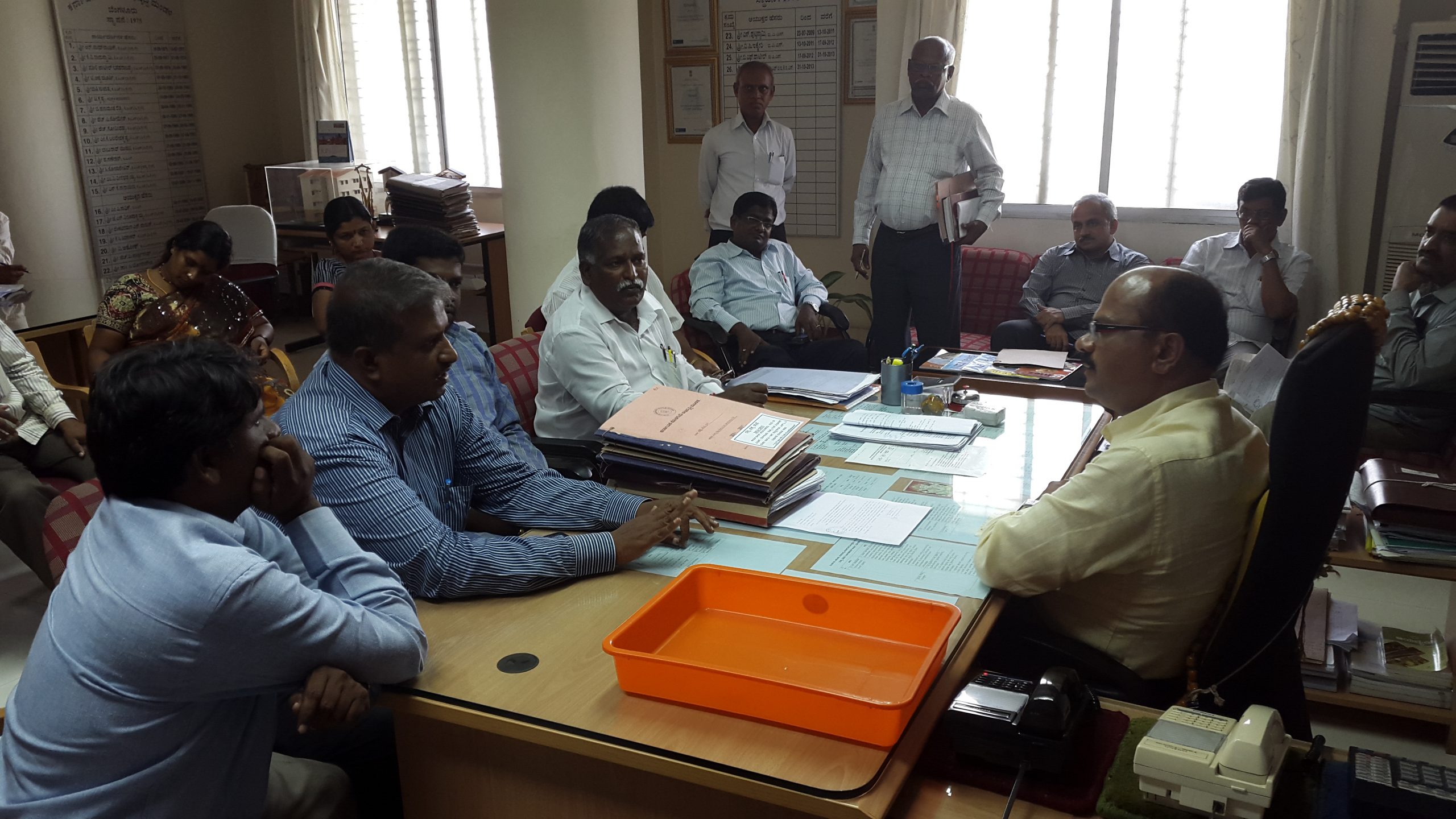 Why are the struggles of India’s urban poor fragmented?

India witnesses a massive crisis in housing with 95.62% (2012) of this shortfall felt by economically weaker sections and low income groups. Yet we do not see these groups mobilising together to force the government to respond to their needs. In cities such as Mumbai where the majority of the population lives in poor housing, we still do not see a mass mobilisation or social movement to push the government into action. Why don’t the urban poor come together when social movements have proved effective in enabling change in policies? This piece answers this question, drawing from a longitudinal ethnography of struggles for rehabilitation housing in Bangalore.
By Kaveri Thara  |  July 13, 2021

Sociologists and anthropologists have examined struggles of the landless poor. A good part of this concerns the urban poor, perhaps because the dearth of housing is most acute in urban areas. This vibrant and rich research has detailed how the poor survive on land they do not own, and over time gain security of tenure, construct their own housing and economic enterprises, claim citizenship rights, access services and gather political support to ensure they are not evicted. A good part of this work details the struggles and mobilisations of the urban poor, often drawing on specific cases of slum dwellers and we rarely find struggles that go beyond the confines of a particular settlement. This article unpacks the phenomenon of fragmented urban poor struggles drawing from a longitudinal ethnography of a network of urban poor organisations in Karnataka, which was founded to build solidarity amongst poor groups.

Urban poor struggles have a long history in Karnataka, with deep roots in a vibrant and dynamic Dalit movement. This piece examines a part of this struggle, focusing on the Slum Janandolana, a network of urban poor organisations founded in 1988 by Y.J. Rajendra, a faculty of St. Joseph’s College Bangalore in partnership with JanaSahayog, an NGO working on urban poor issues in Bangalore. The Slum Janandolana network was constructed as an alternative to ‘machine politics’, or what is commonly referred to as vote bank politics in the Indian context, as it ensured the dependence of the poor on political representatives who exploited vote banks and did little to benefit the poor. The objective was to create a network of urban poor organisations that would be located outside the space of the NGO in which organisations could support each other and form a unified front, to negotiate with the state. The network brought together existing urban poor organisations, many of them Dalit organisations, and encouraged Dalit youth to form new organisations that were initially funded by the JanaSahayog. This piece examines one such, the ‘Slum Janara Kriya Vedike’ (SJKV), which works with urban poor groups in Bangalore and also has a Dalit identity calling itself the ‘Dalit Samara Sene’.

The SJKV like many other organisations in the Slum Janandolana network works primarily on issues of urban poor housing, representing groups settled in slums and settlements before the state and negotiating on their behalf. Shankar, the founder of SJKV is a resident of the ‘Laggere slum board quarters’ (located in north-west Bangalore), having been moved here in 1983 from a slum along the railway tracks near the Kadapa Matha, on Magadi Road. He was recruited as a youth mobiliser and provided a small stipend of ₹2000 by JanaSahayog in 2004 for mobilising youth in slums, later went on to start SJKV and was provided a fellowship of ₹10,000 till 2011. In an interview with a reputed lawyer who provides legal aid to poor groups, he spoke of how the larger umbrella of Slum Janandolana never really materialised as organisations such as the SJKV continued to retain their independence, while benefitting from the network. This was in large motivated by the manner in which the state engages with urban poor organisations.

The slum survey – between the state and the urban poor

As Ghertner details in his work on slum enumerations, the state’s engagement with urban poor groups transformed over time. While the state initially carried out slum surveys through its officers, this activity was soon taken over by urban poor groups themselves as surveys conducted by officers were frequently shown to be erroneous and slum groups were better informed and thus in a better position to provide accurate information. Slum surveys are normally carried out for different reasons – for the purpose of declaring a slum under local slum laws (which entitle it to access basic services from the state), and at the time of eviction, in order to assess the number of people entitled to rehabilitation housing. In Bangalore, organisations within Slum Janandolana such as the SJKV came to occupy the space between urban poor groups and the state, inculcating pedagogies of self-enumeration (self-survey) amongst the urban poor and representing groups seeking slum declarations or those threatened with eviction. Youth based organisations such as the SJKV that were initially small and financially supported by JanaSahayog, soon grew to become bigger organisations catering to many groups (over 200 as of 2010), with earlier modes of volunteering soon replaced by members who began to demand remuneration for their work. 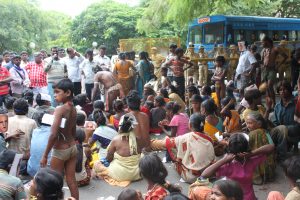 This was accompanied by a crisis of affordable housing that continued to grow, as the state of Karnataka distributed land and housing inequitably allocating more land and housing to wealthier groups. The meagre housing provided for low income and economically weaker sections by states and under central government schemes (such as the JNNURM and RAY) were used by the state governments to vacate slums and settlements in the city. Groups such as the SJKV that were meant to resist evictions, over time themselves became enticed by this offer of legal housing. Members of these organisations who were themselves residents of slums, were co-opted by the state, and began to facilitate rather than resist evictions. The slum survey as a document enabled this co-optation, as both state officials and organisations such as the SJKV used self-enumeration to their advantage, adding beneficiaries to the list. Slum officials added names of people who bribed them to the allotment list, while members of the SJKV added their own names, or names of relatives or friends, or those who paid for these homes. Subsidised homes that measure between 250-300 square feet were being sold in the informal/unofficial/illegal market for ₹2,50,000–3,00,000 (during 2012-2015). JanaSahayog objected to these dealings leading to Shankar leaving the organisation in 2011. In an interview he explained that he could not ignore the demands of members who were themselves from slums and were justified in demanding compensation for the time and efforts they contributed to SJKV’s work.

Is this co-optation and corruption new?

It is not as if this corruption did not exist prior to the Slum Janandolana, slum leaders have always engaged in corruption with the support of corrupt officials. The local slum board has always been well known for its rampant corruption and the ‘quotas’ of certain officials within the slum board and the prices at which they sold these low cost homes, were openly discussed in Laggere where I conducted my ethnographic research. But the nature of such corruption that took place between the representative of a slum and local officials was different, in that it personally implicated the slum representative or ‘slum leader’ as they are called, with leaders often denounced and dethroned by the groups they represent. What is different about organisations in Slum Janandolana such as the SJKV is the fact that they were conceived as an alternative that would unify the urban poor and use the resources of a state wide network of slum organisations to force the state to respond to the demands of the urban poor. 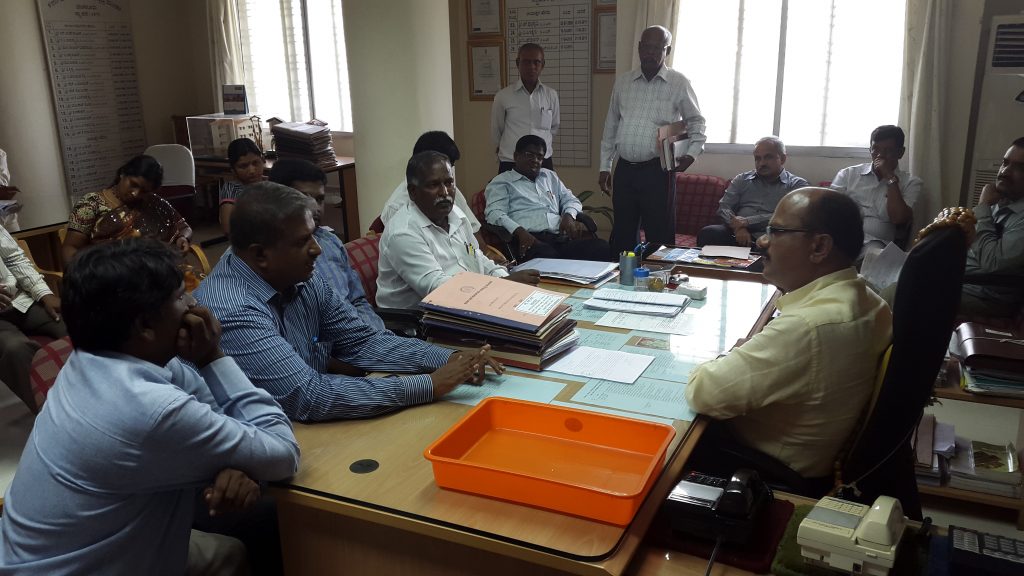 SJKV negotiating with officers of the Slum Board. (Source: SJKV)

These organisations that now constitute a network are far more powerful than slum leaders as they represent many slums and settlements. Each organisation functions independently, guarding its constituency of poor groups and using the network in situations of crisis. Organisations also vary in terms of their exploitation of poor groups, with some extracting money for their services, while others like SJKV make their gains primarily by bloating allotment lists. Due to their long work with state institutions (slum boards and municipalities), these organisations have come to occupy a space between the state and the urban poor, much like the elected representatives they were meant to challenge. Reddy and Haragopal in their study of mediators detail four types of mediators/middlemen or as they call them ‘fixers’: the karnams/patels who hold semi-official positions as village officers; politician pyraveekars who are aligned with political parties; pyraveekars who are employed by the state and are official functionaries (government teachers, officers of various sorts within state departments); and pyraveekars who take to mediation as a profession and are not aligned either to the state or any political party.  SJKV thus belongs to this fourth category, functioning like professionals for a fee.

Compromising with the state- enabling evictions

This form of mediation substantially compromises the interests of urban poor groups. As the lawyer who provided his services to the SJKV in the past narrated, slums or settlements which had a strong legal case and could have legally resisted eviction, were frequently convinced by the SJKV to vacate and accept rehabilitation housing on the margins of the city. Organisations within the network thus came to play dual roles, representing the urban poor but also representing the state, by enabling evictions that benefit both state officials and the SJKV. The state’s offer of scarce affordable housing thus played a role in fragmenting the poor, with poor groups divided in terms of which mediator they choose to represent them. With state officers dealing through mediators and treating groups on a case by case basis, groups are locked in a logic of access to subsidised housing, thus rendering cross solidarities between urban poor groups impossible. What we see instead is that the poor are through these mediators recruited into the state’s vision of ‘legal housing’, thus resulting in cities being emptied of the urban poor who leave behind prime spots within the city to settle for poorly built and serviced housing in the peripheries, where legality and home ownership remain elusive.

Despite the creation of the Slum Janandolana network as a forum to unify the urban poor, the ‘everyday state’ in India characterised by localised and flexible governance, combined with the crisis in affordable housing and the offer of subsidised housing by the state, resulted in the co-optation of organisations in the network. The corruption in rehabilitation housing that has spawned an informal market in rehabilitation housing, does little to address the crisis in affordable housing, instead supplying cheap housing to those who can afford to purchase these homes from state officials or members of these organisations. The urban poor thus compete with these groups for the scarce housing made available to them, clamouring for the support of organisations such as the SJKV to help them find a home. This example of the Slum Janandolana network, reveals how despite the objective of creating a mass movement, the provision of scarce affordable housing and the tactics of state officials who engage the poor in a patron-client mode through mediators who have been co-opted, fragments the poor and enables the maintenance of status quo in power relations between the state and the urban poor. This leaves the urban poor trapped in a politics of contextually negotiated housing, with no recourse to a radical resistance of or challenge to the state.

(This piece draws from a longitudinal ethnography of struggles for rehabilitation housing in Bangalore, published in 2021 by the Cambridge University Press as a monograph titled ‘In Search of Home: Citizenship, Law and the Politics of the Poor’.)