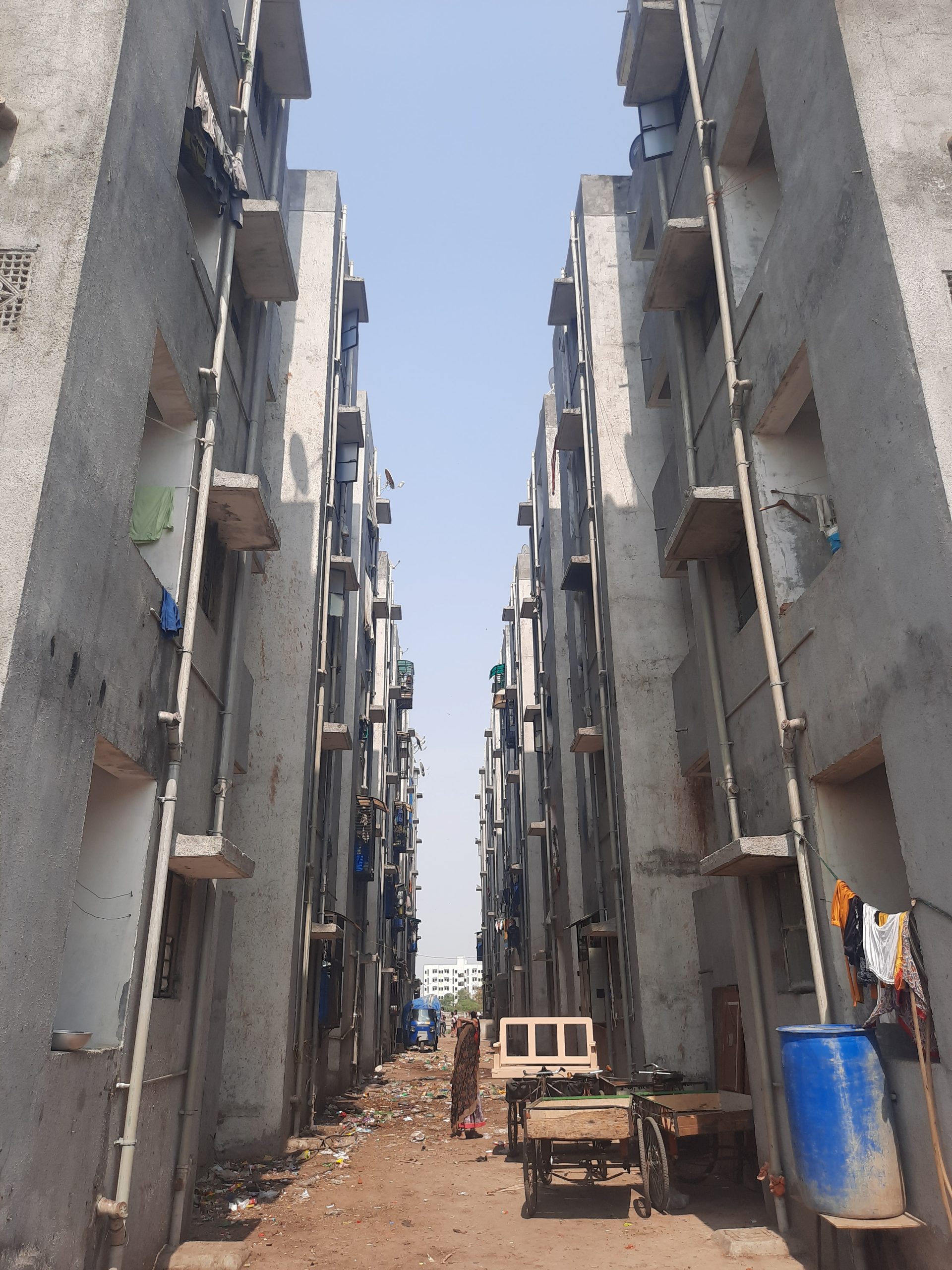 As a response to the COVID-19 migrant crisis and in furtherance of the Government of India’s ‘Atma Nirbhar Bharat’ mission, the Ministry of Housing and Urban Affairs announced the Affordable Rental Housing Complexes (ARHC) programme under the Pradhan Mantri Awas Yojana scheme to improve the living conditions of urban poor/migrant workers. Although the initiative is a novel step, it operational aspects demand more than what is being offered for enabling private/public agencies to leverage the opportunity and turn it into a grand scale programmatic intervention.
By Saurabh Bhatia  |  September 7, 2021

As a response to the COVID-19 migrant crisis and in furtherance of the Government of India’s ‘Atma Nirbhar Bharat’ mission, the Ministry of Housing and Urban Affairs (MoHUA) announced the Affordable Rental Housing Complexes (ARHC) programme under the Pradhan Mantri Awas Yojana (PMAY) scheme to improve the living conditions of urban poor/migrant workers. Operational guidelines for ARHC, issued in July 2020, refer to two models (“Model-1” and “Model-2”) for engaging with public/private sector organisations to develop and operate habitable living spaces on rental basis for urban poor/migrant workers. Although the initiative is a novel step, its operational aspects demand more than what is being offered for enabling private/public agencies to leverage the opportunity and turn it into a grand scale programmatic intervention. Three main issues with the economics of the programme are identified in this article: clarity on target groups; financial feasibility and funding support; and rent fixation.

Formal affordable rental housing – who are the target groups?

As per the ARHC guidelines, the definition of “beneficiary” seems to be targeted towards vulnerable section of the society i.e EWS/LIG migrants, whose annual income ranges between ₹3—6 lakh. While the intention to serve a vulnerable group as primary beneficiaries is appreciable, it should be noted that the rental housing problem is not limited to only vulnerable groups, but encompasses wider sections of society. Across the income spectrum, rental housing provides a foothold into a new city for migrants, until they choose to purchase their own house. Hence, MoHUA should not address the rental housing problem in part, but as a whole. Thus, the definition of “beneficiary” in the guidelines could widen its target group and also encompass the MIG-1 and MIG-2 categories having annual income up to ₹18 lakh, commensurate with the criteria for ownership housing under other verticals of PMAY.

The expansion of the “beneficiary” definition would largely draw two benefits;

In addition to widening the net of beneficiaries, it is necessary to bring in more clarity on ‘urban migrants’ being referred to in the ARHC guidelines, as the current explanation is loosely worded and creates confusion between migrants and visitors. A definitive explanation to differentiate between migrant and visitor is required considering the fact that the guidelines also recognise long term tourists/visitors to educational/health institutions etc. as potential target groups. Over the years, NSSO has also modified the definition of ‘migrant’. For e.g NSS 55th round considered the minimum duration of continuous stay of six months other than the village/town he/she was enumerated, while in the NSS 64th round information regarding short term migrants was also collected by investigating the short-term movements of the population, who had stayed away from the village/town for a period of 1 month or more but less than 6 months during the last 365 days for employment or in search of employment.

For the applicability of the guidelines and to bring in more specificity, finer detailing and adequate articulation is required on this aspect. A consultative approach may be adopted by MoHUA by involving key research institutions, NGOs, representatives of the industry viz. hospitality industry, education industry etc. to arrive at a common consensus.

The operational guidelines mention funding support for ARHC scheme in two forms viz. Viability Gap Funding (VGF) and indirect benefits offered to the operator in terms of GST exemptions, FAR incentive etc. At present, VGF is available only for Model-1 (refurbishing existing vacant public housing stock), and no VGF is being envisaged for Model-2 where public/private bodies are envisaged to construct, operate and maintain the ARHCs on their own available vacant land. It may be noted that under Model-1, only a few thousand eligible units of leftover housing stock from the JNNURM/RAY scheme are available. While MoHUA’s intention to meaningfully purpose this is a welcome step, it is not going to make much dent on the rental housing demand.

Model-2 on the other hand is a progressive step, where public entities (having surplus land) or private entities have been encouraged to provide rental housing to meet the demand. Model-2 would mainly cater to meet two types of demands:

For captive demand, considerable attention is now being given by both private industrial groups and Industrial Development Corporations to develop worker housing, to retain workforces and provide them with safe habitation near their workplace, on the lines of townships developed by Public Sector Undertakings (PSUs) in earlier decades. A recent MoU signed between Foxconn, a Taiwan electronics manufacturing giant and the State Industries Promotion Corporation of Tamil Nadu (SIPCOT) to create Industrial Housing for its 19,500 employees is testimony to this. For other urban migrants, while majority of the demand for rental housing is met by the market, the Central Government has recommended public/private entities to take initiatives for provision of affordable rental housing under the ARHC.

In both cases, the decision of an entity (either private or public) for developing the ARHCs will be  dependent upon the economic principles and financial viability. Keeping all other assumptions constant; the key determinant of the viability of the ARHC complex is price of land in question, and the possibility of that land to be used for other commercial purposes i.e. opportunity cost. The financial analysis presented in the operational guidelines considers that land value under affordable housing use would fetch a return of 400% after 25 years. Taking the same assumption, if the same piece of land is used by private sector entity for commercial purpose, it would fetch better value. Hence it is imperative for Government to decide with which lens ARHC projects need to be looked at. Are they considered as social sector projects that meet public objectives of the Government to benefit the society at large, with  participation of the private sector for better operational efficiency? Or should they be considered as real estate projects wherein the private sector should look at viability and financial returns?

The issue of VGF is an important determinant in this situation, especially for Model-2 where MoHUA has not provisioned for it. This is a significant departure from the way the creation and operation of social sector projects are being looked at by the Government of India.  A simple illustration in the images below suggests that the private developer will not be able to make much revenue to achieve the viability of the project and would need additional support in terms of subsidised/free land or part funding support on CAPEX/OPEX from the Government in the form of VGF.

A serious deliberation is required on this front and the incentives/benefits should be designed accordingly. At present, affordable rental housing projects are not eligible for financial incentives and are completely out of the purview of the VGF Scheme of the Ministry of Finance (MoF).  In this VGF scheme, special attention is given to water supply, solid waste management, waste water treatment, health & education sector which have been defined as Social Sector Projects. The capital grants provided to such projects are in the range of 30%-40% of the project cost. Consideration of the ARHCs as social sector projects under the MoF promoted VGF scheme will provide substantial relief to the private sector to venture into this hitherto unchartered territory. Once the formal affordable rental housing market matures and new/innovative economic models are developed, MoF may exercise its discretionary power to exclude the ARHCs from VGF scheme.

The rationality of rent fixation by urban local bodies (ULBs)

As per the ARHC operational guidelines, the initial rent will be determined and affixed by ULBs (both for Model-1 and Model-2) based upon local surveys. However, the guidelines are silent on the methodology to be adopted for conducting the local survey and the rent fixation which are primarily driven by two factors:

Under the ARHC guidelines, the initial rent (i.e. for Year 1) will be fixed by the ULB. Then the rent will be enhanced biennially by 8%, subject to maximum increase of 20% in aggregate, over a period of 5 years. The issue that arises here is that the private sector does not know the base (especially in Model-2, where it involves both CAPEX and OPEX) of how will it develop a workable financial model. A similar problem will arise in in Model-1 also for determining the revenue from operations.

Irrespective of the location and associated infrastructure facilities, ULBs may have leverage to negotiate  rent fixation at optimal prices to cater to EWS/LIG beneficiaries for ARHCs developed by public agencies in Model-2 and for ARHC assets operated by private agencies in Model-1. However, for ARHCs projects constructed and operated by the private sector under Model-2 to cater the rental market demand (other than captive demand), financial principles of project viability shall be applicable. Again, VGF is a plausible option that Government could make applicable to ARHCs to offset part of the land and construction cost for making it attractive for private sector.

MoHUA envisions that the ARHC programme will propel new investment opportunities and promote entrepreneurship in rental housing sector by encouraging private/public entities to efficiently utilize their vacant land. However, more emphasis is needed to establish the case for the same by taking measures to make the underlying economics work, which will boost the affordable rental housing market and its scaling up through private sector participation.

It appears that ARHC’s Model-1 is simply a means of utilising the vacant houses under RAY/JNNURM that were constructed by ULBs. Beyond that there is no incentive for ULBs to push for creating ARHCs. Nowhere in both the models have ULBs or States been given the target to develop ARHCs. Conversations by the author with a few State Housing Boards indicates that there was not much interest from their side to part with their costly land for developing ARHCs.

In addition, regulation of rental prices without keeping in mind costs and time factors may further jeopardise this initiative, especially in the absence of VGF for Model-2. Thus more deliberation is needed with all the relevant stakeholders viz. public agencies, private entities and civil society, to tweak the provisions of the current ARHC scheme to take a balanced and inclusive approach that offers a win—win situation for both operators as well as prospective tenants.

(The views, thoughts, and opinions expressed in the article belong solely to the author, and not necessarily to the author’s employer, organization, committee or other group or individual. Another analysis of the ARHC scheme by the Working People’s Charter and CPR can be read here.)

Saurabh Bhatia is an experienced Development Planning professional. From the past 18 years, he has worked extensively with Government, Multilaterals and NGOs/Not for profit sector organisations on Urban Development, Housing & Environment issues.