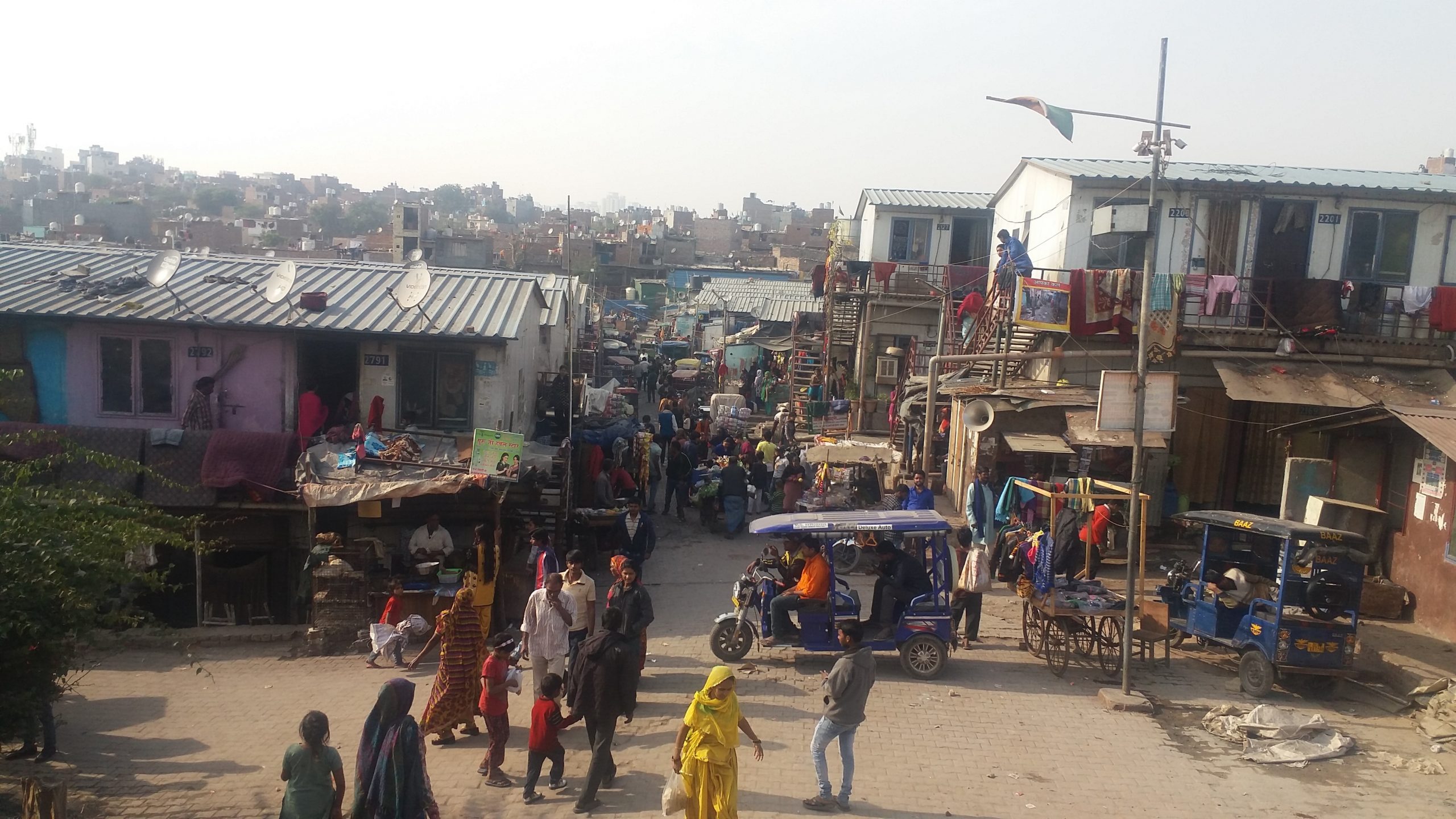 Transient and differentiated resettlement: The case of Kathputli Colony, Delhi

Drawing on over a decade of research on the Kathputli Colony in Delhi, this two-part series focuses on the complex processes involved in the in-situ rehabilitation of squatter settlements. This first part explains the differentiated nature of the resettlement processes. This involves exclusions caused by stringent eligibility requirements, opaque enumeration processes and delays in project implementation. Additionally, an unclear legal status has kept households in a continuing state of uncertainty.
By Véronique Dupont and MM Shankare Gowda  |  April 27, 2021

As part of the Master Plan for Delhi 2021, the Delhi Development Authority (DDA) endorsed slum in-situ rehabilitation as an alternative strategy to relocation in outlying resettlement colonies. This model, which is in line with the national strategy and already applied in Mumbai since the 1990s, promotes the provision of housing in multi-story buildings, under public-private partnership, using squatted public land as a resource. However, only part of the land occupied by the slum is used to rehouse its residents, while the rest is cleared for residential or commercial development for sale on the open market. This allows the private company winning the development contract to generate enough profit to cover the construction cost of housing for the poor. It does not imply, however, the end of resettlement on alternative sites, for slum redevelopment requires the demolition of the slum settlement and the relocation of its residents in transient accommodations during the construction of the rehousing complex. Based on extended research conducted since 2009, we examine this process in the case of Kathputli Colony, the first slum redeveloped under this model in Delhi, and highlight differentiated modalities.

The stepwise evacuation of a five-decade old settlement

Kathputli Colony was a 50-year-old squatter settlement spread over 5.22 hectares of valuable DDA-owned land, in a centrally located area. When its redevelopment was announced in 2009, the Colony housed around 15,000 people, amongst them a large group of folk artists – including many puppeteers – and artisans from Rajasthan who settled in this locality in the late 1960s. Other groups of migrants from various regions, with diverse lines of work, had since settled here. It had become a heterogeneous settlement comprising a number of distinct communities, differentiated along lines of geographical origin, religious affiliation, caste, and occupation. The resulting social segmentation translated into spatial segregation, with distinct sections of the settlement corresponding to different communities, and where varying housing conditions reflected socio-economic disparities. 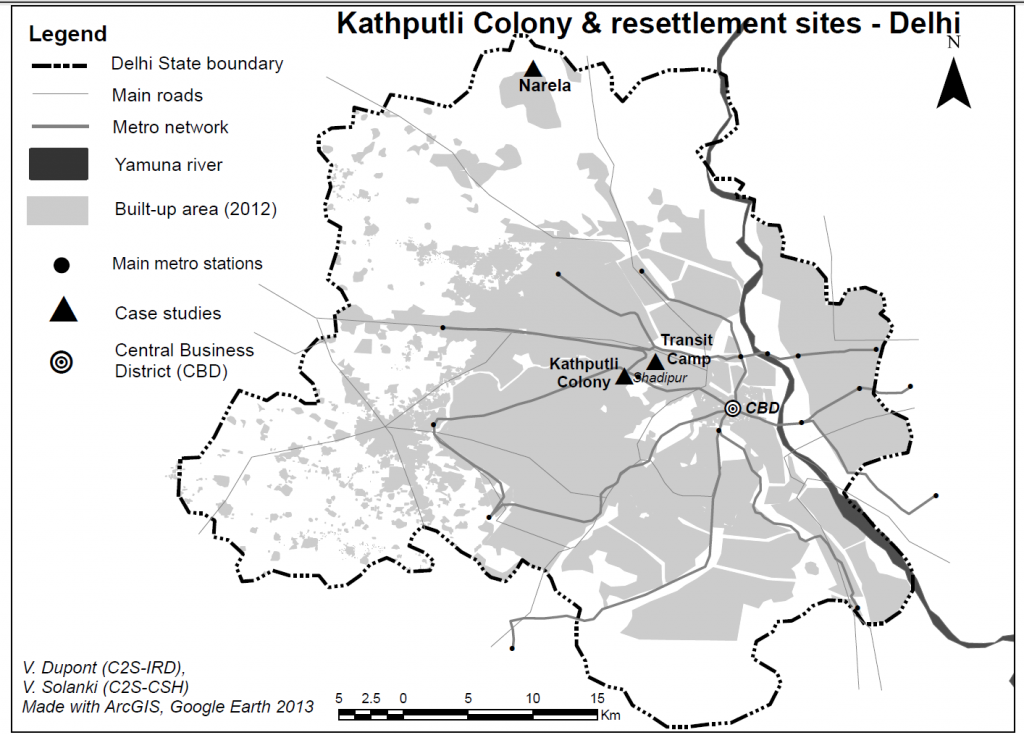 The redevelopment project involved transferring the families to a transit camp constructed on a site located on a rocky hillock, a wasteland, around three kilometres from the initial settlement. It consists of rows of prefabricated one-room tenements of 12 sq.m. per household, with neither kitchen nor individual water taps. Each row has shared bathing facilities, and several toilet blocks are installed along the boundary walls of the camp. Most of the 2800 dwelling units are located in one-level structures, apart from a few two-level blocks. 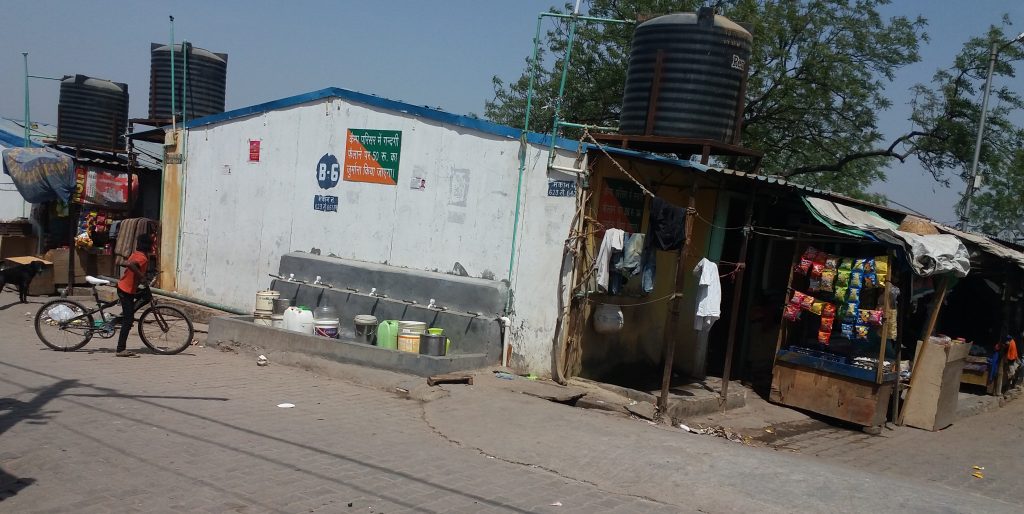 The DDA launched three evacuation drives to prompt the transfer of families to the transit camp. The first one in February 2014 entailed the resettlement of around 500 households within the next six months; the second one in December 2016 resettled around 800 households; the third one in October 2017 was followed by the total demolition of the settlement (Dupont, Gowda 2020). During the final evacuation, an estimated 2600 to 2700 households were forcibly evicted in three days by about 350 police personnel. Altogether, the aggregate number of displaced households proved to be far beyond the transit camp’s receiving capacity and the number of projected rehabilitation flats. This discrepancy in numbers is at the root of differentiated resettlement and exclusion. 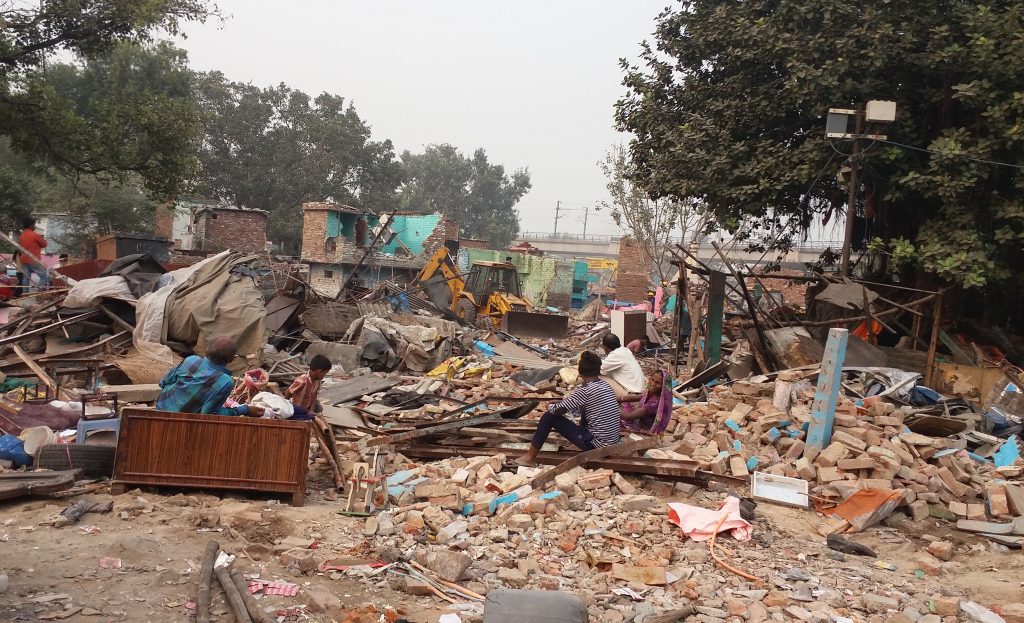 The Kathputli Colony redevelopment project was planned for 2800 households, based on contested identification surveys, the first of which was conducted in 2008. The settlement population naturally increased over the years, new households were formed, and new migrants arrived. Meanwhile, the “cut-off date” of arrival in the settlement, used as the main eligibility criteria, was extended several times following changes in the slum policy at the state level. To be eligible for the rehousing project, each household head has to prove his/her residence before a given date, based on a list of recognised documents, including registration on the voter list and ration card.

Two cut-off dates eventually applied for this project. This introduced a difference of treatment among the residents. Households with proofs of residence before 2011 were eligible for two-room flats in the in-situ rehousing complex as well as for accommodation in the transit camp. Those with proofs of residence between 2011 and 1st January 2015 were eligible for direct allotment of flats in Narela, in a DDA housing scheme on the northern outskirts of the city. Those who could not prove their residence before 2015 or that they formed a distinct household were considered as ineligible for any alternative allotment. Based on these criteria, the DDA established three lists of applicants that were released at the time of the final evacuation. They included, respectively, 2800 eligible for in-situ rehabilitation, 492 eligible for resettlement in Narela, and 771 who were ineligible. In other words, almost 20% of the applicants were entirely excluded from the rehabilitation scheme. Those residents listed as ineligible could appeal to the DDA Appellate Authority to contest their exclusion. As per DDA figures, by July 2018, 475 applicants filed an appeal; by October 2018, 324 cases were examined, 260 (80%) were rejected, and only 51 were found eligible.

The families relocated in Narela were allotted flats equivalent to the flats designed for the in-situ rehousing complex, namely two-room flats of about 25 sq.m. with kitchen, attached bathroom, and toilet. The financial contribution payable by eligible households is also expected to be similar, amounting to about INR 150,000, although till date no payment was asked from the occupants who consequently did not receive any tenure title. These families definitely accessed better housing conditions compared to their previous situation in Kathputli Colony, as well as to the families resettled in the transit camp. However, they suffer from all the usual inconveniences attached to resettlement in outlying sites. Since Narela is about 30 kilometres away from Kathputli Colony, hardships include considerably increased commuting time and cost to keep previous jobs, difficulties to find employment in the vicinity, lack of adequate school facilities, difficult access to health facilities, disruption of earlier social networks, security issues in the surrounding area.

Settling down in the transit camp: three batches of arrivals under different legal conditions

The households’ legal occupation status in the transit camp has varied over time, with those who arrived last experiencing higher levels of precarity. In 2014, the first comers signed a tripartite agreement with the DDA and the developer. This notarial deed was however very loose and lacked the accuracy expected in a proper legal document. In particular, a handwritten last point was added that “after taking over the land, around two years will be required to construct flats” [emphasis added]. This agreement concerned mainly the obligations of the “beneficiaries” in the transit camp, such as not encroaching on the camp and maintaining the place “in such a way that it can be returned in a proper condition to the developer”. It did not however guarantee the allotment of a flat in the rehousing complex. 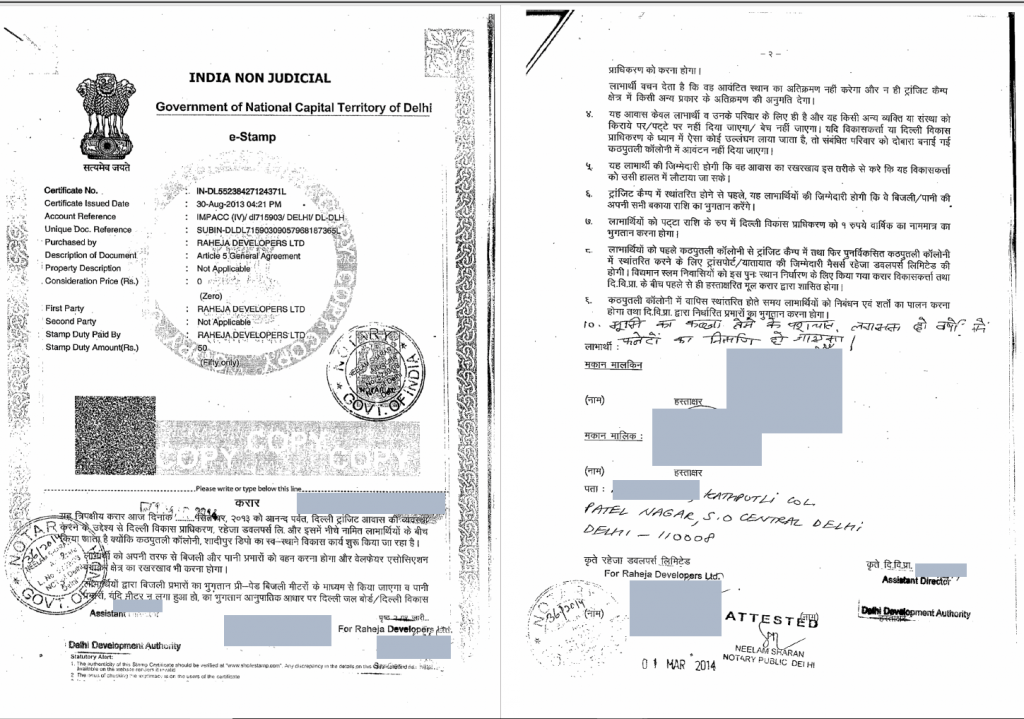 Tripartite agreement signed with the Delhi Development Authority and the developer by the Kathputli Colony residents who moved to the transit camp in 2014. Click here to download.

The households who moved in December 2016 and in the next few months benefitted from the active negotiations that took place in 2016 between the DDA and up-and-coming leaders of a pro-project group of residents that gained importance in Kathputli Colony. Thus, the revised tripartite agreement was more accurate; it provided the beneficiary households with guarantees to be allotted a flat and included specification such as size, financial contribution and maintenance charges, type of ownership. Most of the households forcibly evicted in late 2017 did not sign any formal agreement. They only got a “Demolition-cum-provisional-allotment” letter, which is not a notarial deed, and are therefore maintained under a particularly insecure status.

While construction of the rehousing complex progresses at a slow pace, the legal status of most households remains precarious regarding their future. The two-year transit period mentioned in the agreement (for those who signed it) is over, and the temporariness has become durable. This situation exacerbates the residents’ feeling of uncertainty and their frustration as they have to cope with new difficulties, which we examine in the second part of this case study.

This research is part of a collaboration programme on subaltern urbanism in India, between the Centre for Policy Research in Delhi and the French national Research Institute for sustainable Development (IRD). It benefitted from IRD funding especially through the JEAI programme “India – Urban Rural Boundaries and Basic Services” (2015-2018).