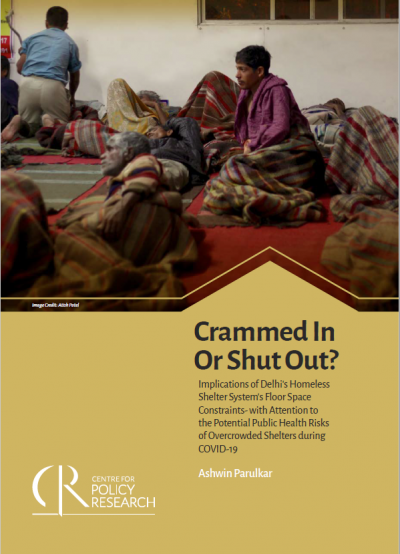 Crammed In Or Shut Out? Implications of Delhi’s Homeless Shelter System’s Floor Space Constraints – with Attention to the Potential Public Health Risks of Overcrowded Shelters during COVID-19

Through an analysis of shelter and homelessness data from the Delhi Urban Shelter Improvement Board and the Census, this study examines extent of overcrowding in Delhi’s homeless shelters and its implications on the ability of residents in these spaces to socially distance to prevent the spread of COVID-19. It examines the nature and implications of limited floor space across Delhi’s homeless shelter system to ascertain the extent to which the system’s capacity and coverage problems are rooted in shelter planning and design.
By Ashwin Parulkar  |  July 27, 2020
Download

In May 2020, about 50 residents of a cluster of homeless shelters near the All India Institute of Medical Sciences (AIIMS) hospital tested COVID-19 positive.  Officials from the Delhi Shelter Urban Improvement Board (DUSIB), the state nodal agency responsible for the capital’s approximately 220 24X7 night shelters, later admitted these residents to nearby hospitals but   did not initiate widespread testing in Delhi’s shelters.   The AIIMS shelter cluster consisted mostly of tent structures  set up by the government each winter on a temporary basis.  Their tenure was extended this year to accommodate more people in need during the nation-wide Lockdown.

AIIMS shelters were crowded spaces. The tents were 600 square feet in size and officially reserved for 50 residents – just 12 square  feet per person.  About 18 people actually used these tents each night, indicating that 33.8 square feet of personal space existed between residents. This is far below the national shelter floor space guideline of 50 square feet per resident stipulated by the National Urban Livelihood Mission Scheme of Shelters and endorsed by the Delhi High Court and the Honorable Supreme Court.

Floor space constraints pervade Delhi’s homeless shelter system. DUSIB allots, on average, 18 square feet of personal space to the 18,478 residents that the system’s 223 shelters can officially accommodate.  About 7400 people – 40% of the system’s official residential capacity – use these shelters. The amount of personal space available to these residents – the true as opposed to official shelter area – is 45 square feet per person. This tells us that  (a) the average Delhi shelter operates at full capacity to overcrowded conditions and (b) the low percentage of  homeless people who use the capital’s shelters represents a limit of how many people can access shelters, not merely the number who do.

In that context, this study examines the question:

What is the extent of overcrowding in Delhi’s shelters and its implications on the ability of residents in these spaces to socially distance to prevent the spread of COVID-19?

Through an analysis of (a) occupancy, residential capacity and floor-space data archived by DUSIB;  (b) district-wise homeless and overall population estimates tabulated by the Census; and (c) discussions with DUSIB and Centers for the Disease Control and Prevention (CDC) officials , this study examines the nature and implications of limited floor space across Delhi’s homeless shelter system to ascertain the extent to which the system’s capacity and coverage problems are rooted in shelter planning and design; and how in that context,