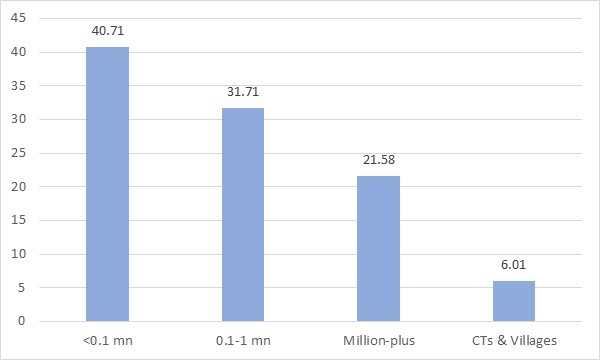 What does project sanctions data tell us about how the PMAY Urban is faring in small, medium and large cities?
By Sama Khan  |  July 24, 2020

In somewhat of a reversal from previous trends in centrally-sponsored urban schemes that focused largely on AHP and ISSR mode of housing, the Pradhan Mantri Awas Yojana’s Urban component appears to have sanctioned more units in smaller cities (<0.1 mn) followed by medium cities (0.1-1 mn) as compared to million-plus cities, credited to the preference for BLC housing under the scheme. We find that some villages that are in buffer of large and medium cities have been also included under PMAY-U.

Similarly, we examined the sanctioned housing units of the PMAY-U by its three verticals, beneficiary led construction (BLC), affordable housing in partnership (AHP) and in-situ slum rehabilitation (ISSR) for various city size categories. We find that the the majority of houses sanctioned in small towns (under 0.1 million in population size) are under the BLC vertical. Medium sized cities have a majority of BLC units but AHP projects have also been sanctioned here. In contrast, million-plus cities are dominated by AHP. We attribute these trends to a greater portion of tenure secure private lands being available in small and medium sized urban areas. Whereas land constraints in million-plus cities have created the conditions for AHP projects, a preferred model for supplying bulk housing for economically weaker sections (EWS) and low income groups (LIGs). These projects are executed in partnership basis across various private and public sector (usually parastatals) authorities. It is likely that the BLC and AHP projects sanctioned in villages and CTs are located in the peripheries of medium and large cities. 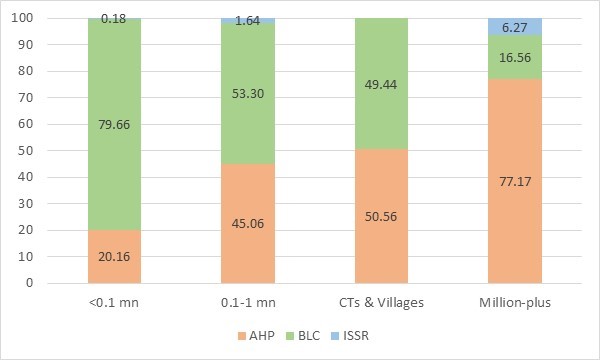 PMAY-U: Share of vertical components in each city size category

This data is drawn from a dataset collated by the Centre for Policy Research from publicly available documents. The project-wise PMAY data  was accessed from CSMC meeting minutes documents and collated upto town level. The collated tables represented varying formats and details that were formatted to constitute a common database. The database contains information updated until March 2018.