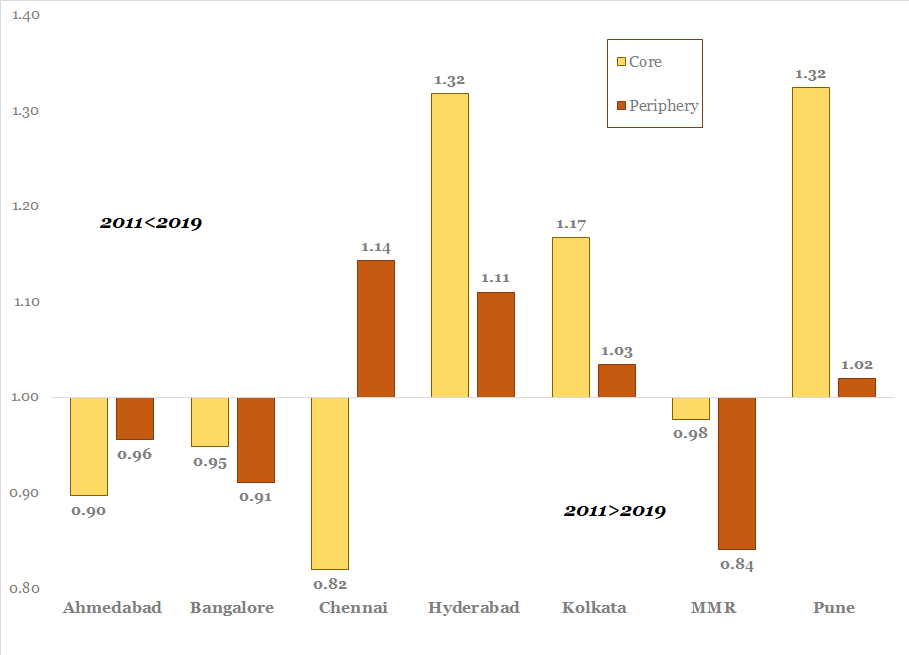 The private residential real estate market in urban India is diverse, and housing typologies vary within and across geographies. This is the third in a series of data pieces highlighting some of the characteristics of private real estate market in India across selected geographies between 2009-2019, based on data provided by Liases Foras, India's only non-broking real-estate research company.

The previous part in this series discussed the overall variations in growth of built-up area and real estate development in the peripheries and core areas of the eight metro cities. In this part, we will do a deep-dive into variations in sizes and prices of apartments, which are the dominant category of real estate in these eight metros.

The average size of new apartments is higher in the core areas of Hyderabad, Bangalore or Kolkata than any other cities, while Ahmedabad has flats of largest sizes coming up in their peripheries over time. The average size of the apartments have gone up over time in both cores and peripheries of the eight metros, most remarkably in Hyderabad, and is always marginally higher in the core, except for Ahmedabad. The higher size of the apartments in the core may be a function of the  pricing and purchasing profiles of the buyers living in the core and the periphery of these metros. In Kolkata, the average size of flats are significantly higher in core than the periphery, referring to the sprawling of small size housing units in the city, as most of the new supplies there have come up in the periphery over the last 10 years. The graphs below show the size distribution of new supplies across the core and periphery of the eight metros from 2011 to 2019, which reveals a declining gap across cores and peripheries in terms of size of new supply, except MMR and Chennai.

What are the price trends?

What are the variations in sales?

The diverging price trend across the cores and peripheries in Chennai can be attributed to the larger price differential across these spaces within the city, though there may be other factors contributing to this trend. It is notable that while the share of units sold to total supply of apartments increased at a higher rate in periphery in Chennai than the core, the share of periphery to total units sold dropped marginally from 2011-19, as seen in the figure below. In case of all other cities, the share of units sold in the periphery to total sales in the city has gone up over time.

To summarize, while private residential real estate development has been spatially expanding in all the eight metropolitan areas, there are significant variations in size, pricing and sales across the cores and peripheries of these cities. The cores and peripheries are evidently catering to differing real estate demand for various segments of the population, which will be investigated in the next series of data tales.