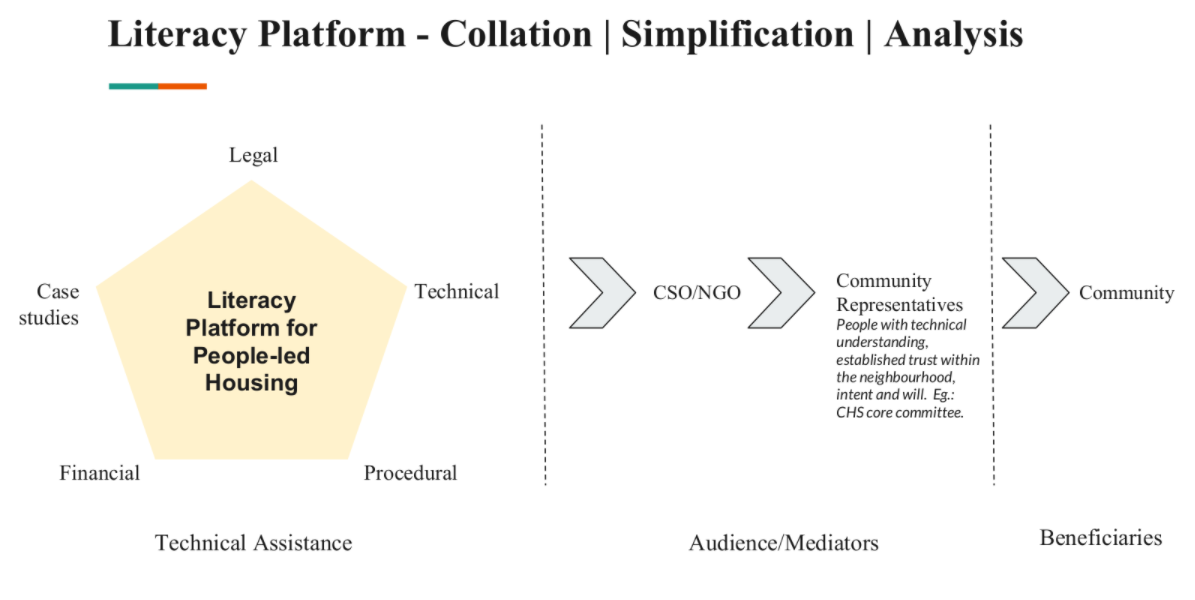 The role of access to information in empowering the poor is well-acknowledged in India and reinforced by the experience of the Right to Information Act, 2005. However, information asymmetries continue to hamper the ability of the poor to make informed decisions about their future. A new online resource seeks to address this gap in the context of housing. The IHR team speaks to the founders about their motivations, challenges and aspirations for this platform.

Last year, Rohit Lahoti, an architect and urban development practitioner, and Sayali Marawar, a social development practitioner, were among five teams who won the Equal Cities Challenge, the Nudge Foundation’s competitive incubation program to nurture innovations that benefit the lives of the urban poor. Their project, a DIY Toolkit for Community-Led Development aimed to help the urban poor co-produce their habitat through participation in the processes of ideation, planning and design. These ideas have now taken shape in the form of the Centre for Inclusive Habitat (CIHab). The IHR team speaks to Rohit and Sayali about their motivations, challenges and aspirations for this platform.

IHR: What urged you to work on the idea of housing co-production?

Rohit: Various conversations during my academic and practice experiences have thrown up the idea of self-redevelopment in the housing space. The idea of people building their own housing, with little or no involvement of a developer was planted in my head. I was inspired by the Baan Mankong model in Thailand and read heavily around ideas of collective housing. Sayali and I have known each other from school, and were also conversing around our common interests in housing.  The Equal Cities Challenge call for solutions for urban poverty from Nudge Foundation’s Centre for Social Innovation came at the right time. We zeroed in on the idea of developing a solution that enabled people to play a larger role in designing or thinking about their housing development.

IHR: How did you arrive at the idea of addressing information asymmetry through an online resource? How do you think this will serve the communities you have in mind?

Sayali: The idea evolved over time. When we started out, we had a very bold vision, I would say it was borderline naïve! We wanted to identify two pilot sites in Thane, and work with the community on the idea of slum self-redevelopment. We saw that the Slum Rehabilitation Scheme (SRS) was the dominant housing intervention in the Thane MMR (Mumbai Metropolitan Region) and this became the focus of our work as well. Of course, we understood that it was not as simple as a 6-month intervention where we would be able to mobilise people and achieve redevelopment. But we wanted to get started on something. So, we started to step into the field and went around all the wards in Thane, to almost 4-5 slums in each ward, talking to communities and figuring out what the sentiment towards community-led development is. We met architects, developers, SRA officials, NGOs and realized that many of the problems are because of information asymmetry and the low levels of awareness among the people who are intended beneficiaries of the scheme. The idea from the beginning was to come up with a resource, for urban poor communities, that they can use. We imagined a very actionable sort of a resource, more like a guide that you can read or engage with so that you have a better sense of how you can increase your participation in the housing development. Essentially, we wanted to see how to operationalize this within the SRS framework.

Rohit: Initially we called this DIY Toolkit for Community Led Development. We thought the toolkit would have various elements for improving literacy and awareness. For instance, it would decode regulation and explain the legal aspects.  Then it would explain the whole value chain of the process of slum redevelopment from the community’s point of view: how can the community engage, where should they intervene, do they even have the space to do that etc. And finally, it would collate the best practices drawn from projects/communities where this has happened already and we could take  inspiration from. These were like 4-5 key ideas that we started out with while this has eventually evolved into what you see as the Centre for Inclusive Habitat.

IHR: What are some of the challenges you have faced in your work and how have you dealt with them?

Sayali: Besides information asymmetry, there are so many other variables that factor into redevelopment. For instance, project funding is a huge gap in the ecosystem right now. Where is the institutional funding for redevelopment projects coming from? Then there is the political angle to it as well as community dynamics. These issues really overwhelm us. As individual practitioners, we don’t necessarily have political backing or connections, and going around the slums figuring this out is potentially dangerous. When we  come  in pitching self-redevelopment as an alternative to the very entrenched SRS model, we risk going  up against powerful developers and politicians.

Rohit: The competing narratives on redevelopment is a big challenge, which makes needs assessment difficult. We met landowners who agreed with the notion of community participation, but their ideas are subsumed within local politics. The strong nexus between the developer and the local politician is intimidating for land owners. There is also an overall hopelessness surrounding the SRS. We often get told that the scheme has been around for so long and nothing has happened, so people have given up on it. People also tell us it is not our cup of tea to intervene in such a complex issue like housing. This spectrum of responses is interesting but also hard to work with. Fortunately for us, even before talking substantially about a project with the community, we realized these dangers and understood the political climate in Thane. We decided to be very strategic about which wards to intervene in, how to approach communities and interact with them.  We were really hoping to find good civil society partners to work with and bridge the community connection for us. However, the civil society network working on housing and urban development issues in Thane is extremely sparse, so this continues to be a challenge.

Sayali: Our intent was never to engage directly with the end users or the end community. We did not have the reach, nor the ability to engage and stay invested with the beneficiary communities. We also did not want to go deep into a single community, like an NGO, start with the project and get locked in for many years. Instead, we want to build platforms for one city at a time, to make information accessible around whatever housing interventions are relevant for low-income communities in that city. For example, if we go to Nagpur, we might not get into making communities understand SRS because it has not taken off there; rather we would focus on the tenure upgradation efforts that are ongoing there. So our idea is to engage directly with a CSO, NGO or community representative, who can appreciate the repository, interpret it and take it forward.

Rohit: One positive externality of what we are doing has been the value of our resource to students of architecture and planning. They are able to build their research and ideas on what we have put together and move faster towards implementation-based projects. So while an online resource like ours has value for people who are directly working on housing projects, like contractors, engineers, civil society and community representatives, it is also useful to this other set of audiences in the academic space. We are still trying to understand who else it can benefit within the development sector.

IHR: Do you think CIHab is accessible? What are you doing to promote it amongst the audiences you have identified?

Sayali: Right now, this is an online repository in a website form. We were aware that if we talk about our primary target audience of civil society organizations  and community representatives, a website might be the last place that they will go to. Hence, we treat this as a beginning and we shall continue to look at other modes of dissemination for this content. One feature we added to make the platform inclusive and interactive is through a  community forum where users can comment, engage in dialogue, ask questions and seek clarifications. Having all the material on the website available in Marathi was also an attempt at making the platform more accessible to the communities and those who work directly with them. Even though it was difficult to execute a bilingual website,  we decided to invest time and effort on it.

Rohit: For the intended audience, CIHab would need to go beyond the confines of a website. The modes of reaching out and promoting this resource range from conducting workshops in the targeted neighbourhoods to developing shared knowledge through relevant conversations around people-led housing. 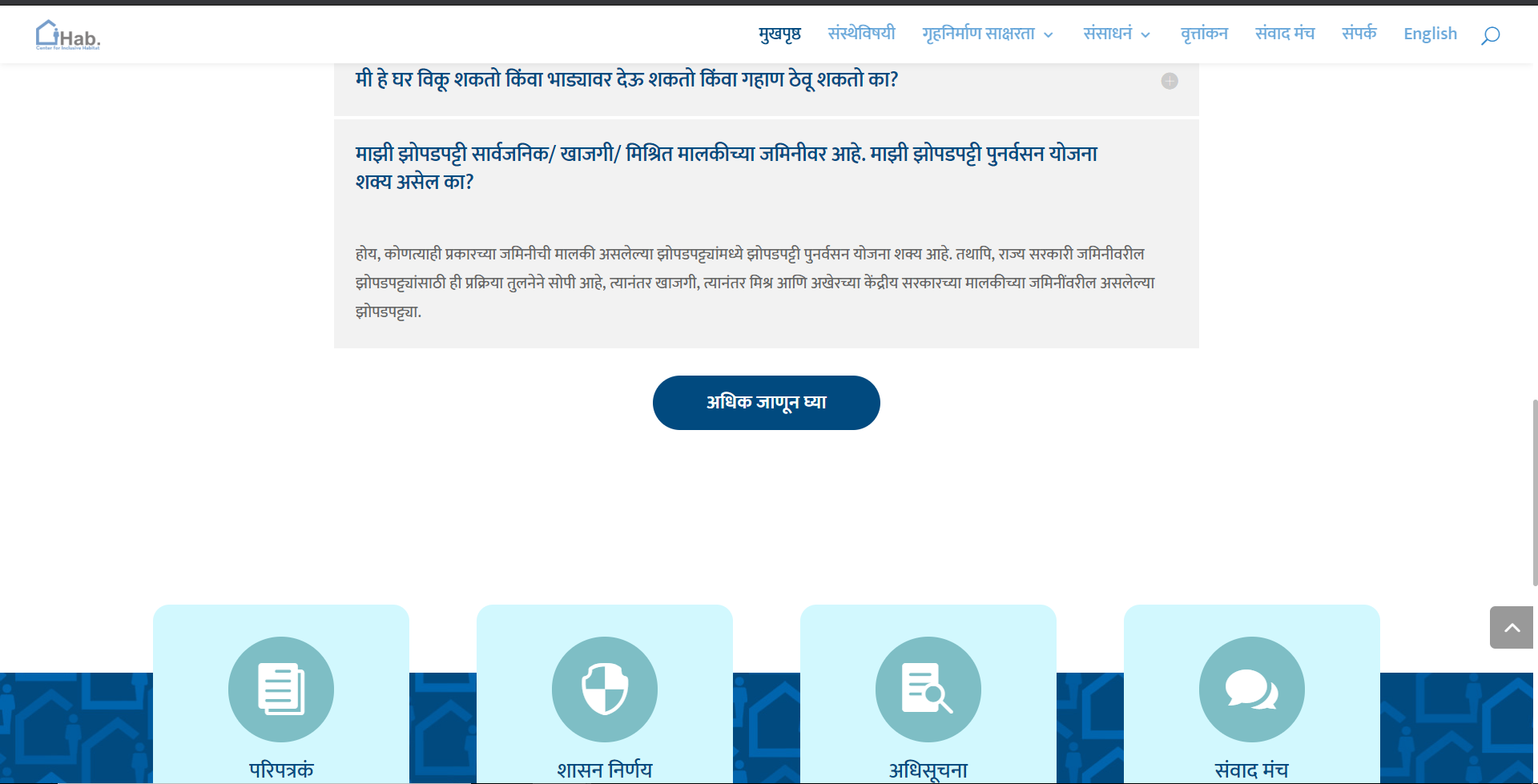 Marathi version of the CiHAB website showing FAQs and links to resources.

IHR: What are your ideas for the future?

Sayali: One part of our work is a knowledge product, a repository which would be a public resource, completely accessible to people. What we have come out right now is along these lines. The Equal Cities Challenge gave us the push we needed to do something concrete and put this out. We have to think about other modes of deployment for the content as we go forward. An app could be one option. We have to still think about how to push out this content, in bite sized units, and how to make it easy to browse, share content, etc. While we wanted to have a very practical solution, we have also been aware that to grow, there has to be some business case and a revenue model. We aspire to come up with a concrete offering/product that can help communities in actively participating in their housing development.

(The CiHAB website is available in English and Marathi.)