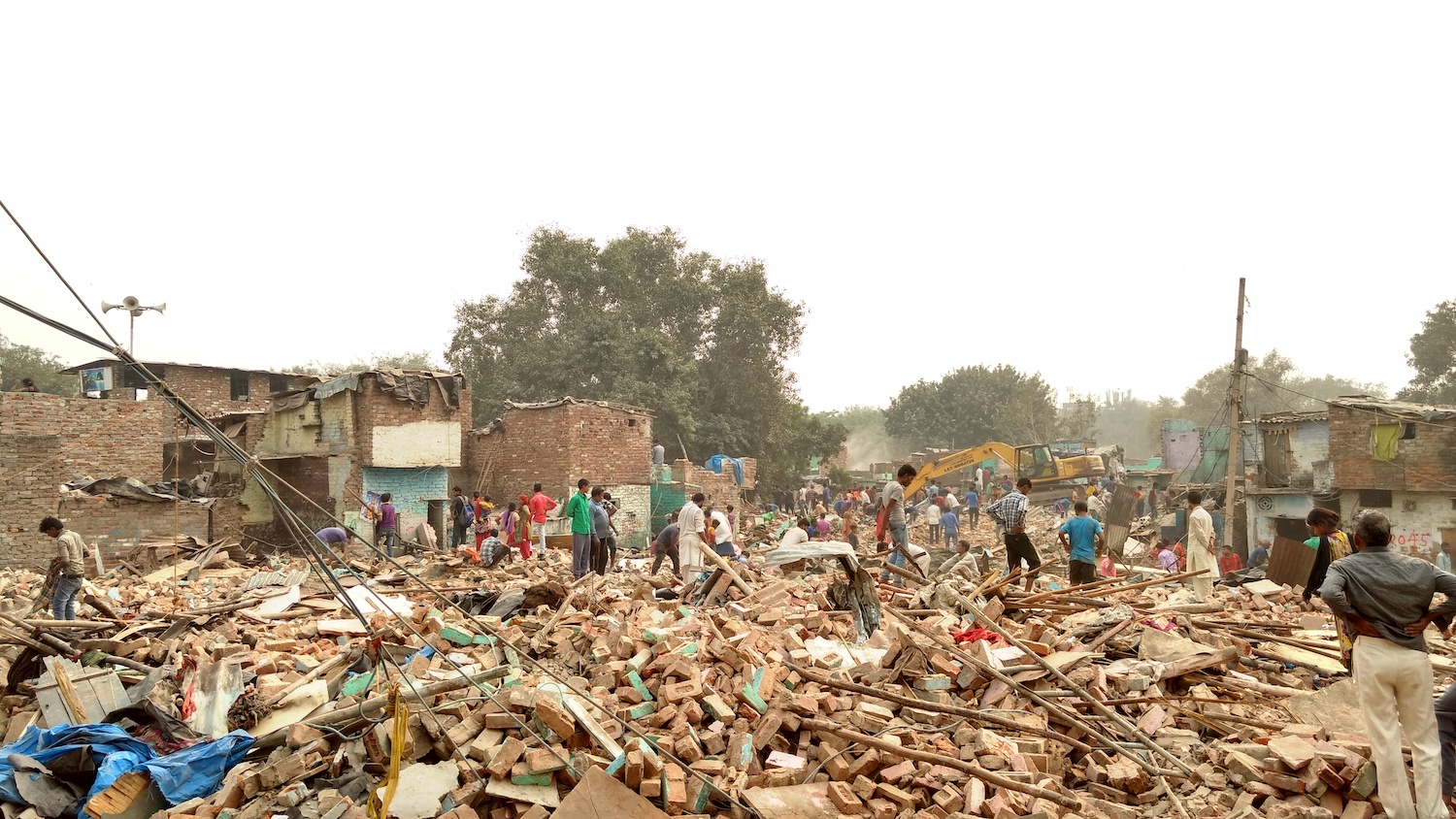 Bulldozing Due Process: Motivated Demolitions of Informal Constructions in Delhi

Last week in the area of Jahangirpuri in Delhi, residents watched as bulldozers arrived early in the morning, and started hastily demolishing shops and homes. Videos of the bulldozers in the area surfaced online, showing a large crowd gathered, and residents imploring the authorities to spare their homes. One of many resettlement colonies formed in […]
By IHR Team  |  May 4, 2022

Last week in the area of Jahangirpuri in Delhi, residents watched as bulldozers arrived early in the morning, and started hastily demolishing shops and homes. Videos of the bulldozers in the area surfaced online, showing a large crowd gathered, and residents imploring the authorities to spare their homes. One of many resettlement colonies formed in the city in 1975, Jahangirpuri is home to more than 200,000 people from socio-economically weaker strata of society, who were forced out of slums and resettled on plots in the area, where they built pukka houses over the years.

This demolition drive was initiated only four days after the area was put on high alert following rioting and violence between two communities during a religious procession, which left several residents and police personnel injured. Injudiciously, following this communal violence of last week, the North Delhi Municipal Corporation (NDMC) scheduled an “encroachment removal action programme”, in response to a letter written by the President of the Delhi BJP, the party holding office in the NDMC. The letter called for the demolition of these ‘several illegal constructions and encroachments done by anti-social elements and rioters in the Jahangirpuri area’ a day earlier. In response to the tense situation in the area, special police security was also requested by the civic authority for their anti-encroachment drive to maintain law and order.

The bulldozers reached in the morning with even the Mayor of the NDMC present at the site, and started to break down and demolish shops and homes that were targeted as encroachments. Petitions were presented to the Delhi High Court and the Supreme Court immediately, after which the SC issued a stay order. According to the Delhi Municipal Corporation Act, 1957, a five days notice has to be given before any demolition can be carried out, and this can be challenged before an Appellate Tribunal. Residents and activists in their statements said that this process was not followed: no notice for demolition was issued, let alone any opportunity or time to challenge it. Though the demolition was eventually stopped, shops and homes were damaged and brought down, all belonging to poor, working-class, mostly Muslim households. Moreover, the timing of the demolition drive and the letter written by an executive of the ruling party begs the question of whether this was just a routine ‘anti-encroachment’ drive, as mentioned by the NDMC, or a politically motivated exercise targeted at a certain community.

Without a substantive right to adequate housing, the urban poor in India are forced to reside in these informal and often ‘illegal’ settlements, usually the most viable form of survival for many. This is due to a scarcity of space within the urban, unaffordable housing options, and general bureaucratic indifference. These residents are termed as ‘encroachers’. Though seemingly, these settlements are often left untouched for years, with a combination of constant negotiation, political mobilisation, and appeals to the courts.

This dichotomy of bureaucratic indifference and constant negotiation though is often broken by politically driven sentiments, like in the case of Jahangirpuri, and always at the cost of the urban poor’s homes and livelihoods. As it happens, these public lands are sometimes reclaimed by the government, either for infrastructure projects, beautification drives, or even politically motivated actions. In these cases, without following ‘due process’, demolition drives become standard practices, leading to the eviction of households that might have lived there for years, if not decades.

In the case of evictions and resettlements in Delhi, over the years, communities have mobilised to use both courts and political advocacy to make themselves seen and their contributions to the city recognised, which has resulted in a series of judicial pronouncements and executive policies. These due process and measures rely on Constitutional provisions and India’s commitments under international law, extending at least some procedural safeguards to protect and safeguard communities living in these informal settlements against the threat of evictions. These safeguards have stopped many evictions over the years, though leave the residents of these informal settlements no choice but to trust in the judicial and advocacy process.

This recent case only goes to show that in the absence of ‘due process’ demolition drives and evictions carried out can have a lasting and damaging impact on communities. Delhi is no stranger to demolition drives, a stark reminder for the Jahangirpuri residents being the 1976 Delhi Development Authority’s (DDA) Turkman Gate demolition drive. The circumstances for both the demolition drives may have been different, though the outcome is the same: displaced households and razed livelihoods. In these circumstances, due process is particularly important to marginalised groups such as slum dwellers and religious minorities, because it provides a legal foothold in the treacherous terrain of their everyday existence in these informal settlements. In Jahangirpuri too, the stay on the demolition came in response to a plea in the Supreme Court by a resident whose juice shop was damaged in the demolition, arguing that the various legal procedural requirements described earlier were violated.

A new policy brief from IHR documents these processes and provisions in Delhi, where attempts by informal workers and communities to occupy space and create livelihoods in the city have continued in defiance of the State’s repeated attempts to evict them, and the tension between the two has been a regular feature of city-building since Independence.

The report can be accessed here.