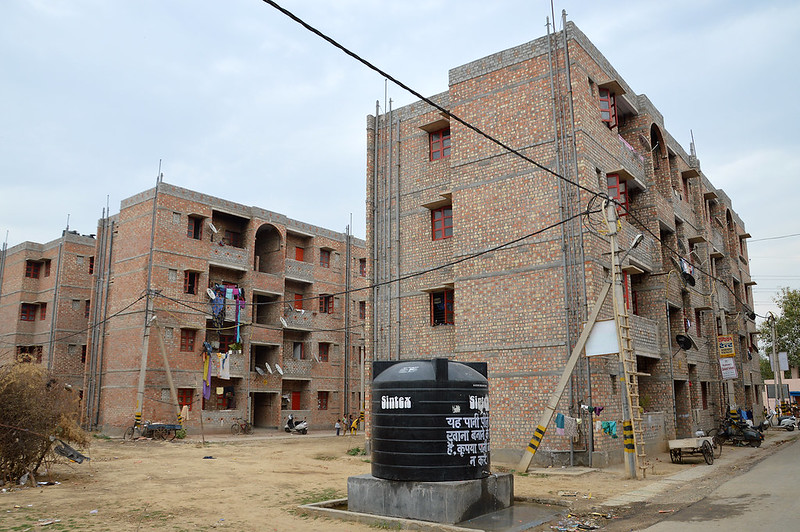 Life in Baprola: Post Resettlement Stories of Inadequacy and Vulnerability

Close to 900 families live in the ordered stacks of four-storeyed flats in Baprola in west Delhi. After being evicted from their informal bastis within the city, they were herded and resettled into these low-rise flats, each with barely enough space to house the families of four to five members. Pushed far from their places of work, with peeling plastered walls and water shortages, the residents lament about their state of residence, their grievances unheard and unseen, all but forgotten in the peripheries of the city.
By IHR Team  |  May 12, 2022

Close to 900 families live in the ordered stacks of four-storeyed flats in Baprola in west Delhi. After being evicted from their informal bastis within the city, they were herded and resettled into these low-rise flats, each with barely enough space to house the families of four to five members. Pushed far from their places of work, with peeling plastered walls and water shortages, the residents lament about their state of residence, their grievances unheard and unseen, all but forgotten in the peripheries of the city.

But who are these people who are resettled in these colonies? Bursting at the seams, Indian cities often have a large urban population living in informal settlements like slums. Pushed by a scarcity of space within the urban, unaffordable housing options, and government indifference, these people, comprised largely of an urban poor and migrant population, are forced to live in these informal settlements, often located on vacant public land. Inhabiting these spaces becomes the most viable option for survival, in terms of finding work, accessibility to social welfare, and availability of transportation. But as our cities keep growing and the space crunch becomes worse, these vacant public lands are often reclaimed by the government, either for infrastructure projects or city beautification drives, leading to the eviction of the households that might have lived there for years, if not decades.

In Indian cities, this unregulated process of evictions leaves many without homes, almost overnight, their entire lives overturned and erased. Evictions are carried out leaving people with no process of an effective judicial challenge, and worse, not even a quality rehabilitation system. Even when evictions are inevitable, often the rehabilitation and resettlement processes leave much to be desired. The Baprola Phase 2 resettlement colony, located 25 kms to the west of central Delhi is a case in point.

Built under the sanction of RRAY and JNNURM, many households were resettled here by the Delhi Urban Shelter Improvement Board (DUSIB) in low-rise apartment blocks, spread over 87,000 sqm. Each Dwelling Unit (DU) was designed as a 25 sqm space consisting of one room, kitchen, bathroom, and a living area. Moreover, evicting these people from their homes was not enough. Above everything else, an allotment fee of Rs. 1.42 lakh was charged by DUSIB, of which 20% was earmarked as a maintenance fee for a five-year period.

These multi-storey apartment blocks built to house evictees from informal settlements, are located in the peripheries of the city where land is cheaper, relocating households far from their place of work and increasing the struggle to earn even a living. There is a shortage of affordable transportation options, with limited bus routes, increasing the precarity of livelihoods of the people resettled here. The concerns and problems do not end here. Even basic infrastructure like roads, streetlights, and drainage are missing from the Baprola resettlement colony. These issues are compounded by poor quality of construction of the apartment blocks and DUs. Safety, accessibility, and adequacy become major issues that plague the households living here.

The findings of the DHRTF report of the assessment of the Baprola resettlement colony, point to a host of issues and problems faced by the residents. From insufficient space within each unit for a five-member household, a lack of elevators and ramps for access to the upper floors, to supply of potable water within the flats, and even structural issues in the apartment blocks like cracks, peeling bricks, moisture and dampness within the spaces, the residents who were resettled here face a massive challenge in living a decent and dignified life. Of the 110 households surveyed, 64% reported structural issues within their dwelling units. Cracks, moisture, dampness, and peeling bricks on the outer façade, decrease the quality of life and subsequently increase the risk to the lives of the inhabitants. The COVID-19 pandemic further increased the health risk of the residents, who found it unable to practice social distancing and isolation in the limited space within each dwelling unit.

Even though the residents paid close to Rs. 30,000 as a maintenance fee to DUSIB for a five-year period, almost 40% of all households reported carrying out their own repairs. Their grievances raised to DUSIB went mostly unheard, with only 10% of the complaints resolved. The appearance of such structural and construction issues so soon after inhabitation only points to the poor quality of construction, materials, and finishes. Soon the five-year contract will end, with DUSIB no longer accountable to repair and maintain the colony, and the responsibility will fall onto the residents without any measure of reprieve. The resettlement project by DUSIB intended to improve the evictees’ quality of life, instead has plunged them into deeper financial and social vulnerability.

The entire eviction and resettlement process only works against the residents of these informal settlements, whose lives are uprooted and displaced, without suitable compensation in the form of adequate and accessible housing. From start to end, the residents are subject to the constant threat and vulnerability of loss of livelihood and shelter. The inconsistent application of the safeguards provided by the courts during the eviction process coupled with the inadequate resettlement housing provided without adherence to the stipulated standards of construction and quality, only increase the detrimental effects of eviction.

As is evident from the Baprola case, the end result of resettlement needs to follow minimum quality standards to ensure a dignified inhabitation. The DHRTF report on Baprola specifies measures to improve the living conditions of the residents, including the assessment of materials used in construction and suggests that repairs be carried out in a timely manner and grievances be addressed. These measures are certain to create a more dignified and habitable environment for the evictees, who have already certainly faced a distressing experience in losing their homes and livelihoods.

Read more about the quality of construction in Baprola in the assessment report by DHRTF which can be accessed here.