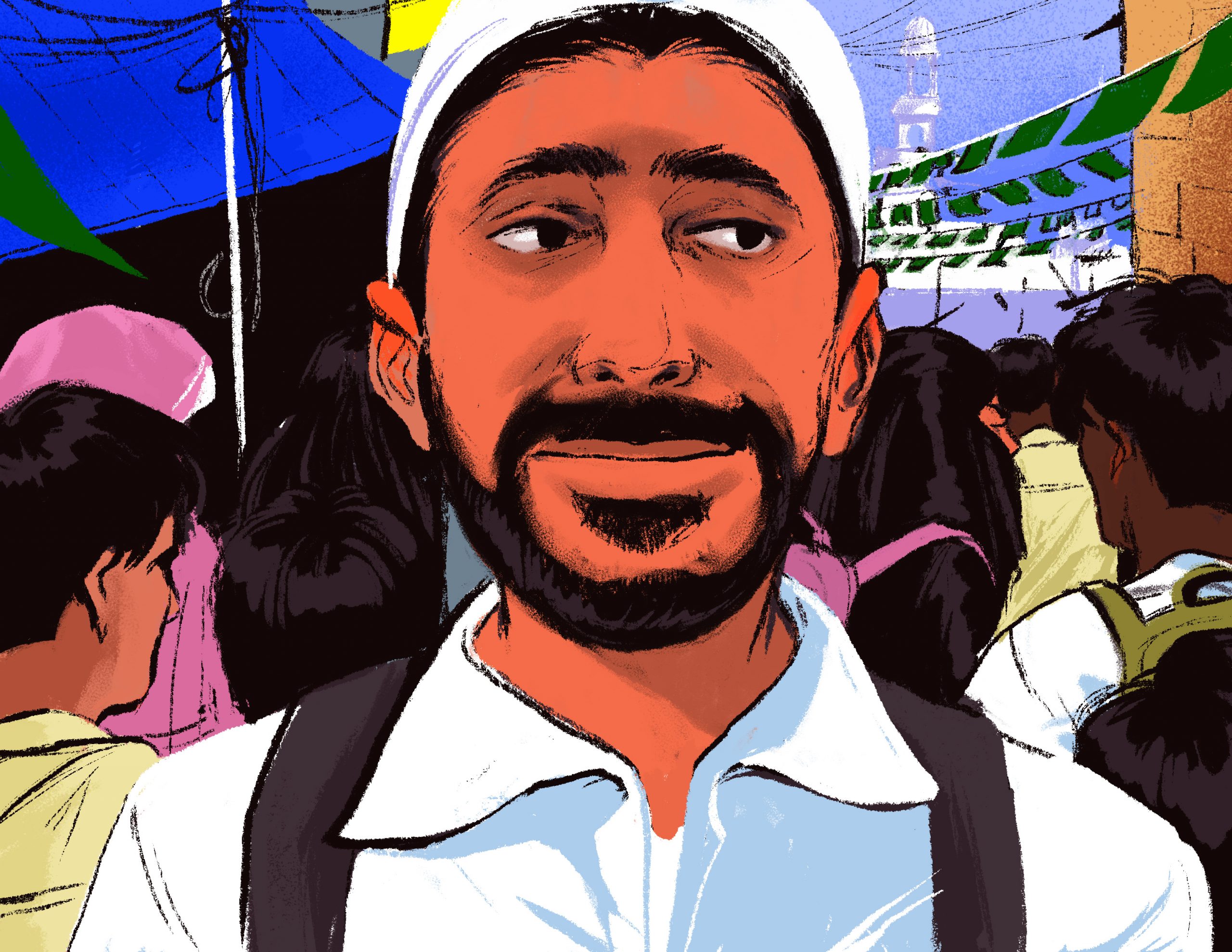 Discrimination in rental housing shapes our cities, demarcating what spaces are ‘open’ or ‘closed’ to some citizens. Interviewees told researchers of the Housing Discrimination Project that it makes Muslims feel safe only in some areas, unwelcome elsewhere.
By M Mohsin Alam Bhat and Asaf Ali Lone  |  March 2, 2021

Five years after coming to Mumbai in 2010 to train as a journalist, Zakia, now 30 years, decided to leave India’s city of dreams, discard her own and move to Himachal Pradesh, where she now works at a hospitality company.

“I could no longer stand Bombay,” she said. “Bombay made me feel constantly conscious of my religious identity.”

In her interview to researchers of the Housing Discrimination Project, Zakia reiterated a thought shared by several other Muslim tenants in Mumbai and New Delhi—that in a severely segregated city, the costs include a drawing apart of communities and heightened prejudices and, eventually, sharper inequality as minorities are often left with fewer public amenities and resources.

Part I of our two-part series on the Housing Discrimination Project, a three-year field research project, presented evidence of widespread religious discrimination in rental housing and its impact on Muslim tenants. But rental discrimination impacts everyone by maintaining segregation in cities.

‘Ghettos’, The Price Of A Sense Of Security

Asked why they choose to live in Muslim-concentrated localities, Muslim tenants told researchers of the Housing Discrimination Project that they located and selected their homes, like most city residents, through networks of friends and family. Many chose neighbourhoods based on cultural and culinary preferences.

But the most common reason was the need for safety, and the sense of security in numbers that Muslim-concentrated colonies and layouts provided.

In their seminal book Muslims in Indian Cities, Laurent Gayer and Christophe Jaffrelot said, “The ongoing ghettoisation of Indian Muslims in Indian cities…is primarily the outcome of organised violence.” Interviews with Muslim tenants and with brokers in New Delhi and Mumbai bear that out.

They confirmed that there is a premium on security amid the ever-present danger of sectarian violence, leading many communities, especially minorities, to huddle together. As one property dealer in suburban Mumbai’s Andheri remarked, “Har aadmi apna bachav karke chalna chahta hai aur chalta hai. (Every man wants to take steps to keep himself protected and does so.)”

This segregation has costs for our society and polity. Various studies in non-Indian contexts have noted considerably lower standards of health, education and emotional well-being in segregated localities for minorities. Segregation alienates communities, aggravates crime, and even lowers the general economic standards of a city.

The Daily Humiliation Of Segregated Spaces

Many Muslims who rent spaces in Muslim-concentrated localities said they were led there by their experience of being rejected by home-owners elsewhere, and then by the fear of more rejections.

Wajahat, who lives with his family in a one-bedroom apartment in Old Hauz Rani, a Muslim-concentrated working class neighbourhood in South Delhi, used to live with friends in Ashok Vihar and then in South Extension when he first came to the city from Jodhpur 12 years ago. “I never faced any discrimination,” he told researchers, “because it was a mixed group.” But when he moved out of a shared home with Hindu and Muslim friends five years ago to live with family members, he began to look for a house in various localities, including Malviya Nagar, and was unsuccessful.

“Kuch baat nahi banti thi (nothing worked out),” he said. Brokers offered him many options, but landlords did not want a Muslim tenant. Finally, a friend living in Hauz Rani helped him find a house.

The humiliation of being rejected was a common theme in interviews. A few streets away, 25-year-old Sajid Siddiqui had a similar story to share. He came to Delhi from Allahabad a year ago. He tried to find a house in Gurgaon, Saket and some parts of South Delhi, but failed. Brokers told him they would show him properties, but could not guarantee whether landlords would be willing to consider him as a prospective tenant. Having faced rejection, Siddiqui finally found a house in Hauz Rani with a friend’s help. But with a sense of alienation from the rest of the city that appeared out of reach.

Steered To ‘Ghettos’ By Brokers

Numerous other Muslim tenants who may not have directly faced rejection by flat-owners said during interviews that brokers insisted on pushing them towards Muslim-concentrated areas. Brokers often did this contrary to their wishes.

Alisha moved to Delhi to work in an NGO in 2015, and has often found herself struggling with house-hunting. “When I first approached brokers,” Alisha said, “many would warn me against certain areas as being dirty, as being full of Afghans and Kashmiris.” Then they would find out that she was a Muslim, and would promptly try to interest her in a home in precisely those areas, insisting that they are actually “not that bad”.

Asma, who moved to Mumbai to study at the premier Tata Institute of Social Sciences in 2016, said brokers constantly referred her to the so-called ‘Muslim areas’. One broker suggested that they rent a house in Govandi. According to Asma, even as he made the suggestion, he also cautioned them about safety in the locality. “It was infuriating,” Asma recalled, “that he assumed the area was unsafe because it predominantly had a Muslim population.”

Zakia, who left for Himachal Pradesh soon after her journalism course, said she does not fit the stereotype of a Muslim girl’s appearance. “I look like everything that a Muslim is not supposed to look like,” Zakia said, adding that she could not imagine what kind of discrimination people with more stereotypical Muslim names and appearances would face.

Feeling Unwelcome In Parts Of The City

The most striking finding of the research was the profound and widespread feeling that Muslims were not welcome outside the so-called Muslim localities. Muslim tenants who were respondents consistently said they were aware of housing discrimination against Muslims and felt there was no point even trying to find a home in some areas.

Aisha, a homemaker in Delhi’s Abu Fazal Enclave, came to Delhi from Varanasi after her marriage to Kabir. They never faced discrimination in housing but her parents-in-law and friends had told her about their experiences.

“If you have the M factor in your name, you can have problems,” said Kabir, who works with an Australian real estate firm in Gurgaon. He had never personally interacted with a broker. “But I know a friend who was denied housing in Jasola where Hindus are in a majority.”

Naved, who lives in Delhi’s Shaheen Bagh area, had not faced discrimination himself but he had “heard stories” from his friends. Asked what stories these were, he said, “The usual stuff. Someone went to see a house, went upstairs and, as soon as the introductions happened and names were exchanged, the broker stopped showing flats.”

The very real prospect of facing discrimination, rejection, and being pushed around by brokers appeared to have created a barrier among Muslims to even consider looking for rental homes outside Muslim-concentrated localities.

Ali, who works at an IT company, came to Delhi in 2014. He lives in a three-bedroom apartment in Batla House. We asked him why he had looked for houses only in Batla House and Zakir Nagar. Ali laughed.

Taking a deep breath, he said, “Firstly, you will not get a flat anywhere else, and then there is a question of security.” One of his friends was rejected as a paying guest after she was allotted a space, Ali said. “They told her that you are a Kashmiri and a Muslim, so you had better leave this place,” he said. “She was apparently also told by the owners not to tell anyone (if asked) that she is a Muslim. Due to this incident she was very upset.”

Many who live in Muslim-concentrated localities said there is an overwhelming feeling of ever-present discrimination that sits alongside their everyday experiences.

Researchers asked Akram Khan, 30, who lives with his family in Delhi’s Hauz Rani, whether he would move to the surrounding areas of Malviya Nagar that may have more space.

“I know that they do not like Muslims and do not give them houses easily,” he responded. How did he know that? His friends had faced many difficulties, he said. “If you go that side, or visit the park, you can see from the reaction of people that they do not want us to go there.” He said people’s body language changes on seeing people from their area. “For people living in Malviya Nagar, Hauz Rani means living in a lesser area, said Khan.”

It is not only actual rejections that push people and communities into segregation. The practices followed by brokers, owners, housing societies and builders implicitly demarcate which spaces are open and which will be closed to some people.

Discrimination has become part of the fabric of the rental market, setting the terms of its unwritten rules. It is these unwritten rules— the urban common sense—that convinces numerous Muslim tenants that they are not welcome.

This goes beyond the strict confines of the rental market. From interviews with Muslim tenants, it is clear that ordinary interactions among people play a profound role in shaping our cities. They remind them everyday of who belongs, and who does not.

Interviewees’ names have been changed for confidentiality. This piece was first published by Article 14 on February 12, 2021.

2 responses to "Cities Divided: How Exclusion Of Muslims Sharpens Inequality"

One of my projects was about Job Centralization. I often encountered people who were hired by large Pharma companies in Bangalore and Ahmadabad. They (both being Muslim men) looked for a house 6 and 8 months respectively, were not able to find a single accommodation that they could make permanent. This is great work, but I feel like this problem is much much deeper.

Of course! It needs a lot of attention. Thank you for sharing! What specific research gaps do you see that need to be addressed?