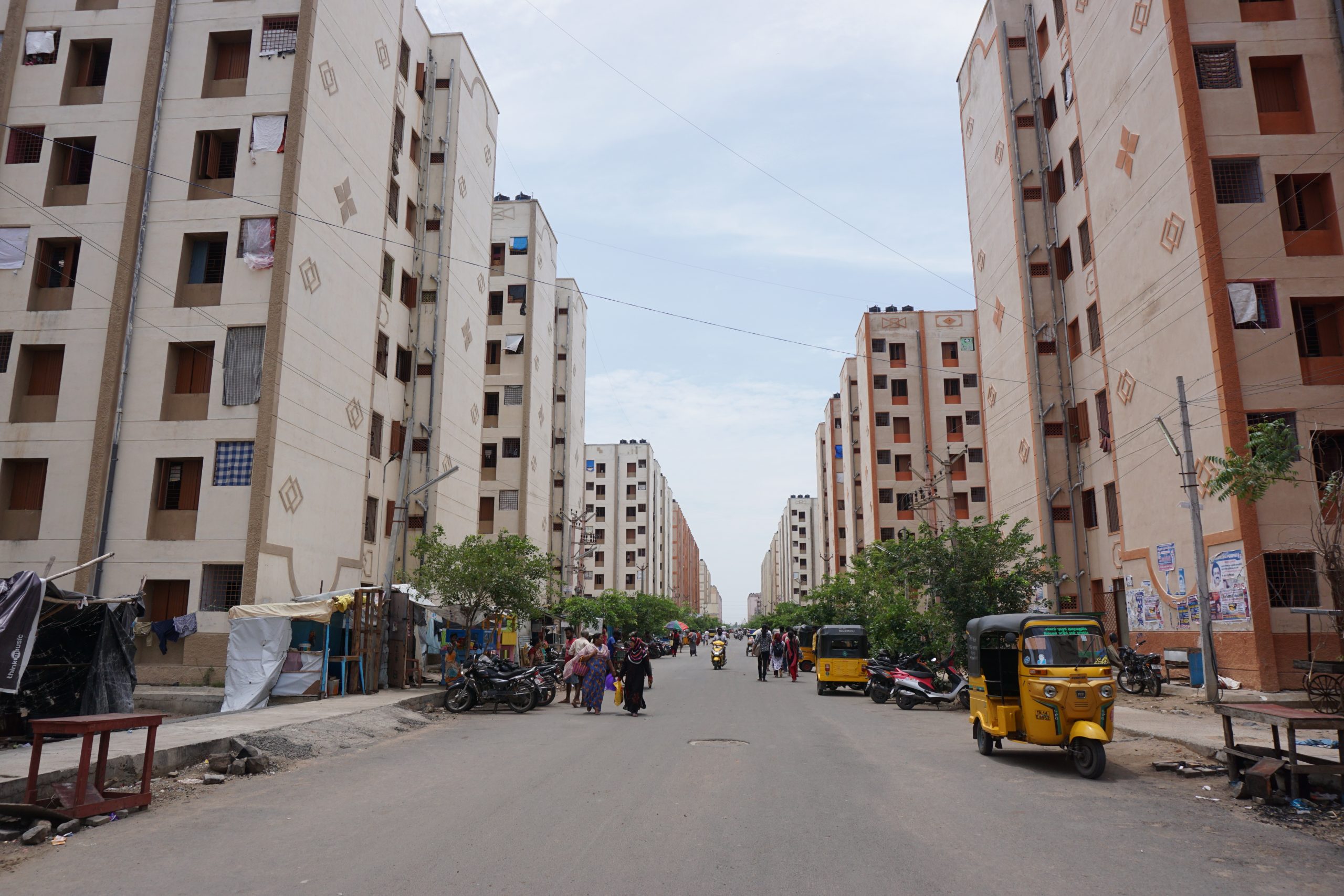 In October 2021, the Tamilnadu government released its first-ever draft “Resettlement and Rehabilitation Policy” for public comment.  While long-awaited, the policy is also premature. It is not anchored in a comprehensive housing and habitat policy that defines a framework for affordable housing, slum clearance, and land use in which the relocation of slum dwellers to remote peripheries is specified as a last-ditch option. Instead of leveraging Chennai and Tamilnadu's rich history of implementing innovative and inclusionary models of slum rehabilitation and affordable housing, the policy implicitly clings to the tired and discredited model of mass peripheral resettlement and threatens to perpetuate it further.
By Karen Coelho  |  December 6, 2021

In Chennai, where involuntary resettlement of slum dwellers has been practiced for at least two centuries, the last two decades alone have seen over 55,000 families forcibly moved to large state-built ghettos outside the city. In the absence of a policy, these relocations have been governed by ad hoc government orders or by guidelines of specific projects or funding agencies.

In October 2021, the Tamilnadu government released its first-ever draft “Resettlement and Rehabilitation Policy” for public comment.  While long-awaited, the policy is also premature. It is not anchored in a comprehensive housing and habitat policy that defines a framework for affordable housing, slum clearance, and land use in which the relocation of slum dwellers to remote peripheries is specified as a last-ditch option.

The draft policy aims to “ensure that slum dwellers are treated fairly and humanely when they are resettled from objectionable poromboke lands”. But resettlement needs to be located within an explicitly stated vision of integration and inclusion of vulnerable communities into the mainstream.  Instead this policy restricts its scope to managing procedures for eviction and resettlement.

Mass ghettos on the peripheries of cities have emerged all over the country as the default mode for rehousing the evicted urban poor. The consequences have been well documented. In places like Bawana, New Delhi, Vatwa, Ahmedabad, and Mahul, Mumbai, scholars, journalists, and fact-finding committees have highlighted the enduring pathologies produced by these poorly serviced colonies.  While broken livelihoods are widely recognized as the most serious impact of resettlement, a host of other problems like alcohol and substance abuse, criminalization of youth, and safety threats to women and girls are also endemic to these sites. Many residents sell or rent out their allotments and return to informal settlements in the city to safeguard their painstakingly crafted pathways to a better life.

A resettlement policy, dealing as it does with the city’s most vulnerable populations, must be visionary, proactive and far-sighted.  It should ensure minimal disruption of the ecologies of survival and mobility that these households have constructed over time.  If it needs to uproot them, it must ensure that the state does everything it can to support their rapid re-integration into the urban mainstream and improve their lives.  Delhi’s slum rehabilitation policy recognizes this by defining in-situ rehabilitation as its principal strategy, with relocation envisaged only “in rare cases”.

Chennai has a history of implementing innovative and inclusionary models of slum clearance. Tamilnadu historically led the country in providing large-scale low-income housing through land acquisition or by regularizing and upgrading informal settlements. The sites and services projects of the 1980s, which produced around 57,000 plots in Chennai, proved scaleable, cost-effective, and successful in facilitating socio-economic mobility for their residents over the long term. The projects built mixed-class and mixed-use neighborhoods by providing plots of varying sizes for different income groups on state-acquired land, and incorporating industrial and commercial spaces within the sites. By allowing families to design, build, and incrementally expand their homes to accommodate growing families or rental units, these schemes vastly expanded the supply of affordable housing over time with minimal outlay by the state.  Despite their peripheral location, they were sited near existing developments where trunk infrastructure such as roads, water supply and public transport was already available.  Thirty years later, they have emerged as thriving and dynamic neighbourhoods, well integrated into the urban fabric.

Instead of leveraging these achievements to allow low-income families to consolidate their foothold in the city, the Tamilnadu resettlement policy implicitly clings to the tired and discredited model of mass peripheral resettlement.

Founded on Evictions: The policy defines its scope as resettling people evicted “for implementing court orders, other developmental projects or enforcing various acts or rules”.  In other words, it simply subserves the government’s implacable intent to remove “encroachers” – defined as non-titleholders — for a wide range of discretionary purposes ranging from mitigating disaster vulnerability to clearing land for “smoothing traffic” or for various infrastructural or developmental projects.  Since a large proportion of urban land across Indian cities, including plots purchased and registered, lack the holy grail of legal title, the policy builds on a foundation of widespread vulnerability to eviction without recourse. Contrast this with Orissa’s award-winning slum rehabilitation project which is transforming urban economies and futures by giving land rights to slum dwellers.

Deliberate Ambiguity: Despite pious language, the Tamilnadu draft policy is churlish about any real commitments to integration.  For example, in addressing the crucial question of distance, it stipulates that travel time by bus or train “should not be more than half an hour to reach the nearest urban areas from where people are expected to be relocated”.  This is, perhaps deliberately, ambiguous.  The “nearest urban area” could be a small town. A resettlement colony sited a 30-minute bus ride from a small town can effectively ruralize urban workers, as has occurred in the Gudapakkam resettlement colony built in 2014, about 50 km from Chennai city.  A clear stipulation of the maximum distance from the previous residence would do the job that this clause pretends to be doing.  The Delhi policy, for instance, specifies that the alternate accommodation will be provided “within a radius of 5 km”.

Build now, service later: A sensitive policy would build measures to ensure the adequacy, quality and timeliness of amenities in resettlement sites.  While “integrated townships with all amenities” has been the stated norm for two decades now, resettlement colonies saw these amenities arrive slowly, haltingly, sometimes a decade or more after the move, often following sustained pressure from residents and activists, and often too late to prevent the irrevocable breakdown of fragile livelihood and educational trajectories.  High drop-out rates, of women from the labor force and children from schools, have been the norm in these colonies.

Given this record, the resettlement policy must demonstrate a more convincing intent to provide decent service standards at the new sites. “Transport facilities” cannot mean starting with a few bus routes and increasing them over time, but must comprise adequate, reliable and affordable arrangements before resettlement to ensure that workers seamlessly maintain their links to their workplaces.  Livelihood support cannot simply mean “skill development training” which almost surely will not translate into employment for an over-40-year-old vendor from the city.  Most crucially, an effective policy must engage seriously with the complex of problems that render these settlements unsafe for women, children and youth.

(A version of this piece, with a different title, appeared in The Hindu on November 19, 2021).

Dr Karen Coelho is an urban anthropologist and Assistant Professor at the Madras Institute of Development Studies, Chennai.