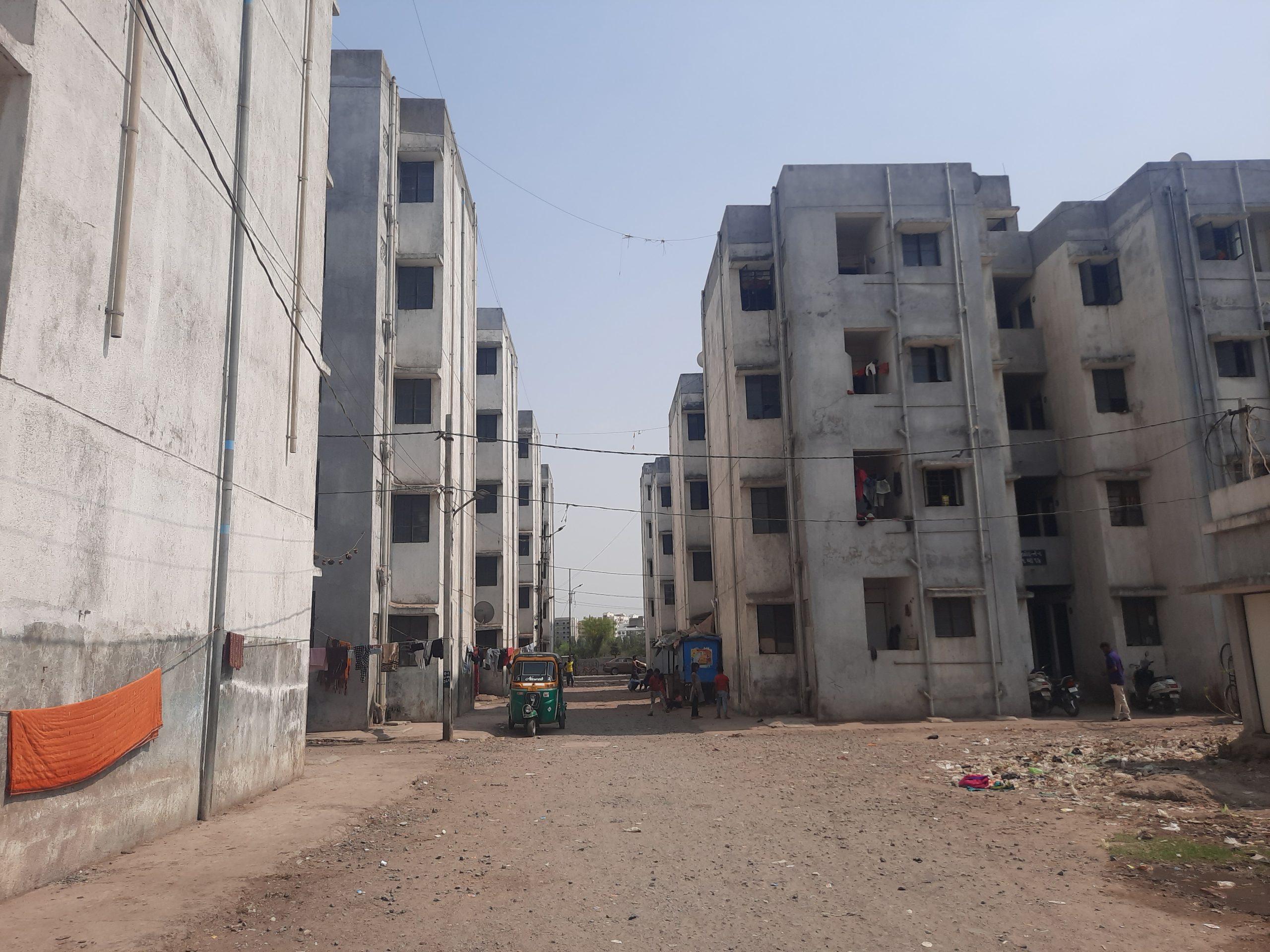 One Year of the ARHC Scheme: State of Play

In July 2020, the Ministry of Housing and Urban Affairs, Government of India, announced the Affordable Rental Housing Complexes (ARHC) scheme, as a sub-scheme of the Pradhan Mantri Awas Yojana—Urban (PMAY-U). ARHC aims to address the housing needs of the urban poor and migrants through rental housing, brought to national attention by the reverse migration triggered by the COVID pandemic-induced lock-down. The ARHC scheme is co-terminus with the PMAY-U mission period, that is, March 2022. With a few months left to call for bids and award projects, this piece assesses the state of play in the scheme’s implementation—its emerging modalities, stakeholder engagement and current status—given its importance as India’s first national rental housing scheme.
By Swastik Harish and Harshal Gajjar  |  October 13, 2021

In July 2020, the Ministry of Housing and Urban Affairs (MoHUA), Government of India, announced the Affordable Rental Housing Complexes (ARHC) scheme, as a sub-scheme of the Pradhan Mantri Awas Yojana—Urban (PMAY-U). ARHC aims to address the housing needs of the urban poor and migrants through rental housing, brought to national attention by the reverse migration triggered by the COVID pandemic-induced lock-down. The ARHC scheme is co-terminus with the PMAY-U mission period, that is, March 2022. With a few months left to call for bids and award projects, we assess the state of play in the scheme’s implementation—its emerging modalities, stakeholder engagement and current status—given its importance as India’s first national rental housing scheme. There are two models in ARHC: Model 1 aims to bring vacant government-funded affordable housing stock back into the housing market as rental housing through private concessionaires, and Model 2 aims to encourage private parties to contribute their own land and build and operate rental housing. Both models offer certain Central and local government incentives.

At the time of writing, there seem to be no proposals for Model 2 on the scheme’s website. We therefore focus our inquiry on Model 1, for which MoHUA has identified just over 210,000 housing units across 324 cities. To encourage quick uptake of the model, MoHUA drafted a standard Request for Proposals (RFP) document that public housing owners can use to invite concessionaires to repair/retrofit and develop public vacant housing stock into affordable rental housing complexes, operate them for a period of 25 years, and eventually transfer them back to the government. There are currently 22 RFPs issued, concentrated largely in three states, as shown in Table 1 below.

The key components of these RFPs are:

As of 18 August 2021, approximately 4,000 ARHC units have been awarded to concessionaires, across projects in Ahmedabad and Surat in Gujarat and the Union Territory of Chandigarh. However, the singular techno-financial project focus of the standard RFPs don’t seem to address known challenges to the ARHC. The Engineering Procurement Construction (EPC) form of the RFP has little tactical engagement with the complex housing needs of the urban poor and migrants. It will be useful to understand the nature of engagement between these key stakeholders, contracting authorities and bidders/concessionaires to assess the potential of these projects to respond to the scheme’s motivation. We do this by: (a) closely tracking MoHUA’s website for details on the RFPs and the ‘corrigenda’ that clarify bidders’ queries; (b) discussions with contracting authorities, bidders and concessionaires; and (c) visiting some vacant housing sites that have been awarded for ARHC. In the future, we aim to continuously track developments in this way, in order to understand the trajectory of the scheme’s implementation.

The ARHC is administered and monitored through a comprehensive Management Information System (MIS) that is hosted on MoHUA’s website. The MIS enables contracting authorities to post their RFPs as well as other key information such as important dates and the corrigenda mentioned earlier. This centralized database is an invaluable source of information, the ease of access to which is refreshing and highly commendable. A summary of the proposed projects, as publicly available is presented below in Table 2.

We find that rent has been set at quite affordable levels—the weighted average rent of the above is just over ₹2,500 per month—which matches quite closely the rent paid in the private rental housing market. This is very heartening, and clearly illustrates the intention of the government to keep the ARHC houses affordable to the targeted range of urban residents. However, the MIS is as yet unable to provide accurate locations of the proposed projects, which is a critical determinant of the trade-off that urban poor and migrant households may be willing to make between affordability, quality of housing and access to work and other needs.

We note that the RFPs are all nearly completely standardized, and focus on the immediate repair/retrofit project. They contain little by way of conditions on important questions such as the management of public social rental housing. The engagement between bidders and the contracting authorities emerges in various corrigenda to the RFPs, posted after receiving inquiries from the latter. Bidders are clearly concerned about what they consider an underestimation of repair/retrofit cost. Several say that the government’s estimates are far lower than their own, and that the proposed VGF will not cover the capital expenditure gap. A number of bidders question the set affordable rent, and inquire if they could charge more, as they estimate higher maintenance costs. Some press this point further and ask if existing residents could be also be charged rents and/or maintenance, as several projects are in fact already partly occupied by beneficiary households from other schemes.

The government, for the most part, shrugs off questions around existing residents, sometimes stating they have no information on them. Further, there is no change allowed in set rent or VGF amounts or modalities. Critically, they do not provide clarity on maintenance costs, which is completely left to the concessionaire’s capacity and resources. A significant concern of bidders is the government’s assumption of occupancy in the project, to which revenue sharing is pegged. There is no relaxation provided in the responses with respect to this, and further, the clause that the revenue share of the government will increase if occupancy is higher than 80% is, in fact, underlined. This could jeopardize concessionaires’ initial cash flows, as they would have to bear the risk of paying a fairly high premium to the government, even as occupancy increases over a period of time to the required level. For example, one bidder suggests that the share of revenue could be pegged to 50% occupancy at the beginning and ramped up to 80% over 5 years.

Our central concern is that the RFPs leave beneficiary selection to the concessionaire, which is a potential risk to the aim of the scheme. In our discussions with contracting authorities and concessionaires, it emerged that rental broker agencies were likely to be hired to make lists of beneficiaries. We speculate that concessionaires will de-risk their premium payment by offering affordable rental accommodation exclusively to employees of companies or other agencies, through such outsourcing mechanisms. While this is sound financial logic, it will likely hamper the government’s aim of addressing housing needs of migrants and the urban poor, who are most often in informal employment.

It emerged in our discussions with bidders that, with rigid repair/retrofit costs, no clear direction on maintenance liabilities and a risky premium payment structure, all within a revenue model with capped rents, they are skeptical about the profitability of the model. This is further evidenced by the language of their queries, and by repeated attempts at issuing RFPs for the same projects. We visited one such set of sites at Harani and Sayajipura in Vadodara, Gujarat. Located far from the city center, near the airport, these sites seem to have 70-80% vacancy. It is not known whether these vacant houses were never allotted or if the residents left them. Existing residents have a history of eviction from their previous place of residence which was relatively much closer to the city center. Many residents still travel to the city for their livelihoods, as there are not many opportunities here. The overall quality of the project site and the buildings also leaves a lot to be desired. Residents claim that water supply is a major problem they face, despite a claim to the contrary in the associated RFP. There seems to be a significant waste management problem. None of the residents had heard about the ARHC scheme and that some of the houses here would be converted into rental housing. Several residents were looking for pathways out of their current housing situation, leading to what may be a reversal to the ARHC bidders’ hopes of charging maintenance fee from them.

From the ARHC MIS and discussions with bidders, we were able to conclude that a number of them did not take their proposals forward after receiving responses from the contracting authority. In a recent discussion with a contracting authority in a South Indian state, it further emerged that the government was finding it difficult to conceive the RFP given the known challenges with respect to the location of their housing projects. At the same time, some bidders were interested in the new experience and opportunity to expand their government work portfolio (though unconfirmed, one of the bidders turned out to be the EPC contractor for the original project). However, we found that most companies predominantly undertake construction and civil works, and have little or no prior experience in the development and management of affordable housing.

This is coupled with another significant issue—the shallow approach and involvement of the local body or contracting authority. Further, we find it simply unacceptable that the local body/authority does not in any way overlook the selection of beneficiary households or eventual tenure management. This focus needs to grow towards checking the viability of the project as a housing scheme; alleviating location issues; working with Non-governmental Organizations (NGO) and other civil associations to understand demand from segments that are particularly vulnerable or excluded in the housing market, such as women; imagining value-adds for the intended beneficiaries, and finally; building robust capacity to run and supervise a rental housing scheme. This approach will enable sustained occupancy in rental housing projects, that in turn will help achieve their stated objective of providing ‘ease of living’ for the urban poor and migrants.

The scheme’s modalities at the moment seem largely procedural—with a near single-minded focus on the financial architecture and cost recovery. As of now, there seem to be little effort by the government or the concessionaires for engagement on the question of solving the complex housing problems of migrants. We hope that the government can, a) lead a concerted effort to build capacities on how to plan and implement rental housing schemes that can enable sustained occupancy, and b) understand and support improvement of existing rental housing options—the massive network of dormitories, small landlords and Paying Guest (PG) accommodations in our cities—knowing that while they are imperfect, already achieve several of the ARHC’s aims.

Harshal is a graduate of urban planning from CEPT University, Ahmedabad and public policy from Azim Premji University, Bangalore. He is currently an external consultant with the Indian Institute for Human Settlements, Delhi where he researches on affordable housing, urban entitlements, and informal self employment. Harshal is also one of the four coordinators of the Main Bhi Dilli Campaign, a civil society collective engaging with the preparation of the 2041 Master Plan for Delhi.