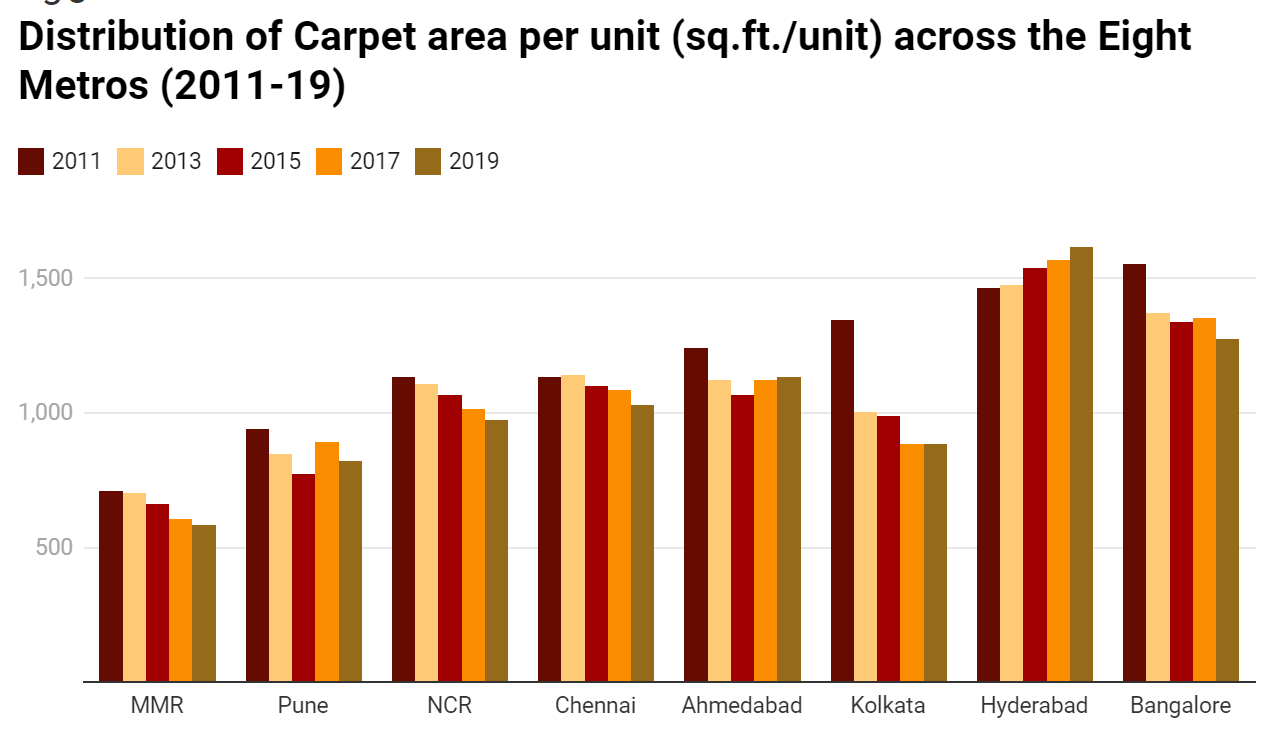 The private residential real estate market in urban India is diverse, and housing typologies vary within and across geographies. This series of data pieces will try to highlight some of the characteristics of private real estate market in India across selected geographies between 2009-2019, based on data provided by Liases Foras, India's only non-broking real-estate research company.

The private residential real estate market in urban India is diverse, and housing typologies vary within and across geographies. While there is an increasing trend of living in flats instead of traditional independent housing across various tiers of cities, new typologies like row housing or bungalows are also emerging in line with changing consumer profiles and land-use development in larger cities.

This series of data pieces will try to highlight some of the characteristics of the urban private real estate market in India across selected geographies between 2009-2019, based on data provided by Liases Foras, India’s only non-broking real-estate research company.

What are the Aggregate Trends?

Distribution of Real-Estate Market in terms of Saleable Value (INR)

Before getting into the diversity of residential real estate typologies in India’s cities, it is useful to get a sense of the aggregate market size in terms of total saleable value across the eight major metropolitan cities. Fig 1 shows the evolution of market share in terms of total saleable value (INR) from 2009-19 across the eight metros. It can be seen that the distribution of markets by saleable value is largely concentrated across the Mumbai Metropolitan Region (MMR) and National Capital Region (NCR), with these two markets comprising nearly 60% of the total saleable value of real estate in the country. The share of MMR between these two remained constant or slightly up over the recent years, while NCR, where private real estate is mostly concentrated in the peripheries, has registered a declining trend. The only other significant city with a sizeable market share is Bangalore, which has registered a constant 15% share over time. The share of other metros together has hovered around 25% over this period.

While the distribution of saleable value provides us an economic overview of real estate development across various geographies, it is also worthwhile to check how these values are created: are they rooted to equally high proportion of size of real estate or is it an amalgamation of smaller units, concomitant to the varied spatiality of the cities? The share of aggregate carpet area (not adjusted by number of units built) in each of the metros have shown that the largest share of built-up is concentrated in NCR and the MMR cluster, which constituted about 47% of the total carpet area in 2011 but declined to 41% in 2019. This decline is primarily attributed to the NCR, where the share to total built-up has declined from 37% to 26% within the same time-period. The share increased marginally in the MMR and dropped marginally in the case of Bangalore, which has the third largest share of total carpet area built over time. Overall, the distribution of total carpet area has evened out over time, unlike the total saleable value across the eight metros.

Other than the overall magnitude of building activities across various geographies, the temporal share of carpet area per supply unit shows a different story. It can be seen from Fig 3 that the average size per building unit is highest in Hyderabad, where it has gone up over time. This is very different from the two major contributors of total carpet area: MMR and NCR, both of which have reported a drop in per unit carpet area within 2009-19. For example, the median size of an apartment in Hyderabad is 1092 sq.ft., which is 603 sq.ft. in case of MMR and 885 sq.ft. in NCR. MMR has the lowest per unit carpet area for all kinds of properties combined (apartments, open plots, villas and floors), followed by Pune, Kolkata and NCR. Other than Hyderabad, the per unit carpet area has dropped for all cities over time, where the largest change is reported in case of Kolkata.

The following matrix summarizes the aggregate scene of private real estate in the eight metros, as per the annual situation of 2019. For example, the real estate landscape of MMR and NCR are a relatively larger amalgamation of small-size high value (in terms of total saleable value) properties, while Bangalore is a case of relatively larger built-up composed of high value and larger size properties. This is useful to understand the diversity of the aggregate picture of private real estate across Indian megacities.

Nature of Real-Estate Development across the Eight Metros: Aggregate Picture in 2019

Source: Liases Foras Database, 2019
The low and high criteria is devised on the basis of median of the total saleable value, total carpet area and carpet area per unit

How are Urban Areas outside the Metros doing?

The Liases Foras database provides information regarding the private real estate market in 41 different cities besides the eight major metropolitan areas. These cities are termed as ‘Non-metros’ in the present context, though they include a diverse range of urban areas, from state capitals to economically important cities of various states like Coimbatore, Mangalore or Ludhiana. The population of these cities range from below 10,000 (Neemrana in Rajasthan: 7143) to million-plus cities like Rajkot (1.3 million). The share of total saleable value and total carpet area of these cities (together) to all the cities in the database has gone up steadily from 2011-19 (Fig 4), a fact contingent to decentralization of emergent housing types outside the metros. The unit size of properties in these cities has also increased over time, from 1023 sq.ft. in 2009 to 1152 sq.ft. in 2019.

The aggregate trend of the private real estate market shows wide variations across geographies and time. The next part of this series will dive deep into the development of real estate across the cores and peripheries of these cities.